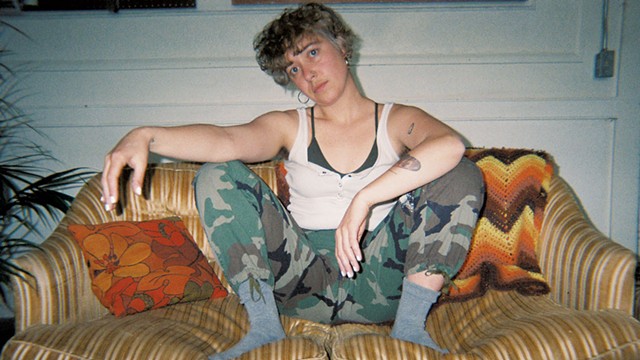 As she twirls chopsticks over a plate at Pho Hong, Brittany Mae comes to a conclusion: "It's all about nourishment," the 32-year-old Burlington musician and onetime farmer suggests. An unforgiving sun beats down on a brutally hot day, but Mae's eyes widen behind her sunglasses as she reflects on her two loves — food and music.

"I love to cook, but I hate to do it for myself," she continues. "I just want to feed people. I want to nourish them, enable them to pull down their own walls, even if it's just for a few minutes."

Mae, who goes by Ivamae as a musician, sits back in her seat and reflects on that statement. She's dressed casually with a bohemian flourish suggesting a laid-back cool. While challenging, the past year has been one of revelations, she says, particularly as an artist.

"I know now that I can't create from any other place than the deepest wells of my emotions. I can't write a song unless I have something to fucking say," she explains. A smile lights across her face, and she adds, "It feels really, really good to have something to say."

"I want people to feel what I feel." Brittany Mae tweet this

On June 25, Mae digitally released her debut full-length album, Tender Meat; a vinyl edition is due in August. Four years in the making, the recording is a lush, colorful collection of neo-soul and R&B that reflects some of Mae's current inspirations, such as Nick Hakim and Moses Sumney.

It also brims with Mae's talents. She is a deft, clever guitarist, which her abilities as a singer-songwriter sometimes obscure. Her warm voice conveys a hidden story that can instantly pull the listener into a song's orbit.

But as Mae suggests, the crux of Tender Meat is in what she has to say in her frank, confessional songwriting. On "The Reality of It All" she sings, "We were naked and I told you / I want another soul to fuck me / Another soul that will love me / I'm heavy, and trust me, you don't want to bear this weight alone." Throughout the album, Mae turns her songs into mutual therapy sessions, offering catharsis for singer and listener alike.

"The records I love ... you hear the pain and the elation of the artist," Mae says. "It's what happens when an artist is being true to themselves, and I feel like I absolutely fucking did that."

Backed by some of Burlington's best musicians, including Urian Hackney of Rough Francis on drums and transcendental ambient guitarist Tom Pearo (who also mixed the album), Mae has created a debut record of uncommon power. It also took an uncommonly long time to come together.

"I'm a total workaholic," Mae admits. "I push myself, and I crash. That's why the album took so long, I think: I'd push, then crash, then repeat. I had to learn to let go of how I wanted it to sound."

Mae explains that when she started recording the songs in 2016, which would eventually coalesce into her debut, she felt pressure to conform to a style that wasn't necessarily hers.

"You can try and fit in and be cool enough. But if you're not careful, you won't be yourself," she says. "You just end up putting something out that is completely inauthentic. And to hell with that."

Until she was in her mid-twenties, Mae thought of music as a hobby, something to do in between farming and cooking, her passions at the time. But as she started writing her own music, she began contemplating a life change. Her early songs were written from places of pain. They were written, she reveals, because she didn't feel like she was good enough.

"But as I got older, and better, the songs morphed into a celebration," she says. "They came to encapsulate my growth."

With a new sense of purpose and confidence, Mae pursued music full time. To keep herself grounded, she set out with several clearly defined goals.

"I wanted to prove I could do something that I didn't think I could do," she says. Then holding up three fingers, she explains, "I told myself that I wanted to make a record, press the record to vinyl and then go on tour."

Which is exactly what she did, though not quite in that order. In early 2020, Mae threw her gear into a van and drove from Vermont to Seattle and back, playing a 25-show tour.

"The night I came back, I was so inspired and validated," she recalls. "I was ready to put the record out in the summer and get back on the road in the fall."

Soon after, the pandemic hit.

"Everything shut down, and I was like, 'Well, guess I don't have to worry about finishing the record,'" Mae says.

Mae credits Pearo, Hackney and bassist Dan Bishop with keeping her long-gestating project going at different stages. "Those guys all believed in me when I needed that so badly," she says. "They didn't pressure me; they gave me space to be emotional, and I'm incredibly grateful for that."

For Pearo, there was never a question about Mae's method.

"I first saw her play at a party I threw years ago," he recalls in a phone call. "She picked up this nylon string guitar and started to play a song. I fell completely out of my chair when I heard her voice."

"The thing I just kept saying to Britt as we went was not to cut corners," Pearo says. "I wanted her to make this record in her time."

"Britt and I were roommates for a while back then," he says. "Our friendship really strengthened making this record. The vibe was so good. She's an emotional person and so am I, and I think that just locked in a feel."

The drummer and producer, who also plays in Detroit post-punk act the Armed, recalls breaking up the monotony of recording by popping out of the studio late at night to dance.

"We'd go see DJ Taka at Radio Bean and just start getting ideas," he says. "If the album got too much, we'd start working on this booty-house project. It's still in the works, though it'll probably be about 10 years on that!"

Tender Meat is a reflection of Mae as an artist, but it's also an acknowledgment of her personal struggles.

"I used to self-medicate a lot more," she says. "But now I use therapy, and I do personal work; I've been digging into my insecurities.

"What's the point of doing something you love if you're hurting yourself in the process?" she continues. "Shouldn't the art nourish you and nourish the people around you? It should be a holistic system."

Emboldened by that idea, Mae says she no longer worries about audience size or album sales or Spotify plays. Rather, her goal is to facilitate an emotional transfer between her and her audience, whether on record or, at some point soon, in person.

"I want people to feel what I feel. And they're not going to feel it unless I put those emotions into them," she explains. "If I can make someone cry at my show, then I've done what I wanted to do."