It's "Way to Go! Week," But Vermont's Bike/Ped Projects Are Treading Water 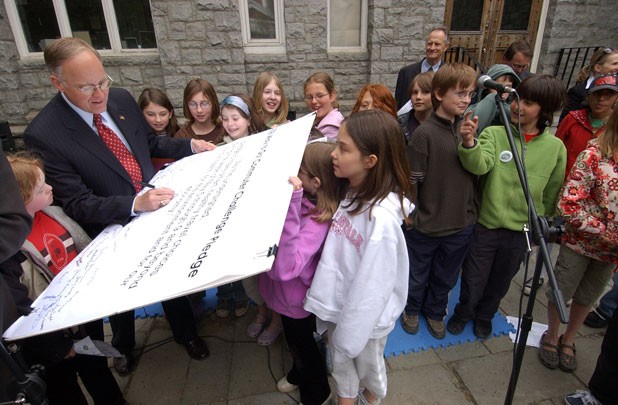 Gov. Jim Douglas was talking the talk at last Thursday's kickoff of the 2008 "Way to Go! Commuter Challenge." The annual springtime event is meant to encourage Vermonters to incorporate more eco-friendly travel alternatives into their daily commute, such as bicycling, walking, carpooling and public transportation.

Surrounded by five Vermont mayors and fifth-graders from Union Elementary School in Montpelier, Douglas signed a pledge to "make smart, healthy travel choices" this week, just as nearly 2000 other Vermont commuters did during last year's challenge.

The event, which runs through May 9, is good for the environment, good for the economy and good for our wallets, Douglas told a crowd of 80 people in the Christ Church pocket park in Montpelier. Organizers predicted that in one week alone, the commuter challenge will cut private vehicle usage by 600,000 miles, rid the air of a half-million pounds of greenhouse gases, and save Vermonters $100,000 in travel expenses. "Vermont is the greenest state in America," Douglas said. "That was in Forbes' magazine, so it must be true."

Must be. But asked afterwards how he intends to "go green" to work this week, Douglas was a bit more cagey. Clearly, cycling to the Statehouse from his home in Middlebury was out of the question - though his Secretary of Transportation, Neale Lunderville, said he planned to bike to work from Burlington at least once this week, an 80-mile round-trip pedal.

Take the bus, governor? Sorry, he said, but it's impractical for him to spend an hour riding north to Burlington only to head south again for another 45 minutes. Carpooling? He'd have to check his schedule. The governor did point out that he switched from his predecessor's vehicle, an SUV, to his current ride, a Chevy Impala, but couldn't say what kind of gas mileage the car gets. "I know it's better than an SUV."

Perhaps Douglas can be forgiven for not taking advantage of the limited transit options between Middlebury and Montpelier. But that's the whole point, say bike and pedestrian advocates. They complain that when it comes to transportation spending in next year's budget, neither Douglas nor the legislature is devoting enough to alternative modes of transportation all year round.

"What direction do you want Vermonters to go in the future?" Nancy Schulz, executive director of the Vermont Bicycle and Pedestrian Coalition, said last week. "If we really believe that obesity is a problem, if we really believe that global warming is a serious problem, and fuel prices and health-care costs and traffic congestion and parking shortages . . . then you can't say that you care about all these issues and do what you're doing to bike/ped. They just don't jive."

Schulz and other bike/ped activists did celebrate one small victory late last week. A legislative conference committee removed a provision from a bill that would have frozen all future bike/ped projects under the federal "enhancement grant" program. The state hasn't been accepting applications for new bike/ped projects under that program since 2004, when, according to Lunderville, it was determined that there were already enough projects in the pipeline to last until 2013.

But administration officials also say that while funding for bike/ped projects is down slightly this fiscal year - $5.5 million in 2009 versus $6 million in the 2008 budget - transportation dollars are tight all around.

"We have to focus on those things that we can't live without, like bridges," Lunderville said. "Which is not to say that bike and pedestrian projects aren't important. But they're part of the overall matrix of what we're doing."

Moreover, as Lunderville pointed out, many of the road and bridge projects being done by the Vermont Department of Transportation incorporate upgrades and improvements that benefit cyclists and pedestrians, but aren't necessarily captured in the statistics, such as the $12 million for shoulder widening and sidewalk repairs. "I do a lot of biking myself," Lunderville added, "and the difference between 1 foot and 3 feet of shoulder can make a world of difference."

Currently, the state has nearly $39 million "in the pipeline" for future bike and pedestrian upgrades, asserted VTRANS spokesman John Zicconi, not including the $5 million federal "Safe Route to School" program to build infrastructure so kids can walk or bike to school.

"Somewhere out there people are getting the impression that we're stopping bike/ped projects," Zicconi noted, "and that's just not the case."