As memories of social distancing recede, Vermonters can again experience the delight of summer bake sales. After eyeing a sea of flaky crusts, oozing berries and swirly meringues, I like to select the most appealing slice and say, "Ma'am, could I have that one, please?" (Nothing makes me drop "ma'ams" like the presence of women bearing desserts.) Knowing that an impending sugar bomb benefits worthy causes makes those calories especially worthwhile.

Women have held bake sales for charity since at least the 1800s. In a 2016 story for the National Museum of American History, Daniel Gifford wrote that in the days before women could participate fully in business and politics, they funded and promoted social causes by selling baked goods. During the Civil War, such female organizers made significant donations to schools, churches, hospitals and suffrage advocacy. 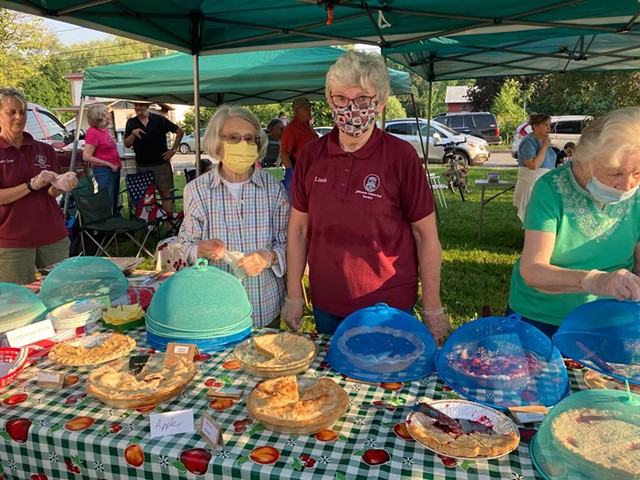 Weekly music series Tuesday Night Live, held on Legion Field beside the elementary school, is easily the most anticipated event in Johnson. It's also one of the most delicious, thanks to the Johnson Historical Society, whose members sell hot dogs, pies and cake at every concert.

The first event also featured 20 pies baked by volunteers, including a darn fine rhubarb pie with almonds, and a buttery German chocolate cake made by my neighbor Alice Whiting.

Lois Frey, recording secretary and a founding member of the Johnson Historical Society, said the group began selling baked goods at Tuesday Night Live in the summer of 2007, shortly after its formation.

"One of our members suggested that there were a lot of excellent pie makers, and people loved homemade pie. 'How about if we gave it a try?'" Frey recalled.

Over the years, Frey has logged trends in people's pie-eating preferences. "When the blackberries come out, we don't have enough blackberry pie. Same for Linda Jones' apricot pie. There's the maple pie [and] pies with and without nuts. There's a strawberry cream pie, which is to die for," she said.

Four bucks a slice adds up: In 2019, the society took in $5,500 from baked goods for its general operating budget.

What Frey likes most is how the event brings in "the whole community. It's really representative of all the different generations. The youngsters are scooting around and having a good time, and the old folks are up there selling pies," she said. "Folks come just to visit and listen to the music, and then you have everyone in between." 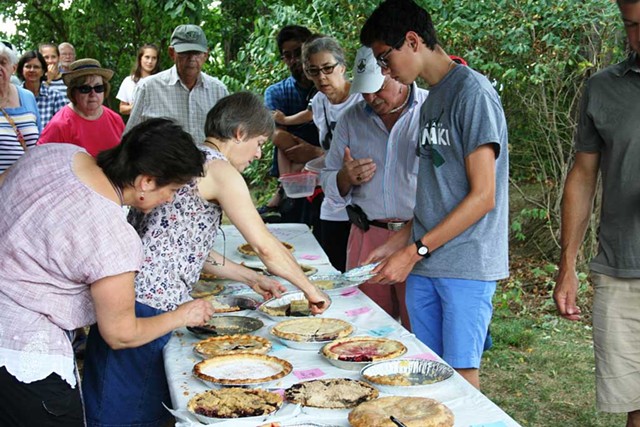 The Rokeby Museum Pie and Ice Cream Social has been an annual event since 1985, said director Lindsay Houpt-Varner, with last summer the rare hiatus. Over the years, she added, it has become a community gathering. This year's social will have a band, badminton and croquet, and the museum will open its doors to the public for free.

"For some people, it's the one time a year they come to the museum, and I think it's a wonderful way to open up to the public," Houpt-Varner said. Attendees can explore the Rokeby's buildings, grounds and historical farm, which was once a stop on the Underground Railroad.

A "diverse mix of people" helps make the pies, Houpt-Varner said, including women, men and younger community members. Former board trustee Maisie Howard organizes the social and hosts a "pie bee": People gather at a supporter's house to make "as many pies as they can." (The opportunity to bake together in close quarters is reason enough to celebrate.)

This year, the museum aims to serve 50 pies. A slice served with a scoop of ice cream goes for $6.

Houpt-Varner became the museum's director last September, so this will be her first social. But she's traced the event's history in decades of Rokeby annual newsletters and found old signs advertising the social tucked away in buildings on the property.

Perhaps most importantly, board members and volunteers have clued her in to the social's pie-making heavyweights — "I have heard amazing things about Donna Leary's blueberry pies," she said — and its traditions.

"It's been rumored I'm getting a pie in the face as part of the fundraiser. I'm hoping that's a blueberry pie, as well," Houpt-Varner said with a laugh. "I'm always game for something if it's for a good cause, and the museum's a good cause." 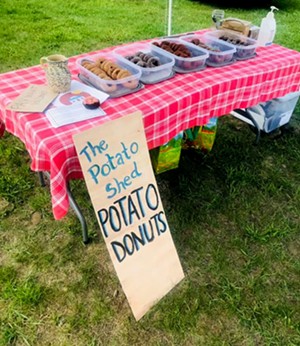 In early 2021, East Hardwick filmmaker Elizabeth Rossano found herself baking more doughnuts than she and her pod could handle. She came up with a simple solution: Give them to her neighbors and strangers for free. Having recently moved into a new home, she found the gifts allowed her to connect "to all kinds of people that I wouldn't have naturally."

Rossano's new house had been built on the site of a potato shed, so she began making potato doughnuts, using a recipe in the long-defunct New England Magazine. Energized and wanting to support their community, she and her husband, Griffin Lussier, hatched a plan to give away their potato doughnuts.

In the frigid cold of mid-January, the couple put up a "Free Community Donuts" sign in a parking lot near the crossroads of Hardwick's highways 14 and 15. It was 6 a.m. on a Monday: "the worst part of the week," Rossano said.

The first day, they brought 50 doughnuts; two people stopped by. Rossano felt embarrassed, she said, but spread the word and kept trying.

After the third or fourth week, she said, it caught on. “I was having so much fun making these, and when I give them to people, it fills me with joy to hear their feedback,” Rossano said. The couple continued giving out free doughnuts early on Monday mornings for 12 weeks, though some takers insisted on tipping them.

In May, Rossano dubbed her goods Potato Shed Potato Donuts and set up a stand at the Hardwick Farmers Market, where she gave them away and took donations to benefit the East Hardwick Grange, a local events venue.

"People were there before the market started, waiting to get the doughnuts," she said. Her stand sold out in an hour.

Switching up the goods, but sticking with potatoes, she and Lussier sold 100 pounds of French fries at the East Hardwick Children's Parade in June. At a buck per serving, their stand raised a sizable sum, all of which they donated to the parade.

On August 6, Rossano will return to the Hardwick Farmers Market with her "gift doughnuts"; the proceeds will benefit the remodeling of Hardwick's Jeudevine Memorial Library. She hopes to pull off another French fry event this summer, as well.

Rossano said the inspiration for her gift doughnuts was Chez Mami Catering, Adam Woogmaster's pay-if-you-want taco truck in Marshfield. Woogmaster was her manager when she worked at Montpelier's Positive Pie a decade ago.

"I want it to be totally accessible and for people to be able to have a doughnut if they don't have any money," Rossano said. She'd find it "most joyful" if other people were moved to contribute to the gift economy. "I was hoping that I'd inspire others to do similar concepts in their own way."