'It's Real': A Franklin County Teacher Recounts Her Battle With Coronavirus 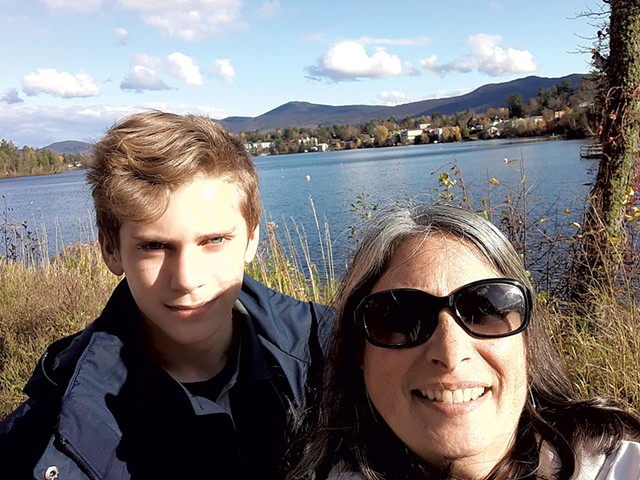 When Nicky Patterson started to get sick last month, she could tell that it was no ordinary seasonal flu.

It began with a persistent cough on Friday the 13th — a day synonymous with bad luck. And though it was typical for the elementary school teacher to be exhausted at the end of a school week, Patterson felt particularly drained when she left the St. Albans Town Educational Center that day in March. When she woke up the next morning, her entire body ached and her head throbbed.

"I had an inkling that I was getting sicker," said Patterson, who is 45. "It felt like a fever was on the way."

By that evening, Patterson's temperature spiked to 101 degrees, and her cough had worsened. A week later, she could hardly breathe when she walked up the stairs.

On March 25, Patterson tested positive for COVID-19, the novel coronavirus that, as of press time on Tuesday, had infected 293 people in Vermont. Thirteen people had died, and more than 20 were being treated in hospitals.

"I just wanted to raise that awareness that it's real, that it's here," Patterson said. "People need to make good choices."

Patterson started taking precautions against the coronavirus around the time when the state announced its first case on March 7. She stopped giving high fives to her third and fourth graders, opting instead for an elbow bump. She went to a University of Vermont men's basketball game but sat in the back row and didn't touch any surfaces or doors. She had been washing her hands for 20 seconds or more.

Patterson has no idea how she got sick or for how long she was contagious before she started developing symptoms. But as soon as she felt ill, Patterson self-quarantined in her St. Albans home, which she shares with her 15-year-old son, Damien. She didn't let her parents, who are in their sixties, come and visit, and she stopped going to church.

That Sunday, March 15, Patterson also notified the school principal that she wasn't feeling well and suggested that her classroom be deep-cleaned before any students were readmitted. That same day, Gov. Phil Scott ordered all schools to close from March 18 through April 6, a directive that has since been extended through the remainder of the academic year.

Related Scott: Students to Stay Home for Remainder of the School Year

Scott: Students to Stay Home for Remainder of the School Year
By Colin Flanders
Off Message

Patterson's doctor initially told her that she wasn't eligible for a nasal swab test because she hadn't recently returned from a COVID-19 hot spot, nor had she been in contact with someone who'd tested positive for the disease. Patterson thought health officials would want to know whether she had the virus, given that she works in a building with 800 students and school staff members, but she relented and took her doctor's advice to stay home and rest.

In fact, rest was all she could do. Patterson got tired doing the smallest of tasks. A few days into her quarantine, she took an hours-long nap after a video chat with colleagues — and that was after getting 10 hours of sleep the night before. Her cough gradually improved, but the exhaustion continued, and she felt nauseous. Though she describes herself as "decently fit," Patterson got winded when she walked up the stairs or did the laundry.

Nine days in, Patterson again called her doctor, who referred her to a drive-up testing site in St. Albans. At her appointed time on March 22, Patterson drove to the Northwestern Medical Center. She sat in her car as a health worker inserted a five-inch-long swab into her nose. The procedure lasted about 10 seconds.

"I just had my eyes closed and tried to just hold my breath while it happened so I didn't cough in his face," Patterson recalled.

The hospital told her it could take up to 72 hours to process the test, which also screened for two strains of influenza and another respiratory virus known as RSV. Getting tested was a relief, but it also hit Patterson that she could be sick with the coronavirus, which has killed more than 30,000 people around the globe and has no known cure. Her anxiety grew.

That night, "I was probably the most scared because my breathing was getting worse, and I couldn't take a deep breath," she said. "I was kind of afraid to go to sleep."

Patterson sought comfort in Bible verses such as Isaiah 41:10, which instructs the faithful, "fear not for I am with thee," and with another age-old healing method: calling her mother.

She fell fast asleep, comforted by the notion that she'd stayed home and hopefully hadn't infected anyone else.

As she awaited results, Patterson camped out in the living room while Damien pitched in by making dinner and doing his schoolwork in his bedroom. When they watched movies, Patterson would sit in the recliner and Damien would take the couch, an effort to stay six feet away from each other, per health guidelines. She lost six pounds. Teaching students remotely proved difficult at times, though she got by with help from colleagues.

By the time Patterson's test results came back positive on March 25, she felt better than she had in days. This week, she's still fighting nausea but is otherwise on the mend. Health officials want Patterson to be symptom-free for 72 hours before leaving the house, so she's still cooped up.

And although Damien hasn't shown any symptoms, Patterson's doctor and the Vermont Department of Health say it's likely he's infected and could be contagious. Once Patterson's symptoms clear up, Damien will be under a 14-day quarantine to make sure he's not sick, his mom said.

So far, Damien has spent his time chatting with friends on FaceTime, watching television and playing board games. Asked what it's like to share such close quarters with a coronavirus patient, Damien was succinct in an email to Seven Days: "Boring," he wrote. Apparently, even teenage ennui can survive a global pandemic.

Patterson considers herself lucky that COVID-19 didn't take a heavier toll on her health and is thankful to still have a job, unlike thousands of Vermonters who lost theirs in recent weeks. That's why she gets frustrated hearing that some people are carrying on with their normal lives and not staying home.

"Some people ... still feel like this is an overreaction," she said. "That is disappointing, because it's real. It's not a political thing; it's not a lie. Real people are really sick and are spreading it without knowing it."

The original print version of this article was headlined "'It's Real' | After battling the coronavirus, a Franklin County teacher urges Vermonters to stay home"