It's Primary Day in Vermont! 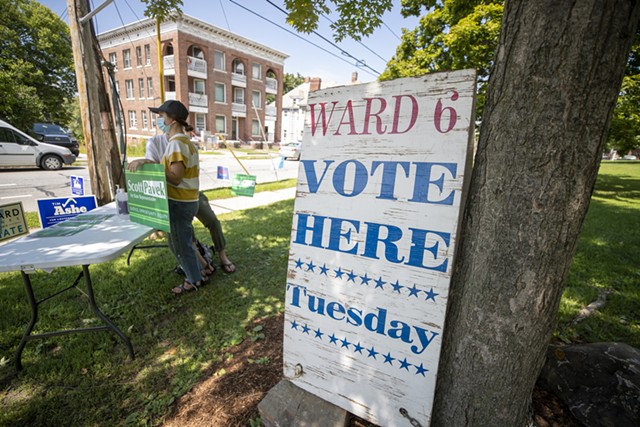 One of the most significant primary days in years has arrived, giving Vermont voters a say in which candidates will represent the major parties on the November ballot.

A wave of retirements — including that of U.S. Sen. Patrick Leahy (D-Vt.), multiple statewide officeholders and dozens of state lawmakers — has created an unusually competitive primary campaign season. Democrats, Progressives and Republicans will all select candidates for the November election.

The burning question now is which woman it will be — Senate President Pro Tempore Becca Balint (D-Windham) or Lt. Gov. Molly Gray? That choice was narrowed after political newcomer Sianay Chase Clifford and state Sen. Kesha Ram Hindsdale (D-Chittenden) dropped out of the race. Another Democratic candidate, Louis Meyers, a Rutland Regional Medical Center physician, remains in the running.

Balint, Gray Work to Seal the Deal as Congressional Primary Rolls Into Final Week
By Sasha Goldstein
Politics
Republicans, meanwhile, have three choices for the U.S. House seat, and two of them are women: Ericka Bundy Redic of Burlington and Anya Tynio of Charleston. A third candidate, Liam Madden of Rockingham, is also running in the GOP primary.

Other competitive and closely watched races include the four-way tussle for the Democratic nomination for lieutenant governor. David Zuckerman, who served two terms as LG from 2016 to 2020, is looking to get his old job back, while three well-regarded candidates — former state representative from Danville Kitty Toll, Rep. Charlie Kimbell (D-Woodstock) and Patricia Preston, president of Burlington-based nonprofit the Vermont Council on World Affairs — are also seeking the post of  governor-in-waiting.

In the GOP primary for LG, Sen. Joe Benning (R-Caledonia County) is running against Gregory Thayer.

And while Condos' retirement was foreseen, former attorney general T.J. Donovan's announcement that he was stepping down and would not not seek reelection was not. That set up a mad dash to succeed him, with Charity Clark, his chief of staff since 2018,  and Washington County State's Attorney Rory Thibault making hurried cases to voters that they should be the Democratic nominee in November.

Chittenden County Democrats will decide whether to nominate Sarah George, the incumbent state's attorney, to serve another term. The progressive prosecutor is facing a challenger, Ted Kenney, in a closely watched primary.

Will Public Safety Worries End Progressive Prosecutor Sarah George’s Sweeping Reforms?
By Derek Brouwer
Politics
As for primary day logistics, poll opening times vary, but they must be open by 10 a.m. All polls must close by 7 p.m., and results from the contests will begin filtering in shortly afterward. You can find results on sevendaysvt.com.

Voters can check the Secretary of State's Office or touch base with their town or city clerk to verify their polling place details.

Voters who requested a ballot but haven’t dropped it into the mail yet should bring it to their polling place on Tuesday. Anyone who lost their mail-in ballot can still vote in person after signing an affidavit about the lost ballot.

“Your vote is your voice; exercise it,” Condos said in a statement. “Our democracy grows stronger when we all vote.”

For anyone looking to do some last-minute research on the candidates, check out the Seven Days primary voters guide here.

This is the first time voters are going to the polls since lawmakers redrew districts earlier this year to ensure that each of the 150 representatives and 30 senators represent an approximately equal number of voters.

Below is a look at the races we've covered.