It’s All Downhill at These Seven Vermont Sledding Spots

Choosing the "best" sledding hills in Vermont is a fool's errand, akin to picking the best beaches in California or the best pizza in New York City. Once the Green Mountain State turns white, word of mouth and a modest amount of searching will reveal a plethora of opportune spots for getting your adrenaline rush on a long, steep downhill run.

Still, it helps to have a few recommendations to get started. Bombing down Lincoln Gap on sleds may be great for a carload of teens, but it's probably not the best choice for families with small children. And, unlike at ski resorts, no one posts green circles, blue squares or double black diamonds on hills meant for sleds, toboggans, tubes and saucers.

The seven slopes listed below are free and on public land unless otherwise indicated. For those who decide to slide on private property, please be mindful of landowners and respect all signage, fences, livestock and parking restrictions. Also, due to the pandemic, some private hills have adopted extra restrictions, so be sure to call ahead or check their websites before heading out.

Finally, regardless of whether you call it "sledding" or "sliding," be kind to your brain and outfit all children and adults with helmets, so that your hill thrills don't end on a downer. 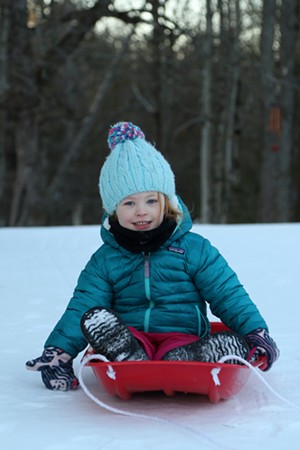 This hill is located on private property, but Burlington-area sledders of all ages have for years flocked here once the snow flies. From the club parking lot, walk west until you spot the obvious downhill run. Depending upon riders' size and appetite for adventure, they can push off at several different points. The terrain is wide and diverse, with a long run-out at the bottom.

Recognizing the public's heightened need for recreational opportunities during the pandemic, in December the country club removed its "No trespassing" signs, effectively permitting people to sled there. But be forewarned: The hill is easily accessible to students from the University of Vermont, Champlain College and much of Burlington, so it can get crowded after a fresh snowfall.

Generations of Underhill residents have enjoyed sledding on this town-owned property, which offers steep and wide-open terrain, with no obstacles or major hazards, and more than 300 feet of run-out at the bottom. Casey's Hill, which gets plenty of use, especially on bluebird days after a major snowstorm, is one of the most scenic spots in Chittenden County for sledding, with excellent views of nearby Mount Mansfield.

This location offers several good sledding options, depending upon riders' skill levels. A large hill to the north is long, wide and gentle, with a run-out that stops at a small creek. The larger bowl immediately to the south, directly behind the Shelburne Post Office, is steeper, faster and bumpier, and eventually leads into the woods. A sign at the post office advises drivers not to park in the employee lot.

This privately owned golf club is close to downtown Hinesburg. From the club parking lot, an east-facing slope starts steep and narrow but quickly opens up into a very wide and long downhill run that eventually banks southward. With the exception of a cluster of trees at the top, the hill provides plenty of wide-open terrain that's safe for sliders of all ages. Be advised that the club does not officially endorse sledding on its property, so sled at your own risk.

By far the most popular sledding hill in Montpelier, Hubbard Park attracts sliders of all ages. Little ones can ride the smaller, gentler hills located to the right of, and just above, the main sledding hill. The Montpelier Parks Department asks sledders and snowboarders who perform jumps to do so on the sides and top half of the hill only and to be mindful of other sliders. And be forewarned: A berm at the bottom of the hill is meant to keep sledders off the road. However, when conditions are icy, it's easy to sail right over it.

Privately owned Sharp Park provides a unique snow-tubing experience. Unlike most sled hills, this one has a tube chute carved into the side of the mountain, similar to a luge or bobsled run, and is more than a quarter-mile long. The mountain offers other spots to ride, but the chute is far and away the best bang for your buck. Speaking of bucks, Sharp Park charges a parking fee of $10 per vehicle. Snow tube rentals are $20, but the parking fee is waived for those renting two or more tubes. Sliding is free with your own equipment.

Note: Helmets are mandatory for all children and recommended for everyone. Due to COVID-19, the bathrooms are closed indefinitely, but hot chocolate is still available for purchase. All visitors are asked to sign in beforehand for contact-tracing purposes.

In the 1970s, Marshall Hill operated as a ski slope with a 450-foot T-bar lift. In August 2013, the Town of Stowe purchased the land and made it accessible to sledders. Today, the south-facing hillside is broad, long and very steep, but the open meadow at the bottom allows plenty of room to slow down and catch your breath after a long and thrilling ride down.

Sled Heads: Vermont Companies That Can Help You Slide Local

There's more to sledding in Vermont than just mountainous terrain and reliable snow. This state is also home to companies that make downhill sleds and toboggans that are a joy to ride and are built to last. So before purchasing one that was mass-produced in an overseas tropical climate, check out these local options that will keep your greenbacks in the Green Mountain State.

Mad River Rocket, Warren: When Warren architect Dave Sellers invented his unconventional sled in 1987, he fulfilled his goal of building one that was safer and more maneuverable than a traditional sled or toboggan, for sliding down Prickly Mountain's backcountry slopes without crashing into trees. He never imagined that one day, his Mad River Rocket, as it's called, would become a cult classic among young sliders who use it for flying off cliffs and performing freestyle tricks such as backflips, rail slides and barrel rolls.

The Mad River Rocket is short, lightweight and made from durable polyethylene. Unlike typical sleds or toboggans that riders sit or lie on, the Rocket rider kneels on foam kneepads in a crouched position and steers by leaning left or right. Nylon straps fastened across the back of the legs enable the rider to carve sharp turns like a skier or snowboarder, leaving their hands free for balancing, maneuvering and braking. The rocket is available at many of Vermont's independently owned outdoor gear shops. Learn more at madriverrocket.com.

Norton's Vermont Toboggans, West Fairlee: Most of the time, flooring contractor Glen Norton wants his pieces of wood to be as straight as possible. But when the winter months approach, his work takes a different turn — deliberately bent into the shape of a traditional wood toboggan.

Norton is founder and owner of Norton's Vermont Toboggans, which builds handcrafted and customized toboggan sleds for adults and children. The idea began in 2007 when Norton, a Randolph native, was in a hardware store with his father, Gary, and the two spotted a four-foot toboggan for sale for $300. As Norton recalled, it was cheaply made, with thin wooden rails that were held together with staples. He realized that if he could figure out how to bend the wood properly, he and his dad could build one far better.

"That was a real process because, back then, there wasn't anything on the internet about how to build a toboggan," he recalled. But after countless hours of trial and error, Norton built a contraption that, he says, "came to me in a dream." He used steam to bend the nose of the wooden rails so they still fit together properly.

Norton starts getting orders in November and builds them in his shop in West Fairlee. Though most customers are locals looking to ride with their families, he's also built racing toboggans for the U.S. National Toboggan Championships.

All the wood used in Norton's toboggans — primarily ash, oak and cherry — is locally sourced. He also makes kids' sleds and gets calls every year from people asking him to repair old wooden sleds or toboggans they used when they were kids. Learn more at vttoboggans.com.