It's a Big Weekend for Film in Vermont: The Vermont Movie, the ITV Fest and More | Arts News | Seven Days | Vermont's Independent Voice

It's a Big Weekend for Film in Vermont: The Vermont Movie, the ITV Fest and More 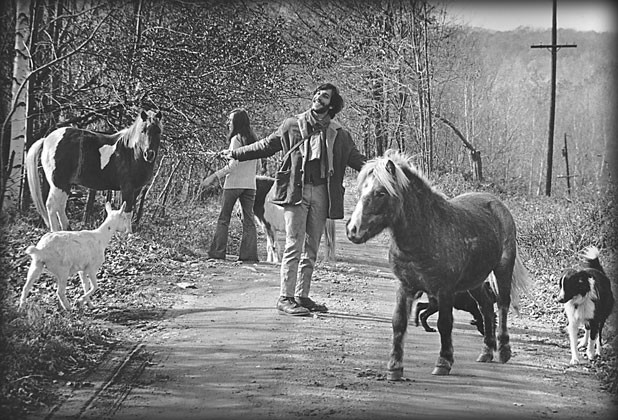 Is this a great time for film and filmmakers in Vermont, or not so much? On the exhibition end, the state’s smaller theaters have struggled to fund their mandatory transitions to digital projection. On the production end, Hollywood film crews and movie stars don’t descend on a state that lacks a production tax credit. (Don’t look for Richard Phillips’ hometown of Underhill in the upcoming Captain Phillips; the film was shot in Massachusetts.)

While Vermont’s landscapes may not star in blockbusters, locals are taking advantage of new digital tools to showcase their state — warts and all — on film. A few cases in point: This weekend brings the long-awaited premiere of a nine-hour opus called Freedom & Unity: The Vermont Movie, featuring the work of 48 mostly local documentarians. Last summer, A Band Called Death, the music doc from Burlington’s Mark Covino and Jeff Howlett, received SXSW exposure and limited theatrical distribution — increasingly rare for an indie.

In July, Orion magazine touted Northern Borders director Jay Craven as the leading exemplar of a nascent “place-based cinema” movement. Craven has finished touring his latest around the state, but this weekend, his wife and partner in Kingdom County Productions, Bess O’Brien, will premiere The Hungry Heart, her new doc about prescription-drug abuse in Vermont. In October, Burlington’s Vermont International Film Festival will showcase yet more local work.

Finally, again this weekend, Vermont will host the entertainment industry — or pieces of that increasingly fragmented and virtual entity, anyway. In Dover and Wilmington, locals can catch an international roster of short films and panels featuring industry innovators at the annual Independent Television and Film (ITV) Festival, a recent arrival from Los Angeles. Bringing ITV to Vermont was the work of West Dover businessman Philip Gilpin Jr., a friend of fest founders A.J. and Jenny Tesler.

Lars Hasselblad Torres, director of the state’s Office of the Creative Economy (which absorbed the Vermont Film Commission), says ITV is “putting Vermont on the regional map for filmmakers.” Unlike other local film festivals, this one is “industry facing as much as it is audience facing,” Torres explains. Meaning that, like the larger SXSW or Toronto fests, ITV offers “an opportunity for distributors to get a first look at new works and potentially pick them up.”

Founded in 2006 as a venue for indie television creators to display their work, ITV greeted the advent of YouTube by welcoming professional-quality web video. Today, its selections reflect the progressive merging of TV, online content and film.

One of the fest’s five panel discussions bears the catchy name “The Great Merging: Teleweb and Weblevision,” and poses the question, “Does anyone really know where the merging of web and TV is headed?” Among those answering it will be New York freelance producer Dana Kuznetzkoff (“Smash”) and fest founder A.J. Tesler, who’s now head of production at Jash.com, a comedy web channel showcasing Sarah Silverman and others. Other panels include “Being Funny to Pay the Bills,” with standup comedian Will Noonan, and an acting panel featuring Dylan Bruno, a familiar face from TV procedurals.

There’s a lot to ITV — music and comedy shows, vendors, art, even a car show. But it’s still a film festival, as evidenced by the 58 official comedy, drama and documentary selections to be screened over the weekend. They include works by Robert Fritz of Brattleboro, Martin Kasindorf of Wilmington and Tim Lawrence of Townshend. But the only northern Vermonter represented is Matt Day of Burlington — a young filmmaker who’s been attracting notice in and outside Vermont.

Day’s contribution to ITV, the documentary “Shape of Things to Come,” won the James Goldstone Award at last October’s VTIFF and the special jury prize at California’s Napa Valley Film Festival and has appeared on Pitchfork.tv. Profiling local musician Nick Zammuto, it’s one of a series of music videos and artist portraits that Day began creating in 2011 with equipment on loan from Vermont Community Access Media. VCAM’s Bill Simmon recently profiled Day in his “VT Makers” series.

Torres, who referred Day to ITV’s organizers, points to the fest and a recent Stowe scriptwriting workshop as evidence that “we can start building a real ecosystem here that can foster more of that independent storytelling … The sun might be rising a little bit for independent filmmaking in Vermont.”

It took seven years and 25 filmmaking teams to produce Freedom & Unity: The Vermont Movie. Nine hours long, the result isn’t a “movie” so much as a documentary portrait of Vermont from the Abenaki to same-sex marriage. Its creators call it, “the first ever documentary series about the many voices, cultural and political traditions that give the Green Mountain State its egalitarian ideals and bold, iconoclastic spirit.”

The collaborative project is the brainchild of Norwich filmmaker Nora Jacobson, who gave herself the mammoth task of editing the footage into something that would be “not only a Vermont story, but a universal story as well,” she writes in a director’s statement. Funding came from a raft of state and private organizations, as well as from a successful $55,000 crowdfunding campaign.

The whole process started in 2006, when Jacobson identified five characteristically Vermont “themes” and prepared a 22-page list of events and people that illustrated them. She gave it to 12 filmmakers.

By the end, 48 had contributed. “People started to hear about the project, or we heard about certain filmmakers,” Jacobson says in a phone interview. “People wanted to be involved, and we said, ‘Why not?’”

At the same time, she says, “as the project evolved, it became clear to me that some pieces were missing. No one wanted to do the eugenics story.” So Jacobson covered that dark chapter in Vermont history herself. Young Burlington documentarian Sam Mayfield took on the topic of contemporary off-the-gridders.

“Everyone got paid a little bit” for their labor on the project, Jacobson says, including the musicians. “We wanted to show respect to all the artists involved.”

The original plan to finish The Vermont Movie in time for the 2009 Lake Champlain quadricentennial turned out to be optimistic. In 2010, Jacobson began editing full time, seeking organic connections among the pieces. “In order to make a cohesive whole out of it, one person had to edit it,” she explains. “I didn’t want all of these pieces to just be strung together.”

Did Jacobson uncover any surprising facets of Vermont history? She was most struck by “the story about race in Vermont” before the Civil War, she says. “Even though there was racism in some of these communities, the constitution and the legislature really protected [African American settlers].”

How do you screen a nine-hour “movie”? Jacobson and co. are doing it with a “barnstorming tour” in two phases: Screenings of part one in large venues, with gala receptions, will be followed by smaller-scale showings of parts two through six. After a premiere in Barre, The Vermont Movie will touch down in Burlington and 12 other towns. Schoolkids have already experienced the series through a “classroom-kit DVD” that Jacobson’s team sent to Vermont schools in 2011. She’d like to see The Vermont Movie on a college tour next, and on Vermont Public Television.

But mainly, Jacobson says, “It will be really wonderful to start showing it.”

The concept of The Vermont Movie recalls Ken Burns’ acclaimed, in-depth historical series for PBS. As it happens, Burns himself will be in Vermont on October 19 for the grand reopening of Brattleboro’s renovated Latchis Theatre. He’ll preview an episode of his latest work, “The Roosevelts: An Intimate History,” to air in 2014, with proceeds benefiting the elegant art-deco theater’s ongoing renovation campaign.

This year’s Vermont International Film Festival will kick off on October 11 with The Crash Reel. Lucy Walker’s acclaimed documentary paints a portrait of Vermont-born snowboarder Kevin Pearce as he weathers a traumatic brain injury. Pearce will be in attendance at the special screening, which benefits the Special Olympics.

After that, VTIFF will screen a number of well-received films that haven’t (as of this writing) reached local theaters, including Act of Killing, The End of Time, Escape From Tomorrow, Danish thriller A Hijacking, Neil Jordan’s vampire flick Byzantium and Laurence Anyways, the latest lushly filmed love story from Québécois wunderkind Xavier Dolan.

Sam Mayfield’s protest documentary Wisconsin Rising will be among the many Vermont-made films screened. Watch this section for a full preview.

There’d be no Vermont filmmaking without lo-fi beginners eager to take a risk on an idea. And what better source of inspiration than Halloween? Starting this Wednesday, St. Albans’ Northwest Access TV will lure aspiring filmmakers to a series of clinics designed to help them craft their very own horror film for the channel’s first film fest, Northwest Nightmares.

After a kickoff party, adults and teens can try weekly classes on special effects, editing and more. The creepy results of their labors will compete for prizes on October 28 at the Welden Theatre.