It'll Do Darkroom Opens in Burlington 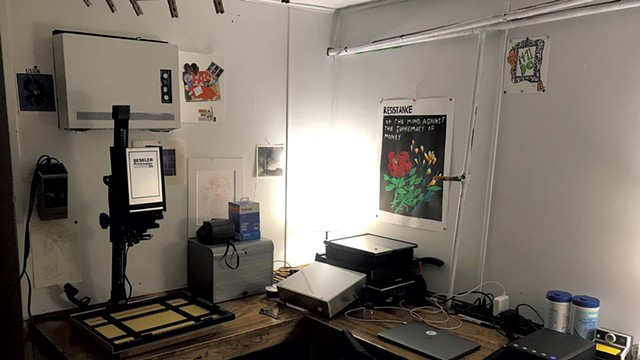 Mitchell O'Neill took his first darkroom class in 2017 at Burlington City Arts. He found the developing process "magical," he said. He'd been shooting film for a long time, but developing it added a new, hands-on layer to the experience.

"The biggest reason why I switched to shooting film is that I use so much technology every day," he said. Using an analog camera is an interesting contrast, he noted. "That lack of technology is really what I like about it."

O'Neill, who works for the tech company Share Yourself, wanted to use the BCA darkroom regularly, but the $60 monthly fee for nonmembers ($54 for members) wasn't feasible for him. Though Champlain College and the University of Vermont also have darkrooms, only students can use them — and even students may find the hours limiting.

So O'Neill came up with a plan that would actually cost him more in the short term but would provide a studio space accessible to more people.

Seven months and $4,000 later, he opened It'll Do Darkroom. His friends spent hours helping him set it up, and his collection of enlargers, timers and chemical trays found a rent-free home in the basement of a house in the Old North End owned by Stu McGowan, a local landlord and entrepreneur who is also O'Neill's boss.

Darkrooms don't require a lot of physical space, but avoiding rent has been a huge boon for O'Neill. "I've seen people use an enlarger in their own bathroom," he said. "You could do it with very little space, but luckily I'm fortunate enough to have a pretty big space."

O'Neill said the darkroom has had 27 bookings since the beginning of October. He provides the chemicals for free but asks that photographers bring their own paper. He spends nearly every evening in the darkroom, letting people in and out and providing tips on using the equipment — or learning from those with more experience.

O'Neill even lends out cameras and gives lessons to people who've never shot film. He's building the It'll Do Darkroom presence on Instagram by sharing the work of photographers who use the space.

"I really want the social media aspect to help jump-start some people's artistic goals," he said. Next, he wants to turn It'll Do Darkroom into a nonprofit and open other free-to-use art spaces in Burlington for mediums such as painting and printmaking.

The darkroom is named after his grandfather's boat, It'll Do, which O'Neill rode in as a child. "It was really this dingy old boat, but it got the job done," he said. His darkroom is similar: "I don't have the fanciest equipment, compared to every other darkroom in Burlington," but O'Neill says it'll do.