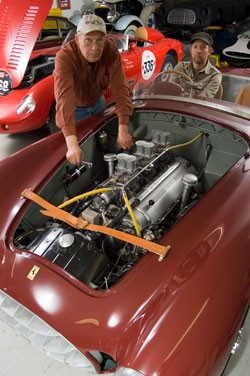 Pulling up to Restoration & Performance Motorcars in a dumpy-looking Pontiac Vibe is apt to give a person an inferiority complex, at least as a motorist. Perhaps that’s because locked inside this burgundy barn in Vergennes are Ferraris, Porsches, Mercedes Benzes and Alfa Romeos that individually are worth more than every car of every person you’ve ever known. Total.

One of those supercars is a 1951 Ferrari 212 Export. Her hand- hammered, merlot-colored body is sinuous and buxom. Her chrome hubs shine. Her custom-made dials gleam. Her grill and headlights are expressive, seeming to whisper, “I’m ready. Let’s go.”

But she wasn’t always ready to go. When RPM owner Peter Markowski acquired the car in late 2005, the Ferrari had seen better, more glamorous days. Though she used to burn up asphalt in Italy’s most prestigious road rallies, when Markowski found her she was buried in a pile of mouse skeletons and squirrel droppings in a dusty New Hampshire barn.

Now, after nearly four years of painstaking research and restoration, Markowski and the car’s owner, Pennsylvania casino magnate Peter Carlino, are ready to return the 212 to the race circuit. In May, Markowski, 62, will accompany Carlino to the car’s homeland to participate in the historic Mille Miglia, a four-day, 1000-mile road rally that travels through Bologna, Rome, Florence and Modena before ending in Brescia at the foot of the Italian Alps.

Markowski’s business, which he runs with his 32-year-old son Stephan, blends into its rural surroundings. A passerby would never know that, inside the clapboard barns, a crew of auto mechanics and restorers are busy bringing vintage cars back to life.

It’s probably just as well that RPM is camouflaged; the value of the shop’s finished projects is nearly incalculable. To get an idea how much the restored cars are worth, one need only look at what Markowski was offered for the mangled 212 shortly after it was rescued from that old barn. Potential buyers at a car show in Florida were willing to pony up more than $1 million for the vehicle, Stephan says.

Since he was a boy, Peter Markowski has had a fascination with cars, particularly European racing machines. While his contemporaries were begging their parents to borrow the family Imperial or Galaxie, Markowski was buying his first Ferrari, a 1950 340 America. He bought that car for $500 and spent years restoring it, then sold it in the early 1990s. Markowski’s passion for restoration quickly gained the attention of vintage- car buffs. About 25 years ago, he ditched his sales job and started working on cars full-time.

When Markowski first saw the 212 in that New Hampshire barn in 1966, he fell in love with it, he says. But the owner, Stan Hallinan, wasn’t interested in selling. He said he would eventually get to the restoration himself. It took Markowski 39 years to persuade the eccentric hermit to let him restore the car and sell it. Hallinan had faith that Markowski would do right by the vehicle, which was only the 86th Ferrari built by the legendary Italian carmaker.

But the 212 was in bad shape. Back when the car was built, Ferraris were used as rough-and-tumble racers, their bodies completely disposable. What makes a Ferrari a Ferrari is the chassis and the engine, not the curvaceous outer shell. Over the course of its life, the 212 had four bodies, some of which are featured in the book Red Arrows: Ferrari Cars at the Mille Miglia, by Giannino Marzotta. One of those bodies was a frumpy-looking station wagon.

When Markowski acquired the car, her body was stripped of all its paint except the iconic Ferrari prancing-horse logo. The dash was ill-fitting, as was the aluminum body, which still bore burn marks from the car’s last race. Sexy it was not.

To restore the 212 to her former glory, Markowski needed to fit her with a whole new body. So he hired the best — his older son, Eben, a self-taught metal artist.

The 34-year-old’s oeuvre consists mainly of life-sized copper animal sculptures, including a cartoonish giraffe, a bas-relief black rhino, a grazing horse and a swimming sturgeon. While his studio is right next door to the RPM garage, Eben generally has nothing to do with the work that goes on over there. “Admittedly, I don’t even like cars,” he says.

But when his father asked him to craft a new aluminum shell, Eben couldn’t say no. Despite having pitched in to help the elder Markowski mend sections of vintage cars, he had never re-created a complete body before. The challenge appealed to him. Plus, Eben reasons, Ferraris are “rolling pieces of artwork.”

The first step in the restoration process was to take the car down to its rolling chassis. To some, junking the car’s body might seem like sacrilege. But it had to be done. “People would say it’s such a shame that you’re cutting away this history,” Eben says. “But the workmanship was poor.”

By that, Eben means bodies were thrown onto these racing cars in slap-dash fashion so they would be ready for the next race. Luckily for the folks at RPM, all the parts that make the car a Ferrari, including its V12 engine, are intact.

In crafting the body, Eben had very few images of the car in its prime on which to draw — just a handful of grainy photographs of the early bodies. Based on those, he carefully shaped the aluminum with wooden forms and a variety of hammers and mallets. “I ended up having to do it completely old school,” Eben says.

A year and a half and $200,000 worth of body work later, a precious racing machine began to emerge. But before the 212 restoration could be called a Ferrari, says Eben, it needed to be evaluated by a certified Ferrari historian. Marcel Massini, a Swiss Ferrari expert, visited RPM last year to assess the work. The Markowskis collectively held their breath as Massini picked over every detail. “I felt like I was defending a thesis,” Eben says.

The metal artist worried that he hadn’t shaped the body perfectly, but that was actually a plus in Massini’s view. Original Ferraris were made by hand, and a certain amount of asymmetry was expected. It’s what gave the machines character, Eben says. Massini gave the car his seal of approval.

Though the Markowskis resurrected the 212, they can’t take all the credit for the work, says Stephan. Vermont craftspeople were employed to paint the car, letter the dials, tool the leather and stitch the seats. Three different people worked to forge one lug. The gauges alone required nearly a dozen subcontractors.

All that attention to detail makes the 212 a pricey, albeit pretty, piece of machinery. The Markowskis are reluctant to put a price tag on the Ferrari because, for people who buy and sell these cars, the dollar value is not as important as the vehicle’s rarity. Typically, Eben says, cars like the 212 are traded for others of the same ilk. That said, the car is “hideously valuable,” Stephan says.

Eben concedes he feels conflicted. As he walks through the rows of pristine, restored Packards, Austin Healeys and Ferraris in RPM’s basement, he says it’s sometimes hard to do this kind of seemingly frivolous work after he reads about the crisis in Haiti or the conflict in Afghanistan. But he also knows that, were it not for patrons willing to spend the money, there would be a lot of out-of-work car restorers — and artists.

As an artist, Eben sees his efforts as an homage to the Italian craftsmen of Maranello who hand-hammered every detail on the original car. Moreover, for car collectors and Ferrari enthusiasts, the 212 has great historical significance: It typifies the industrious Italian car-making aesthetic of the era.

“In their time, they were exceedingly advanced,” Peter Markowski says. “Ferrari wasn’t the most sophisticated, but they were tough.”