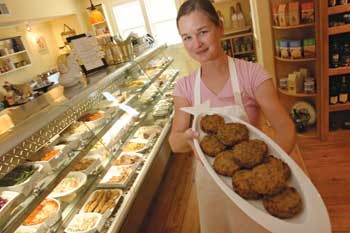 It's got wealth. It's got water. It's got matching Colonials and a quaint, old-timey look, despite being located on a bustling thoroughfare. Maybe Shelburne isn't the East Hampton of Vermont - yet. But a group of gifted chefs and artisans are making tourists see it less as a speed bump on Route 7 and more as a destination.

Outsiders who stop rather than just slowing down will find that Shelburne doesn't just look like an old New England village. It has two butchers, an artisan baker and probably more than one candlestick maker. It also boasts a winery, a "cheddary" and a sizeable working farm. The town also offers at least four places to stock up on fine wine and cheese, one being a locally owned supermarket. Right across the village green from the shopping center, a cozy coffee shop sells baked goods and thoughtfully brewed fair-trade espresso. From there it's a quick walk to several good places to sit down for a meal.

Shelburne wasn't always a culinary hot spot. For a long time, its mainstay was simple American and a smattering of ethnic restaurants with quick, tasty food. Of course, there have always been a few outstanding eateries. The restaurant at the Inn at Shelburne Farms, which just celebrated its 20th anniversary, has long offered contemporary cuisine with a Vermont twist, plus the most stunning lake view in town. Since 1988, award-winning chef Patrick Grangien of Café Shelburne has been serving up artfully prepared versions of French classics such as plump escargots and coquilles St. Jacques.

Over the past three years, though, the dining scene in Shelburne has exploded. Several local business owners attribute the town's gourmet growth to the 2005 renovation of the Shelburne Inn, which had become shabby over the previous decade. The classic building, now wearing a fresh coat of pale-yellow paint, houses an independent bookstore and toy store as well as The Bearded Frog, an upscale-casual bar and grill owned by Chef Michel Mahe, also of Black Sheep Bistro.

"The change has really revitalized the village and brought people into the village," posits Shelburne Supermarket co-owner Steven Clayton. And with the visitors have come new enterprises, including Bistro Sauce, Village Wine and Coffee, Amandine on the Village Green (see sidebar) and the Shelburne Meat Market. Plus, last year the town started its own farmers' market, on Saturdays from 9 a.m. to 1 p.m. On Tuesdays and Thursdays, produce from the Shelburne Farms "market garden" is available at the Welcome Center on the estate's grounds.

Shelburne's transformation might invite comparisons with Barre's. But while the Granite City owes its recent gastronomic growth to its ability to offer less expensive housing and business rentals, Shelburne isn't exactly a cheap alternative to Burlington - or to anything.

What the town lacks in affordability it makes up for in location. The 7000-person settlement borders Lake Champlain, which makes it a prime spot for affluent homebuyers - the median household income far exceeds the Vermont average. But it also straddles heavily traveled Route 7, which provides a daily injection of fresh faces. "We're handicapped by Route 7. It's a double-edged sword," suggests Kevin Clayton of Village Wine and Coffee. That's because 16,000 to 20,000 people pass through downtown each day, making it damned difficult to cross the street.

One business that's making the best of the busy environs is the Shelburne Meat Market in the Shelburne Bay Plaza. If you think of butcher shops as places with sawdust on the floor and toughs in bloody aprons, think again. Here, patrons will find stainless steel and glass décor and a friendly, family vibe. And the floors are sawdust-free. "I don't think Vermont health code allows it," muses owner Kim Ready.

Ready, 50, is a Burlington resident who had worked in retail before taking time off to raise her sons. Now she presides over the carne as well as a slew of specialty products, such as pastries made by Cloud 9 Caterers, Vermont salsas and an array of local cheeses. Hankering after a bacon, lettuce and tomato? You can get the smoky stuff and the fixins, too. The "B" comes from Vermont Smoke & Cure. The "L" and the "T" are fresh from Mazza's.

Ready and her staffers, who include her sons and a nephew, also make their own hot and sweet sausages and marinades. Their best-seller, the "house" marinade, is a combo of "olive oil and a beautiful blend of spices," she says. Other saucy options? Molasses-based barbecue, lemon pepper and Key West-style marinade with lime juice, to name a few.

But the strip-mall locale hasn't cornered the market on fresh sausages and dressings. The Shelburne Supermarket is into DIY, too, and meat manager Jim Blais isn't stressed about the competition. "We've been in business long enough that I don't think it [the Meat Market] will impact us," he asserts. At the same time, Blais acknowledges the other game in town. One difference between the two: Blais carries beef from LaPlatte River Farm; Ready gets the dry-aged version from Wood Creek Farm.

The Supermarket's farm-fresh produce and high-quality meats are helping Chefs Bill Allen (formerly of the Bobcat Café) and Bob Touchette (co-owner of Verde in Stratton) spice things up behind the popular prepared-foods counter. The two have been on staff for just over two months. In Allen's view, not many grocery stores can boast having honest-to-goodness chefs to "bring restaurant quality into the supermarket."

Comparisons with crunchy natural-foods markets are inevitable, but the Shelburne Supermarket's vibe is distinct. On a recent visit, the folks behind the cash registers looked like old-time Vermonters - no dreadlocks or unusual piercings in evidence. The shelves stock all the glowing orange, cheese-flavored snacks and gloppy canned soups you might want. But you can also find a nice bottle of Chardonnay and a selection of colorful eggplants to go with it.

In the prepped-foods section, the chef-driven team is working to shift the focus from "straight-up American buffet foods" to health-conscious global cuisine, while still catering to a wide customer base. That's why tilapia puttanesca and crab-stuffed Dover sole sit alongside classic tuna 'n' mayo and other picnic standards. On a recent day, the hot-bar offerings included a veggie empanada and Jamaican-style chicken. On the side: mashed sweet potatoes with raisins and coconut, spiced rice and green zebra tomatoes topped with melted cheese.

For those who want a sit-down dining experience, Bistro Sauce is a short walk from pretty much everything in Shelburne Village. But just because it's got "Bistro" in its name, and Chef Bill Iliff used to work down the street at Café Shelburne, doesn't mean the food is Frenchified. Why the misleading moniker? "We just wanted to call it 'Sauce,'" explains co-owner Emily Iliff, a former NECI instructor. But legally, you can't copyright something so generic. And there's already a "café" in town. "Restaurant Sauce?" Uh-uh. Besides, explains Emily, the word "bistro" connotes a cozy communal atmosphere, and that Sauce has.

So if the cuisine isn't Euro, what is it? Local comfort food. The Illiffs try to find the best seasonal offerings to serve their patrons. The summer dinner menu includes Champlain Valley Rabbitry rabbit accompanied by garlic scape gnocchi, and Misty Knoll chicken with goat cheese ravioli in a white-wine mushroom sauce. While CVR and Misty Knoll are de rigueur in trendy restos these days, the folks at Sauce get a bit wilder than average. A recent pasta special made use of found edibles, such as milkweed pods, angelica tubes and bracken ferns, gathered by freelance Vermont foragers Nova Kim and Les Hook.

At The Bearded Frog, the food is a little fancier and pricier than at Sauce, where the entrées max out at $19. At "the Frog," the dinners are priced at $17, $20 and $23 - still a great value compared with certain Burlington joints. In the mid-range, there is seared duck breast and red-wine-braised duck leg with rosemary potato waffles and haricots vert. At the upper end, there's a rack of lamb with vegetable ragout, garlic mashed potatoes and mint compound butter.

Emily Iliff is proud of Sauce's steady lunch business, and she believes that her restaurant, the Frog and Café Shelburne complement one another. Village Wine and Coffee gets a steady flow of coffee drinkers and oenophiles - even from Burlington. And, given the number of people Chef Allen sees tromping through the Shelburne Supermarket each day - sometimes several times in one day - he's convinced locals are loving their town's forward strides.

Allen sees Shelburne as an exception to the usual pattern, in which hip growers and chefs catch on to the latest trends and try to convince the townies to try them. Here, he says, "The restaurants used to not match the wealth of the community . . . We're catching up with them, rather than the other way around."

The influx of excellent ingredients has certainly encouraged both businesses and patrons to try something new. Chef Grangien of Café Shelburne remembers when such raw materials were unavailable in the metropolis - let alone on the shores of Lake Champlain. "When I arrived in New York City, you couldn't find any [high-quality] bread or cheese," he explains. During a recent sampling of 10 American artisan cheeses, Grangien tasted how times had changed. "I couldn't say that one was bad. Some were fantastic," he reflected. And some of those excellent products come from Chittenden County and environs.

True, Shelburne isn't Paris - where, points out Grangien, people will wait in long lines each morning to get their hands on crisp, fresh-baked baguettes. He still has trouble persuading patrons to try a selection of after-dinner cheeses instead of his homemade caramel ice cream or lemon mousse with fresh fruit and raspberry sauce. "Every time I've tried to put cheese on the menu, I've ended up eating the cheeses," the chef says, shrugging. Ah, the sacrifices one makes for one's art.

Maybe, like most of America, Shelburne still has that déclassé sweet tooth. Chances are, its restos will never beat East Hampton's for celebrity spotting. But for a little suburb on a major thoroughfare, this burg is looking highly appetizing.