'It Chapter Two' Takes Us on a Long, Strange Thrill Ride 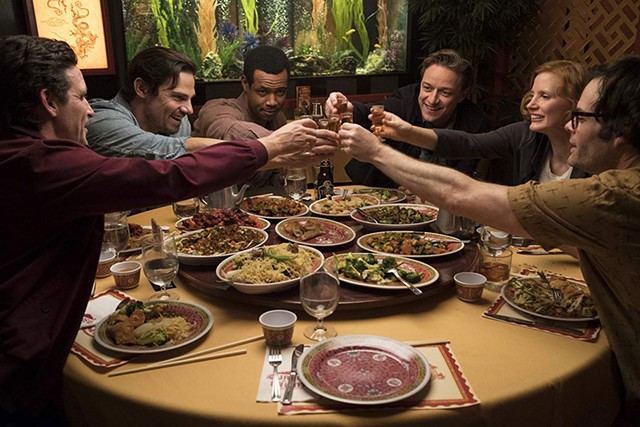 There's a reason many horror fans don't love digital effects: Fear needs grounding. When a cheerful clown opens his mouth to reveal a second set of jaws that put the Alien xenomorph to shame — the signature effect of both It movies — that's pretty damn scary. But when that clown monster continues to transform, filling the screen with trippy illusions, he stops being scary and becomes a Grand Guignol cartoon.

Don't get me wrong. It was an entertaining horror adventure in the "Stranger Things" vein, and It Chapter Two is still entertaining — though, at nearly three hours, it sometimes wears out its welcome. Both work as thrill rides. But, except for the occasional scenes in which cosmic-evil-disguised-as-clown Pennywise (Bill Skårsgard) lures child victims with a seductive purr in his voice, they aren't very scary.

Stephen King's It is a doorstop of a novel that alternates between past and present narratives. Pennywise preys on the small town of Derry every 27 years; having first battled him on the cusp of adolescence, the members of the so-called "Losers Club" must face him again on the cusp of midlife. Summoned by Mike (Isaiah Mustafa), the only one who stayed in Derry, they return home to defeat a monster they now scarcely believe exists.

And what a bunch of non-losers they are: Bill (James McAvoy) is a best-selling author; Eddie (James Ransone) drives a tank of a car; Richie (Bill Hader) is a famous funnyman; Ben (Jay Ryan) is a prominent architect; Beverly (Jessica Chastain) has her own clothing line. But they still have plenty of secret fears for Pennywise to exploit.

Director Andy Muschietti and screenwriter Gary Dauberman chopped the giant, time-hopping novel into two films: then and now. While It told a self-contained story, however, It Chapter Two is stuffed with flashbacks to the characters' tween lives. At best, these add depth and pathos; at worst, they feel like deleted scenes from the first movie.

Until the climactic battle rolls around, this structure dictates that Chapter Two is essentially a series of set pieces in which each protagonist faces down the demons of his or her past. Some of these are brilliant; others drag.

Hader and Ransone emerge as the MVPs of the adult cast, supplying likable comic relief. Certain other Losers are woefully underdeveloped. Sophia Lillis' bad-girl bravado as the young Bev was a highlight of It, yet the adult Bev is more of a nonentity, a cringing damsel tasked with choosing between two love interests. It's a waste of Chastain's cinematic charisma.

The villain's penchant for transformation dovetails with the filmmakers' penchant for absurdity to make It Chapter Two a strange film at times. It opens with a vicious hate crime and stages a horrifying child murder, yet it also features a ghoul who vomits both slime and the chorus of Juice Newton's "Angel of the Morning" on Eddie. Such moments suggest a Tim Burton movie with edge (i.e., old-school Burton); when Pennywise gets his circus-illusionist mojo on, he could be Beetlejuice's nastier cousin.

"It's not real," the Losers tell themselves whenever Pennywise attacks them with surreal apparitions. It doesn't feel real, either, and that's why the bulk of the film is less horror than horror-themed carnival ride. Fans of the book praise King's powerful evocations of everyday evil and childhood trauma. This version has all the bells and whistles and smoke and mirrors, but it still feels more like a night at the (creepy) circus than a season in hell.