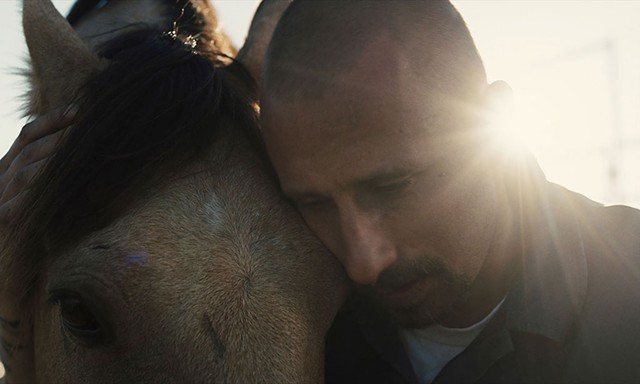 This week, after watching four pandemic movies, I flailed around in search of something less horrifying to review. As regular readers know, I'm not a big fan of "comfy" or heartwarming movies. But stories about taciturn, closed-off people bonding with animals get me in the feels. So when I spotted last year's The Mustang on Cinemax, which has a handy one-week free trial, I gave it a try.

This first feature from actor-director Laure de Clermont-Tonnerre, executive produced by Robert Redford, could easily double as a lyrically shot ad for wild horse inmate programs in the American Southwest. The film opens by informing us that, as the New York Times phrased it on March 22, "A Mustang Crisis Looms in the West." Public lands are overpopulated with wild horses, and the Bureau of Land Management is out of palatable solutions. A small number of these mustangs, the movie tells us, are sent to prisons to be domesticated and trained by inmates, then sold at auction.

Matthias Schoenaerts plays Roman, who's been incarcerated for 12 years, many of them in solitary. The air around him is dense with misery; for his first 10 minutes or so on-screen, the only line he speaks is, "I'm not good with people." When his adult daughter (Gideon Adlon) visits him, so much time has elapsed since they last met that he doesn't recognize her.

Assigned to shovel horse dung, Roman hears a mustang banging its hooves frantically against its carrier. The animal's desperation speaks to him, and soon he's training "Marquis," learning from the horse how to read social cues, earn trust and draw boundaries without throwing punches.

The Mustang is essentially a film about rehabilitation, but Clermont-Tonnerre couches the message in non-preachy terms, guiding her protagonist as gently and steadily toward redemption as he must learn to guide his horse. Belgian actor Schoenaerts (Bullhead) has a knack for conveying layers of anger and woundedness without theatrics. His powerful performance as a man in a haze of guilt and grief fills in the blank spaces in the screenplay.

Clermont-Tonnerre's camera finds plenty of beauty in the desert setting, and the supporting cast offers a lively counterpoint to Roman's depression. Especially fun to watch are Jason Mitchell, as the gregarious fellow inmate who trains Roman, and Bruce Dern, as the acerbic rancher in charge of the program. Brimming over with sly humor, Dern seems to be having the time of his life; the performance is a fine companion to his darker turn as rancher George Spahn in Once Upon a Time ... in Hollywood.

There's a prison-intrigue subplot that feels a little half-assed and unnecessary; The Mustang isn't "Oz," nor does it need to be. The film's true villain is the lack of funding that threatens rehabilitation programs like the one depicted here. I won't lie: The film's ending is more bittersweet than feel-good. But Roman is left with a germ of hope that feels earned.

If you go looking for The Mustang, be aware that there's another excellent movie called Mustang (2015, on Netflix) about five free-spirited Turkish sisters who run afoul of the patriarchy. Named for a symbol of the untamed frontier, both of these movies are actually about physical confinement — and about the strength that comes from bonding with others.

The Mustang's most powerful images are those of the wordless physical contact between Roman and Marquis — reminders that, even under conditions of voluntary or involuntary social distancing, people never lose the desire to connect.