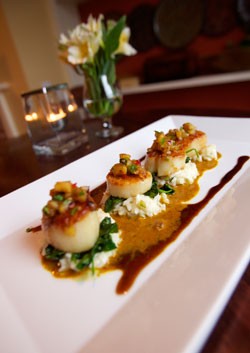 If you scan past the trompe l’oeil palm trees in the dining room of Woodstock’s Melaza Caribbean Bistro, you may notice a tiny detail: The tables lack salt and pepper shakers. And that’s as intentional as is the vivid décor. The chef, David Diaz, believes seasoning needs to take place in the kitchen, before dishes reach the table. “What we create is not spice, it’s flavor — such as adobo, garlic or sofrito,” he says of the simmered base of onions, peppers, garlic and herbs that underlies the Creole cuisine in his native Puerto Rico.

Last fall, Melaza joined the scant ranks of Vermont’s Caribbean eateries with dishes that draw from French, Portuguese, Spanish, African and indigenous Caribbean cuisines. That eclecticism is at play here on a daily basis — you can order ropa-vieja-style short ribs, black-bean ravioli or tuna served over soba noodles flavored with green tea.

Plantains are another key part of cocina criolla. In hotter climates, they’re dished up as commonly as we northerners cook potatoes. At Melaza, Diaz wields plantain — and cassava and yucca — with abandon, slicing and frying it, mashing it to serve with lobster tail, or posing it atop roasted pork shank so it seems to wave from the plate.

If Melaza fills a culinary gap in Vermont, it’s also a coming home of sorts in Diaz’s culinary life. As a teenager in Puerto Rico, he and his brother learned to cook alongside their father at his catering business and at El Pollito, the family restaurant in Bayamón. Eventually, the young Diaz moved across the water to Miami, and then to Baltimore. When his father died, he returned to Puerto Rico. His father and experience taught Diaz well: While he was chef at La Ragazza Restaurant in 1985, he won the Tenedor de Oro (Golden Fork), the island’s highest culinary honor.

Through acquaintances in Puerto Rico, Diaz learned of a culinary opening in Vermont. Though that job didn’t work out, Diaz nabbed another one at the Quechee Club, becoming executive chef there in 1995. He stayed for 15 years, tapping European culinary techniques and rolling out the dishes from his native Puerto Rico as occasional specials.

Along the way, Diaz befriended Quechee resident James Van Kirk, who had grown up in Puerto Rico, as well. Occasionally the pair would kick around ideas for a Caribbean eatery.

Diaz appears to recall his years at the Quechee Club with deep affection. But last summer, when he and Van Kirk saw that Sevi’s Pub & Grill on Central Street in Woodstock had closed, Melaza began to take shape.

First came a dramatic renovation. “What we wanted was to do it classic, to do it clean, to do it comfortable. The atmosphere had to be just right,” says Diaz, who had a clear vision of the place.

Melaza is far from the typical, brightly lit urban Caribbean restaurant, as well as a total change from the eateries that previously inhabited the space. Fine woodwork and modern tables fill the bar and main dining rooms, and long benches covered with cushions and pillows line both rooms. “Melaza” means molasses in Spanish, and those warm tones are in evidence; vintage shutters and vivid murals decorate the walls. Upon entering, visitors are enveloped in color and aroma, not to mention hearty greetings from Van Kirk, the maitre d’.

Wading through the menu is almost like wandering along a beach: Plantains, shellfish, rum-guava glaze, tamarind, cassava and yucca all make appearances. Diaz obtains many of these items from Black River Produce, and fresh fish from Boston’s MF Foley Fish. Americans have come a long way in their taste for cross-cultural ingredients since he arrived in the U.S. in the 1980s, Diaz says. “When I first came here, fusion food was mango salsa, mango this, mango that. We don’t do that on the island. We eat the mango right from the tree.”

Mangos do make at least one appearance at Melaza, on a creative cocktail menu based on Puerto Rican rum. I order one; the bartender takes to intense muddling and eventually pours a not-too-sweet version over a tangle of fresh mint. My companion’s coral-colored Melaza Mango & Pineapple Punch disappears in a few sips, in the dangerous way some tropical drinks do when you can’t taste the rum.

Van Kirk suggests the Caribbean tapas as a smooth ingress to the rest of the menu. They’re served on an evenly quartered white, square plate with a morsel in each corner: grilled churrasco chipotle steak on a skewer; an empanada filled with lobster; an arepa, or corn cake, stuffed with a pale-red chicken sofrito; and a cornmeal fritter filled with Monterey jack cheese and sun-dried tomato. If you’re as hungry as we are, it takes about three minutes to polish off all four. Nothing is overly spicy or as pungent as we expected — the lobster is understated, the grilled beef subtly seasoned. The chicken sofrito arepa stands out the most, slightly saline and tasting of creamy tomato and onions.

Diaz’s take on ceviche tostones — cubes of citrus-marinated ahi tuna blended with diced pepper and herbs, and then loaded on fried plantain chips — is drizzled with bright-green avocado crema. The dots of verde and fire-engine red are like a visual acid, making my mouth water before a single bite; the ceviche turns out to be velvety but without sharpness, its delicate flavor slightly overpowered by the plaintain.

After many years in Vermont, Diaz says his cooking style has developed a New England inflection. When American-style warm dinner rolls arrive on the table, for instance, they’re served alongside cilantro-specked oil. He’ll grill queso fresco on skewers, call it “farmer’s cheese lollipops” and serve it with guava-rum sauce. Yet small plates such as camarones al ajillo (grilled garlic shrimp) and a traditional Cubano (a pressed sandwich of roasted pork, ham, pickles, Swiss cheese and mustard) don’t stray far from tradition.

Diaz’s platos grandes (big plates) read like a glossary of unfamiliar but enticing seasonings and preparations, so choosing can be difficult. My companion spends a long while vacillating between costillas de res — beef short ribs braised in a Creole sauce with onions and peppers — and lechon asado vástago, a slow-roasted pork shank in a rum-guava glaze. I kick around the idea of ordering a lobster tail grilled and basted with adobo garlic butter, but instead go for a house favorite: scallops in a curry-coconut-lime sauce served on risotto and topped with pineapple chutney and tamarind glaze.

“People go crazy for the shank and the scallops,” says Diaz, almost lamenting as he plans to change to a summer menu soon. But these mainstays may need to stay.

Our waiter makes such a passionate case for the pork shank that we feel we’d be remiss not to order it. When the dish arrives, it almost looks like it belongs at a medieval feast: a double-fist-sized piece of flesh slathered in a glaze that has turned brick red under fire, bits of char clinging to its sides. We expect it will taste both red hot and sticky sweet on the tongue, but it is neither: The succulent meat itself is the main star, with only a faint sweetness and a hint of pepper.

The massive scallops must have ruled their pocket of the sea — they’re lined up like sentries on islands of creamy risotto, which itself is surrounded by a sea of brown curry sauce. As in other Melaza dishes, no single note leaps from the plate; rather, there’s a symphony of brininess from the scallops, unctuous cream from the risotto, and faint coconut and earth in the sauce.

We have few problems choosing dessert from among Caribbean chocolate volcano cake, mojito cake or Key lime pie. The caramel flan we finally order is chilled to extreme firmness, which slightly blunts its flavors.

Appearing again toward the end of the meal, Van Kirk confides that he and Diaz are considering a location near Burlington. “What do you think?” he asks, though we can’t tell if he’s being congenial or serious.

“Yes, why not?” we tell him. Glancing around at the older Saturday-night crowd here, we understand why Diaz might be restrained from dishing up powerhouse flavors.

“I want to see how far I can go, what the people around here like,” he says when I catch up with him a few days later. Up north, I think, Diaz might be able to let loose a bit. For now, the Caribbean authenticity he’s gently serving in Woodstock is a welcome addition to Vermont’s foodscape.