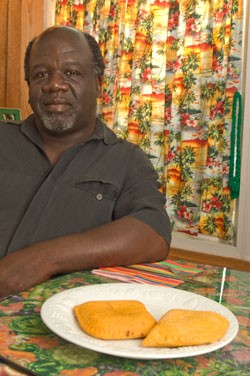 “Oh, dear me,” Patrick Brown says with a laugh, cradling his face in his hands. “People quite often tell me I should document my story. There are so many.”

There’s the story about how the Jamaican boy ended up in Vermont. And how he became a leader in the black community. And, of course, there’s the one about how Brown has kept his restaurant, Caribbean Buffet, going for 20 years in the changeable Old North End of Burlington.

Since 1990, Caribbean Buffet — or Caribbean Corner, as it was called before Brown added the steam table in the late ’90s — has been a meeting place and open food secret in Burlington. In its original incarnation, the restaurant was also a dance hall, with music spun by University of Vermont debate coach Alfred “Tuna” Snider. And it has been and still is, as Brown puts it, an unofficial “counseling center” for the community.

Caribbean Buffet is the rare example of a local island-style or soul-food restaurant with staying power. After quickly enumerating five such Burlington eateries that came and went since he opened his, from Glori Nori in the Vermont House to Southern Soul farther up North Winooski Avenue, Brown shakes his head. “The life of Caribbean restaurants around the country is very short lived,” he says. Today, Marsala Salsa in Waterbury, which also serves Mexican food, is the only other Caribbean eatery in Vermont.

Brown’s has stood the test of time thanks to his fierce survival instinct, endearing personality and, of course, delicious food. The owner holds a PhD in education and serves as an adjunct instructor for classes focusing on race and the Caribbean at UVM. When he’s not on campus, he’s holding court at the restaurant.

“Public belief is that I live in the back,” Brown says with a chuckle. On a block with a higher-than-average incidence of robberies, he notes, fostering that belief can be an asset: “I’m probably one of the only ones on the block that hasn’t been broken into.”

When asked his age, Brown covers his face and giggles coyly. “Oh, dear me! No!” he playfully shrieks before allowing that he is 57.

Brown left Jamaica to attend college at Concordia University in Montréal, where he earned his BA in marketing. Next, he headed to St. Michael’s College for his master’s, then to a university in St. Kitts for his doctorate. Brown has remained in the Burlington area ever since, though he says each year the return of cold weather prompts him to threaten it will be his last in Vermont.

“People always wonder why I stand in front of the window,” Brown says of his wintertime habit of looming at his storefront. “Little do they know, I’m actually standing in front of the heater.”

While he put himself through school, Brown worked as a cook and dishwasher. Though he says all Jamaicans have a passion for food, his certainly grew as he spent time in the industry.

When he opened Caribbean Corner, Brown prepared a small core of standard Jamaican recipes. Twenty years later, the menu hasn’t changed much. The stars are crisp jerk chicken speckled with mouth-numbing Scotch bonnet peppers and dark, rich chicken curry. On weekends, Brown shares a package of goat meat from Winding Brook Farm with the owners of Shalimar of India; he makes it into goat curry.

It’s also on weekends when Brown turns on his steam table, from which diners can choose and consume offerings — for $15 — until they burst. He prides himself on providing a filling meal, with no special accommodations, to vegetarians and vegans. They can graze on callaloo — braised leafy greens, lightly seasoned rice and beans, sweet candied carrots, and seasonal vegetables. Brown makes his Jamaican patty appetizers by stuffing the yellow pie crust with either curry-tinged beef or veggies.

Brown’s written menu is small, but he will make guests anything they desire — with a few days’ notice. He recently turned down a request from a fellow professor to make a conch feast for his entire class just one day in advance, he says. With more lead time, he can offer lovingly prepared oxtail, Caribbean fruitcake (a plum-pudding spinoff, often called “black cake” for its intense color), or saltfish and ackee.

The last dish has special cachet. Ackee is a fruit related to the lychee and sometimes known as “vegetable brain.” Like the poisonous blowfish, it has just one edible part — and only when it has been harvested at the right time and properly cleaned and boiled. Canned ackee was illegal in the United States until 2005, and fresh ackee still is. Brown says he is profiled as Caribbean and routinely searched for it whenever he returns to the States from Canada.

Back home in Jamaica, however, ackee is enjoyed as breakfast, along with cured, rehydrated fish and rice and beans. Brown says his cooked ackee resembles scrambled eggs in both appearance and taste.

Mark Akey, owner of Akes’ Place in Burlington, is a longtime fan of Caribbean Buffet. “It’s kind of like eating in [Patrick’s] own home, and the food’s great,” he says. Akey is particularly fond of Brown’s beef patties. “He’s hardworking, too,” Akey adds. He better be — Brown is Caribbean Buffet’s only employee.

Brown greets each customer at Caribbean Buffet with a glass of ginger beer, to which Jamaicans attribute curative properties. Then he selects some fruits and heads to the juicer. Brown says his favorite thing to prepare at his restaurant is fruit juice: “I get very creative with the drinks,” he notes. “Since it’s such a small operation, I do wonders with each of those fruit drinks.” They include anything from strawberry and banana to guava and passionfruit — whichever fruits look best at City Market, where Brown is on the board of directors.

During the summer, Brown picks up many of his fresh herbs and vegetables at the Burlington Farmers Market. He no longer has to travel to Hartford, Conn., for spices, as he did when his restaurant first opened. Now he heads down the street to Mawuhi African Market. Chicken comes from a frequent customer who happens to have a small farm.

Brown’s charm perhaps helps sustain his restaurant. His gilt-edged, pink-rose-patterned china was a gift from a customer when she left the state. The crystal in which he serves desserts such as pineapples in cinnamon cream has a similar story. The buffet table, modish lighting and booths were free, too.

What isn’t free, Brown manages to get on the cheap. He eschews Costco and traditional restaurant suppliers in favor of Big Lots in Essex and Williston’s Mr. G’s Liquidation Center. (At the latter wholesaler, ultra-fluffy toilet paper goes for 29 cents a roll, he confides, presenting one.) The cheerful, fruit-patterned juice glasses came from a dollar store, where Brown bought them one at a time. “Coming from the Caribbean, you make do with what you have,” he explains.

He helps others do the same. Brown has earned a Coveted Badge Award from the Burlington Police Department, a Community Impact Award from the United Way of Chittenden County, and even a certificate from the Daughters of the American Revolution. He’s the founder and executive director of the Greater Burlington Multicultural Resource Center. Last June, Brown was a prominent voice advocating for a mixed-race couple whose St. Albans wedding had been interrupted by the border patrol.

But he doesn’t just hobnob with the rich and famous. According to Brown, he’s often the first person his neighbors turn to when they’re in search of a job. In the space of a 90-minute interview, about a dozen neighbors and students stop in at Caribbean Buffet to chat. Some are from the Caribbean themselves.

According to Martha Maksym, director of community investments at United Way of Chittenden County, “Most of us have been touched by Patrick.” Maksym calls Brown no less than “a visionary,” adding, “He is someone who has been a champion for recognizing diversity and inclusion in this community. He’s a quiet hero.”

Popularity in the community has its downside: People often stop in to ask Brown for money, among other things. “You would find it so dramatic the things people ask,” says Brown. “I was standing at the door last week, and a gentleman who was new in town from Trinidad said, ‘You guys are from the islands; you must have some pot.’ Another young guy came in and asked if I had some cocaine. If that were the case, there would probably be a line out my door!”

All Brown can offer is a patient ear. He doesn’t have any jobs to offer, since Caribbean Buffet is a one-man operation. That’s why, on days when his classes run late, so does dinner. To address the problem, Brown plans to hold next semester’s labs right in the restaurant so he can teach, serve and cook.

Although Brown spends a lot of time at the restaurant, he serves dinner only — and acknowledges that many locals think this is not enough. “If I were open more, I would be burnt out,” he says. He hopes to put his business on a stable enough footing so he can hire others to help serve during the lunch hour. “I have my eyes set on bigger goals,” Brown says.

That includes someday opening a Caribbean food store where the area’s growing island community — including more than a few UVM students — can purchase all its favorite items.

Fans of Caribbean Buffet often suggest to Brown that he could expand his business if he moved it to Church Street. Brown disagrees. “Something like this,” he says, “you don’t need to have a prime location. If I were in Essex and had a Caribbean restaurant, people would find it.”