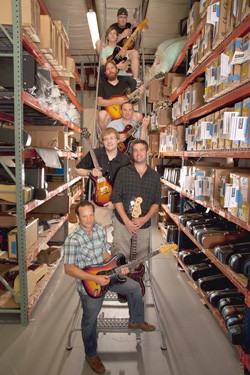 Ben Werlin and his brother, Brandon Werlin, were sitting on a rock in Yosemite National Park in 2010 when they decided to revolutionize how guitars were sold. Combining Ben’s business savvy and Brandon’s experience selling drum equipment, Rickenbacker guitars and the occasional Beanie Baby on eBay, they created Music Store Live, an online retailer that ships high-end axes from its South Burlington warehouse to customers around the globe.

Now in their second year in business, Ben, 31, and Brandon, 24, have since added a third partner, Jeff Santoro, and employ an impressive roster of local guitarists. Rough Francis’ Paul Comegno, a graduate of the Roberto-Venn School of Luthiery in Phoenix, Ariz., is the guitar tech. Bob Wagner, who recently hosted the star-studded Hug Your Farmer tribute to Levon Helm at Higher Ground, claims “the describer” as his MSL job title — he writes the descriptions for each instrument in the catalog. Zack duPont and Pat Melvin, both of the Zack duPont Band, help MSL with marketing and buying gear, respectively.

Buying guitars online can be a worrisome ordeal both for customers and companies such as MSL. As a reporter gapes at the 2700-square-foot MSL warehouse packed to the ceiling with cases of high-end Gibsons, G+Ls, Taylors and more, Comegno sits in an upstairs office filing a complaint with UPS, which delivered to MSL a smashed Martin from Colorado.

“We once got a ’68 SG from Puerto Rico,” Comegno recalls. “It was water damaged because the guy who sent it just put it in its case with plastic wrap.”

Regardless of risks, MSL is on the cutting edge of the music-store industry’s online evolution, emphasizing exemplary customer service via tech-y interactions.

After MSL purchases a guitar, Comegno draws upon his 10 years of guitar-tech experience to ensure the instrument plays its finest. He guts and cleans each guitar, substituting new parts when appropriate. He then polishes it up for MSL photographer Steve Lively.

“Steve spends about two hours with each guitar,” Ben Werlin says. Lively uses a high-resolution Canon camera and Photoshop to capture an expansive series of detailed images for the MSL website. Lively’s studio in the warehouse, crammed with gray umbrellas, black draperies and esoteric camera gadgetry, looks like a set from Antonioni’s 1966 film Blow-Up.

After the shoot, Wagner plays each guitar to gauge its “mood.”

“I think every guitar has some quality that will speak to different players,” he says. “I just find those qualities and try to highlight them in my descriptions.”

Wagner’s musical versatility enables him to noodle on a guitar in its characteristic style. “The guy playing D-tuned metal is very different from the guy playing Bill Frisell-ian folk jazz,” he explains. “If I get an ESP or a Jackson, I’m going to flip out and play crazy metal. If I get a Tele, I’ll play country shit.”

After capturing the vibe, Wagner writes a “player’s perspective” for the listing. He recently described a ’65 Fender Jaguar as “literally bursting with mojo.” In his descriptions, Wagner includes the history of each guitar and assesses everything from body condition to the engraved lettering on the tuners.

“I think we write some of the most thorough descriptions in the business,” Werlin says.

MSL’s aggressive customer-service campaign includes a personal introduction of each guitar to its potential buyer via Wagner shredding over Skype. Buyers have him plug in with their preferred settings to hear and see their potential purchase in action.

“Our goal is basically to do everything we can short of actually putting the guitar in people’s hands before they buy it,” Werlin says. “And they get to hear a rippin’ player play their guitar, which helps.”

He adds that YouTube demonstrations for each instrument are forthcoming in a few weeks.

Each MSL guitar is sold with the company’s signature Certified Used Guitar Guarantee, which promises compensation for any fault undetected in the tech check. MSL also stresses the importance of speaking with customers over the phone, to sustain the one-on-one attention music-store shoppers are used to.

“People are going to plunk down two to three thousand dollars on a guitar,” Werlin says. “They usually have some questions.”

Though MSL specializes in high-end vintage guitars, the company will also ship amps, basses, keyboards, effects pedals and any other musical accoutrements. The business began with just used guitars, but Werlin says roughly half of what he sells now is new.

“That will probably shift again when we bring the Guitar Center guy on,” he adds, referencing his newest hire: Brian Buonomo. GC’s main vintage guitar buyer on the East Coast, Buonomo is leaving his position at the Manhattan Guitar Center to join the MSL team.

Though several local music stores have recently closed, Werlin doesn’t expect the bricks-and-mortar guitar store to disappear completely. He cites Guitar Center, which is expected to move a franchise into the former Daddy’s Junky Music storefront in Williston, as in an upswing.

Customers can buy guitars in person from MSL, by appointment.

“People could have a field day here,” Werlin says as he looks at a rack in the MSL showroom that includes Jazzmasters, Les Pauls and SGs. He estimates his warehouse currently holds some 300 high-end guitars, none of which sits on a shelf for longer than 90 days. MSL sold 117 guitars in May, and Werlin expects that business to expand.

“Obviously, we have a ton of overhead,” he says. “In order for the business to work, we have to have a lot of guitars in here.”

MSL plans to give back to the community via an instrument-donation service, once finances allow the company to do so.

Other future endeavors include publishing a vintage guitar buyer’s guide and hosting a Mod of the Month series by Comegno. He recently modified, or “modded,” Werlin’s Fender Stratocaster with a tone knob to blend between a minihumbucker and a single-coil pickup. Werlin, who plays in local roots band the Move it Move it, says he wants MSL to become a resource for guitarists to learn more about their instruments.

“We’re going to start sending out handwritten thank-you notes to every customer,” he adds.

Autumn Furtak-Cole, the MSL employee who will write the notes, looks up from the camo-fatigued Les Paul he’s been working on. If MSL’s freshly cut deals with Fender, Gretsch, G+L, Guild, Larrivee, Nash and Orange are any indication, Furtak-Cole’s hand is in for a workout.