Isabel Pless, 'Too Big for the Playground, Too Small for the Big Leagues' | Album Review | Seven Days | Vermont's Independent Voice

Isabel Pless, 'Too Big for the Playground, Too Small for the Big Leagues' 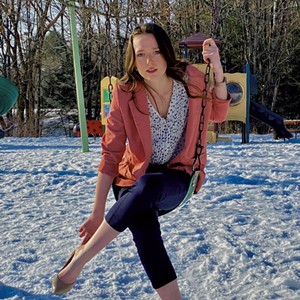 I often think back to a memory from my youth, a strange moment in time when I watched "60 Minutes" with my parents as a teen. Kurt Cobain had recently committed suicide, and there was footage everywhere of people, mostly my age, mourning. As if called on by some predatory instinct to be a curmudgeonly dick, Andy Rooney appeared on the TV, bloviating about how pathetic these young people's tears were after losing an idol. That's when I first saw the danger of losing perspective through age.

It's a memory I call on whenever I encounter the raw emotion of youth, which can be found throughout Isabel Pless' debut EP, Too Big for the Playground, Too Small for the Big Leagues. On the first few listens, the 20-year-old Jericho native's songs about social media blues and busted four-year plans left me feeling like I was trying to climb a wall without handholds.

I understood what Pless was saying, but my gut reaction was to take on the persona of some kind of cantankerous blowhard and say, "Listen, kid, you don't know from tough. I used to have to go to web cafés to break up over an email! And if you think college is hard, just wait until you have to pay for it for, like, ever." (OK, I sort of really mean that last one.)

Thankfully, my Andy Rooney alarm went off while I was relistening to the fourth track, "Burn Out." I was drawn in by the song's lovely piano figure and Pless' melody, but lyrics like this were tripping me up: "I take shit from people who talk to me like I'm 10 / What if I write a good song and never do it again?"

However, the more I let the song play, the more I recalled the sense of living in limbo that is young adulthood. It's a theme that resurfaces over and over again on the EP.

On "Politics of Lonely," Pless harmonizes with herself in an almost-ironic fashion as she wades deep into an ode to loneliness — particularly that type of loneliness exacerbated by watching others' lives.

Pless recorded the entire project in her bedroom, playing and singing every sound on the EP. For a first release — and an entirely DIY one, at that — Too Big for the Playground is remarkably well put together. As a producer, she treats her voice as the centerpiece it should be, using her acoustic guitar to form the majority of the rhythm. Pless also displays a knack for building atmosphere with sparse arrangements, something that bodes well for her career as she progresses.

The potential that the EP reveals stayed with me once I stopped thinking like a geezer. Songs such as "Family Tree" and "Mitosis" — both cleverly constructed folk-pop numbers that show a strong Phoebe Bridgers influence — point toward a growing sophistication in her songwriting.

Defaulting to "It has potential" can be an underhanded compliment. But in Pless' case, it's quite the opposite. As is evident in these five songs, she already has every skill necessary to put together something truly incredible. Too Big for the Playground isn't quite that, but it's an intriguing introduction to an artist coming into her own. Download it at isabelpless.bandcamp.com.