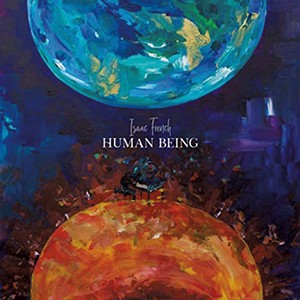 In a news story published by his alma mater, Castleton University, singer-songwriter Isaac French says of the title of his debut solo album, "Human Being is a double entendre to me. We all deal with struggles and heartbreaks as human beings, but it's the way you learn from them and treat others that really matters in the end."

True to his word, on Human Being French parlays breakups and self-doubt into 10 infectious pop songs with hip-hop and R&B flavor.

Listeners seeking motivation — and a song to add to a workout playlist — need look no further than the first track, "Waiting." French sings over moody electronic tones before the beat drops for the chorus. The St. Albans native sets the album's optimistic and striving tone with his inspirational lyrics: "Gotta get through this storm / Never closing doors / Tryin' to open more / Gotta make the change."

"Replay" employs audiovisual wordplay to describe feeling fatigued by the memory of an ex. It might inspire some to revisit the 2010 Iyaz hit of the same name just for fun.

Though French pulls out a few big notes that could earn a turn of the chair on "The Voice" — he auditioned for the NBC talent show in 2012, while attending Castleton — his vocal delivery is generally controlled. His voice is easy and well suited to pop music — the kind you can sing along to.

The multi-instrumentalist plays piano, percussion and guitar in the Burlington-based acoustic trio Nina's Brew, but there's little live instrumentation on Human Being. Instead, French submitted acoustic piano demos to producer and engineer Christopher Hawthorn of Studio 150, who gave the songs an electronic pop treatment. The result is a crisp, catchy collection that evokes the joy of dance music-era Usher as well as the subdued pop-trap sound of Lykke Li's latest album, So Sad So Sexy.

Though the cover art for Human Being, a painting by Nina's Brew bandmate Giovanina Bucci, is beautiful, it doesn't convey the album's sexiness and buoyancy. This isn't just a guy at a piano. It's an invitation to an experience, an opportunity to dance and sing one's way to a better self.

Human Being is available on iTunes and Spotify. Isaac French plays with Nina's Brew on Friday, March 29, at Stone Corral Brewery in Richmond.

Speaking of Isaac French, Human Being