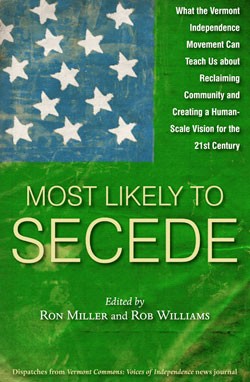 When Vermont Commons: Voices of Independence debuted in the summer of 2005, the homegrown newspaper devoted to exploring Vermont secession had, at the very least, a curious audience. In the age of George W. Bush’s presidency, wars in Iraq and Afghanistan and legislation such as the USA PATRIOT Act, the idea of breaking free from the United States struck many Vermonters as worth considering.

“I think that the Vermont secessionist movement is over. Has been for a long time,” says Frank Bryan, a professor of political science at the University of Vermont.

No longer are Vermonters rallying for Bush’s impeachment, a prospect 37 Vermont towns supported on Town Meeting Day in 2007. Rather than decrying national political leadership, Vermonters gave Barack Obama an overwhelming endorsement for the presidency in both 2008 and 2012.

“I’ll tell you my favorite joke: The loneliest person in America on the day after Obama’s election in 2008 was a Vermont secessionist,” says Rob Williams, who cofounded the Commons.

All this leaves one looming question facing a new anthology out this week from Vermont Independence Press called Most Likely to Secede: What the Vermont Independence Movement Can Teach Us about Reclaiming Community and Creating a Human-Scale Vision for the 21st Century. Is Vermont’s secessionist movement still relevant?

The book, edited by Williams and Ron Miller and distributed by Chelsea Green Publishing, collects more than 40 pieces that appeared in the Commons between 2005 and 2011. While the newspaper’s mission has long been exploring the possibility of Vermont’s nonviolent separation from the United States, these collected essays and articles range from political manifestos to straightforward essays about community-supported agriculture, local currency and the threat of peak oil. There’s lofty talk of secession here, of course — “Long live the UNtied States,” writes Williams in one selection from 2008 — but also practical explorations of how Vermont could become a more democratic, self-sustaining society.

It’s on that latter objective that the book’s success and appeal are likely to hinge. But front and center — and not just in the book’s clever title — is the issue of Vermont’s recent history, in which a small band of Vermonters pushed hard for a clean break with the union.

Vermont Commons introduced its 12-page, tabloid-style newspaper at the Warren Fourth of July parade in 2005. The Commons staff organized a float dedicated to Vermont independence and distributed its pilot publication among the crowd. “People didn’t know what to make of it,” Williams admits, but he says that Vermonters, regardless of their politics, are always game for a good conversation.

The Vermont secessionist movement had begun years earlier, and its inspiration — the first Vermont Republic — was older still. For nearly 14 years between 1777 and 1791, Vermont existed as an independent commonwealth. Vermonters took part in the American Revolution, but they also produced their own currency (Vermont coppers, minted in East Rupert), operated a postal system and organized their own militia.

Believers in the Second Vermont Republic, as the new wave of secessionists was known, envisioned a rebirth of that independent nation-state. Leading the charge was Thomas Naylor, the charismatic — and controversial — father of the SVR; Naylor died last December at 76, and Most Likely to Secede is dedicated to him. A retired Duke University economics professor, Naylor began writing about “downsizing” the United States as early as 1990, but it was in the aftermath of September 11, 2001, that he found an audience. He devoted the last 10 years of his life to promoting Vermont’s secession tirelessly, pumping out hand-addressed flyers and masterminding street theater. The antics drew headlines and followers — and not a few enemies.

“Thomas was irascible. He was stubborn. There was a year when he and I didn’t talk to each other,” Williams says. But he was also “indefatigable” — “a lion, if you will.”

Naylor, and the group he championed, suffered a tough blow after critics pointed out SVR’s loose ties to the League of the South, a neoconfederate secessionist group with white-supremacist undertones. Naylor lashed out at critics, and the secessionists found themselves, as Williams recalls, “dragged up and down the Vermont blogosphere.”

“A bunch of folks began to intimate that if you were a Vermont secessionist, you were a racist,” says Bryan, who feels the SVR caught a bad rap simply by appearing on national lists of secessionist groups — some of which did indeed invoke values of white supremacy.

Whether because of the bad press or the shifting political tenor of the country, interest in the secessionist movement gradually waned. Bryan says there weren’t enough people willing to do the hard work of making the case that Vermont could survive as an independent nation. The SVR struggled to recruit candidates to run for office. Bryan also believes the movement was hurt by distractions within the group. “Whenever you had meetings, a third to half of the people there were not secessionists,” he says. “They were there to push some gripe they had with the government.”

Williams admits that the secessionist movement in Vermont lost a good deal of its fervor in recent years — something he largely attributes to Obama’s election and reelection.

“There was much more clarity around the conversation when the Bush administration was running the show,” says Williams. “Let’s be honest. Bush and Cheney, for all of their faults, were pretty clear about what they wanted. Obama’s great genius has been to preserve the imperial status quo while talking like a progressive.”

But it’s not just national politics that Vermont’s band of secessionists will have to contend with in years to come. After Naylor’s death, Williams says, Vermont secessionists have another question to ponder. “With his passing, the question remains, ‘Will new people step up?’”

Julie Buck, who cut her teeth at Vermont Commons writing about the F-35 beddown in South Burlington, isn’t worried. “Thomas was a huge figure in this movement: inspiring, tenacious and fearless,” she writes in an email. “Most importantly, he was right. So the movement goes on.”

Williams believes the newspaper has plenty to be proud of, as he looks back on the nearly eight years of that conversation that played out in Vermont Commons and is now encapsulated in Most Likely to Secede. “We were using the phrase ‘peak oil’ back in 2005, 2006, when no one was really talking about it yet,” he says. Williams thinks the newspaper was ahead of the curve on coverage that now, looking back, strikes him as prescient: energy dependence, currency and banking, local foods.

And he remains bullish on the outlook for Vermont Commons, though the newspaper was never a big enterprise. At its height, it could pay the editor and designer and break even, running on a $50,000 annual budget. Peak circulation was 12,000 copies, distributed at 350 locations around the state. But the newspaper took, as Williams put it, “a real hammering” in recent years. Tropical Storm Irene wiped out much of its small advertising base, and the editors decided to publish exclusively online. They hope to revive the print edition in the future, and a few months ago they made the transition to a member-supported cooperative model.

Meanwhile, a few young Vermonters are finding themselves drawn to Vermont Commons, even if they don’t identify as secessionists. Among them is Dylan Kelley, a 26-year-old writer, photographer and board member for the publication. He believes the conversations fostered in the (now virtual) pages of the Commons are “more relevant now than ever,” even for those readers — Kelley counts himself among them — who shirk the secessionist label.

The Commons ethos, Kelley continues, “speaks to that independent nature that Vermonters have. Vermonters are really, really happy to conduct their own affairs in the way that they see fit.”

Bryan agrees. Even as he declares the secessionist movement “over,” he says that Vermont Commons has plenty to teach Vermonters. (Bryan’s essay “Vermont’s Genetic Code: Toward a Decentralist Manifesto,” ran in Vermont Commons in 2006 and 2010, and appears in the new book.) Bryan still calls himself part of the “Vermont independence” movement, but draws a distinction between the political trappings and logistics of seceding and the exercise of imagining a more self-sufficient Vermont.

Vermont Commons’ contribution to the conversation, Bryan says, has been fostering an “intellectual cadre of some pretty smart, courageous and futuristic people” — some previously on the political left, others on the political right — who “now agree that human-scale democracy on a local level is better than the federal level.” He hopes that Most Likely to Secede will advance that thought experiment.

“The argument that small is beautiful and better, and that democracy is only possible in small places — that transcends time,” Bryan says. And if any part of the United States can achieve a greater level of independence and self-sufficiency, Bryan believes, it’s Vermont.

“I think we’re smarter and work harder and [are] more democratic,” he says. “If you just give us the dough and say, ‘You do it,’ we’d do a better job of it.”

The print version of this article was headlined "If at First You Don't Secede...".