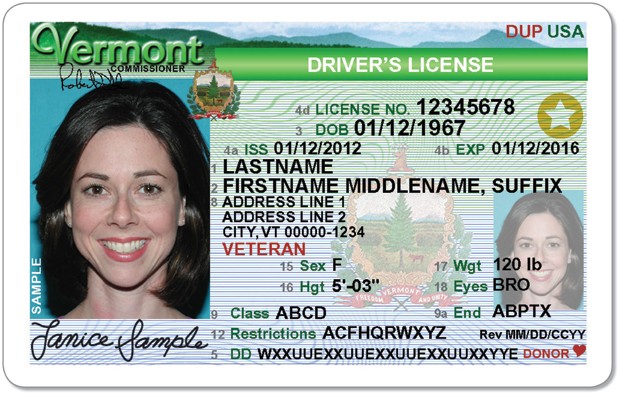 In New Hampshire, protesters quoted Patrick Henry in their successful battle against a federally initiated identity card known as “Real ID.” In Montana, the governor told the Department of Homeland Security to “go to hell” and rejected the federal government’s ID card as a “harebrained scheme.”

In Vermont, by contrast, the Department of Motor Vehicles recently posted an update on its website announcing it will comply with the federal plan and begin issuing the controversial identification cards in January.

Vermont Department of Motor Vehicles commissioner Robert Ide said his agency is excited to offer the new ID — a souped-up, supposedly tamper-proof driver’s license. He said Vermonters will be ready when and if the federal government makes Real ID a prerequisite for everything from air travel to entering a federal building.

“It’s a requirement of the federal Homeland Security office, and we have been working towards it since before I got here,” said Ide. Noting the sign-up process is “not particularly onerous,” he added, “We think most people will like having them.”

But others are disappointed that Vermont did not follow the lead of at least 25 other states and resist the Homeland Security mandate. They see the Real ID as a de facto national identity card, a step that privacy advocates fear will allow for increased government tracking of innocent citizens without making the country any safer.

“Once you have a national ID, you will have it for all kinds of things. One of the things Americans prize is privacy and anonymity, and when you have to have identification all the time, it’s not American,” said Allen Gilbert, executive director of the Vermont American Civil Liberties Union.

The Real ID program came about in response to the terrorist attacks of September 11. The hijackers were carrying several forms of government licenses and identification cards, and, seeking to prevent future attacks, the 9/11 Commission recommended a national standard for IDs.

In May 2005, Congress passed the Real ID Act, calling for federal standards for driver’s licenses and declaring that state-issued licenses could not be used for federal identification. But the law left the details to DHS, which in 2007 circulated an implementation plan that was roundly criticized by states. The agency went back to the drawing board, but every alternative offered since has either been scrapped or delayed.

Currently, the Vermont DMV is telling those born after December 1, 1964, that they’ll have to obtain a Real ID by December 1, 2014; those born before that date will have an extra three years to get one — or risk being denied access to domestic flights and federal facilities, according to DHS. (A passport would also do the trick, but millions of Americans do not have passports, which cost at least $135 each.)

The deadline is squishier than it sounds. DHS has repeatedly delayed imposing the Real ID requirement, and Ide said even his department isn’t sure whether it will ever be enforced.

DHS says that only 20 states, including Vermont, had demonstrated compliance with the Act — that is, they had either begun issuing Real IDs or were ready to do so.

Meanwhile, half the states in the union have either passed laws explicitly forbidding their governments to issue the cards or declared an unwillingness to comply. Governors have gone on record to say the DHS is bluffing and will never require the identification cards to catch a plane in the U.S. Earlier this month, the Ohio Bureau of Motor Vehicles announced it was abandoning plans to implement Real ID, citing privacy concerns.

To obtain a Real ID, Vermonters will have to present a valid passport or birth certificate, a Social Security card or pay stub, and either two pieces of mail or two other documents that show a home address. (The Real IDs will cost $50, same as the driver’s license.)

That information would be kept in a state database that, unlike current driver’s license information, feeds into a central federal database, where it could theoretically be accessed for an array of purposes.

Critics worry that the identification card system will put potentially sensitive information in the hands of the federal government at a time when revelations about abuse of surveillance powers are becoming routine.

They’re also concerned that the federal database will be vulnerable to hacking.

“IDs do nothing to stop those who haven’t already been identified as threats, and wrongdoers will still be able to create fake documents,” the non-profit Electronic Frontier Foundation said in a recent report. “In fact the IDs and database will simply create an irresistible target for identity thieves.”

Another fear: that both government and the private sector would begin requiring the physical Real ID for an array of purposes, gradually chipping away at personal privacy. They cite the sprawling use of the Social Security number, which was designed to be used only for taxes and Social Security but is now routinely demanded by public agencies and private businesses.

Groups who advocate for immigrants and foreign nationals note that getting a driver’s license is much easier for non-citizens than digging up the documents needed for a Real ID.

Some religious extremists see a sinister intent behind the document. They’ve said the Real ID is the so-called “mark of the beast” or sign of the devil that is foretold in Revelations: “And that no man might buy or sell, save he had the mark, or the name of the beast, or the number of his name.” Citing these concerns, a West Virginia lawmaker pushed for a religious exemption to enrollment.

The Vermont DMV is issuing Real IDs because the federal program is essentially an opt-out program, Ide said, and state lawmakers never opted out. In the absence of a law instructing DMV officials to do otherwise, Ide’s department worked diligently to meet DHS’ list of 32 criteria to issue the identifications, using $1.1 million in federal grant money.

The one legislative effort to short-circuit Real ID in Vermont has largely been forgotten. In 2007, the Vermont House passed a resolution urging the U.S. Congress to “reconsider” Real ID. The senate never took up the resolution, and it appears to have never again been considered in the Statehouse.

The lead sponsor of that bill, Chester Democrat Kathy Pellett, who has since left the legislature, said she was concerned about a potential erosion of privacy as well as the cost of the program.

“I don’t think it’s a good idea. I can’t see any reason to have it,” Pellett said after being informed that the DMV is going to roll out the program. “The same concerns are there. The state should fight this. It’s absurd.”

In response to questions from Seven Days, Leahy spokesman David Carle declined to say whether the senator supported Vermont’s voluntary adoption of it: “Due in part to Senator Leahy’s advocacy and oversight, the Department of Homeland Security ... has been admirably flexible in extending deadlines, deferring enforcement and in other ways working with states to come into compliance within reasonable timelines. Implementation is an ongoing oversight issue that is certain to be discussed again in future oversight hearings with the incoming DHS secretary.”

Moving forward, Vermonters will have a choice: They can get either a Real ID, a traditional driver’s license or an enhanced driver’s license, which allows travel to Canada, as well as Mexico, Bermuda and the Caribbean but does not require the documentation and data storage of a Real ID.

The Real IDs will be marked with a gold star, and the traditional licenses will come with a printed statement advising that it is “not for federal identification.”

While they got an earful from privacy groups and advocates for immigrants and the poor in the months prior to the rollout, Seymour said, the department has received few complaints since.

“The Connecticut experience has been very good,” Seymour said. “We did not have the confusion we thought we might have over it.

While declining to estimate how many Vermonters will choose Real IDs over a traditional license, Ide said he expects some holdouts: Even today, about 5 percent of people who currently obtain driver’s licenses refuse to have their photo taken and carry around the so-called “green paper” licenses.

But he said his agency would tell customers that the Real ID may soon become an essential part of their lives.

“All a driver’s license proves is that at one point in time you could pass a skills test to drive a motor vehicle,” Ide said. “It has morphed into an identification document. We like to think that we’re very concerned about [privacy] and we think we are good guardians of people’s records. That’s our business. We believe we can handle the task.”