Is the Use of Formaldehyde on VT Dairy Farms Making People Sick? 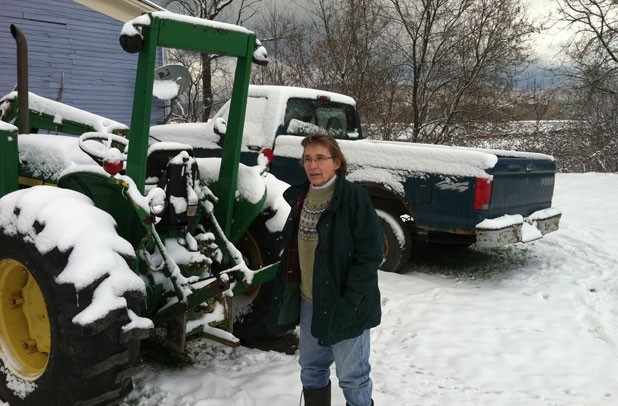 An Enosburg Falls woman is alleging that the use of formaldehyde on nearby dairy farms is to blame for a series of disturbing, unexplained medical ailments that she and dozens of other Franklin County residents are experiencing. Those complaints appear to be serious enough to warrant investigations by the Vermont Department of Health the Vermont Agency of Agriculture, Food and Markets; Vermont Occupational Safety and Health Administration, and the U.S. Centers for Disease Control and Prevention.

Thus far, there’s no proven link between the medical ailments and the use of formaldehyde in local agriculture. The industrial chemical is used as a disinfectant on Vermont dairy farms to control a costly, contagious and potentially devastating bovine disease called papillomatous digital dermatitis. PDD, also known as hairy foot wart, can decrease cows’ fertility, make them lame and reduce their milk output by as much as 50 percent.

No one knows how much formaldehyde is being used on Vermont’s dairy farms, as its sale, transport, use and disposal are largely unregulated. But the chemical, which the federal government reclassified in June as a “known human carcinogen,” routinely finds its way into manure pits and, subsequently, onto hay fields and croplands throughout Vermont.

State health and ag officials admit they have no idea what the long-term consequences are to public health or the environment. Of particular concern are the estimated 2000 or more undocumented workers employed in Vermont’s dairy industry. Most come from Mexico, speak little or no English and may be at heightened risk from long-term formaldehyde exposure. This is especially problematic if they’re not using protective masks, boots and gloves, and are unable to read safety precautions for handling and applying the chemical.

Formaldehyde is a neurotoxin that can be inhaled or absorbed through the skin. According to an OSHA fact sheet, it can cause severe allergic reactions to the skin, eyes and respiratory tract, and can even be fatal. The consequences of formaldehyde exposure, including cancer, can occur long after an initial exposure.

Amy Cochran of Enosburg Falls says it was her unique combination of education and experience that led her to suspect formaldehyde might explain some unusual ailments in the area. The self-described “formaldehyde queen” is a 58-year-old retired farmer and high school chemistry teacher, a former emergency medical technician, and, until recently, served as the animal control officer for four Franklin County towns.

Cochran’s own health problems first surfaced last spring, when she began experiencing rapid weight loss, facial drooping, tingling in her arms and legs, numbness at the base of her neck, difficulty walking, and, she says, “panting like a rat that’s eaten poison.”

“This was really scary for me,” she adds, “because usually, I’m as healthy as a horse.”

Cochran visited numerous specialists in Vermont, but none could diagnose her. She underwent a battery of tests for various conditions, including mold allergies, lupus, multiple sclerosis and even brain tumors. All came back negative.

Despite her condition, Cochran continued working as the animal control officer for the towns of Montgomery, Richford, Enosburg and Berkshire. It was through her travels around Franklin County, she says, that she encountered other residents with unexplained health complaints similar to her own.

Suspecting that the problems were all linked to something in the environment, Cochran began mapping when and where people’s symptoms appeared. In all, she compiled 32 names in four towns.

According to Cochran, people reported their symptoms were worse on days when local farmers were spreading manure on their fields; those living closest to the fields had the most acute symptoms.

Until two months ago, Cochran lived with her husband on a 12-acre farm along the Missisquoi River, directly across from a 1200-cow dairy farm. Cochran says her symptoms coincided with the 2011 manure-spreading season, which ran from April 1 to December 15. The couple temporarily moved out of their house because of her chemical hypersensitivity.

It wasn’t until October that Cochran’s suspicions were confirmed by a doctor at Dartmouth Hitchcock Medical Center in Lebanon, N.H. His diagnosis: formaldehyde poisoning.

Cochran has talked to everyone in state and federal government who would listen to her, including the Vermont Department of Health, the Agency of Agriculture, OSHA, VOSHA, the CDC and the U.S. Environmental Protection Agency.

Steve Monahan, director of workers’ compensation and safety at the Vermont Department of Labor, confirmed last week that VOSHA has an “open investigation” into one Vermont dairy operation to determine whether its use of formaldehyde conforms with OSHA regulations. Monahan wouldn’t identify which farm is under investigation or even the county in which it’s located.

The state health department has also taken an interest in Cochran’s findings. Bill Irwin is chief of radiological and toxicological sciences at the Vermont Department of Health. In the last few months, his office has received “a number of complaints” about medical problems that may be related to formaldehyde exposure on dairy farms. He’s working with the Agency of Agriculture and VOSHA to evaluate the risk to public, and workers’, health.

One challenge, Irwin cautions, is the fact that the chemical is virtually ubiquitous in the environment. Automobiles, woodstoves, small engines, cigarette smoke — even some new products — emit, or off-gas, formaldehyde. Exposure to the toxin was a concern during cleanup efforts related to Tropical Storm Irene, because soggy basements tend to bring it out. Formaldehyde was the culprit in those FEMA-issued trailers that made Hurricane Katrina survivors sick.

How is this toxic compound finding its way into manure? As a treatment for hairy foot wart. Although its exact cause is unknown, the disease thrives in dark, wet and warm environments, according to Kristen Haas, state veterinarian for the Agency of Agriculture. Cows that stand all day in manure-strewn stalls, such as the kind found on larger dairy operations, are more susceptible than those that graze in pastures. To prevent outbreaks, some farmers walk their cows through formaldehyde footbaths on a weekly, or even daily, basis. The long-term health effects of formaldehyde on the cows themselves are unknown.

“[Hairy foot wart] is a pretty contagious disease, and it’s unlikely to affect just one animal or even a minority of animals,” Haas says. “And there’s not a widely recognized, fully agreed-upon, good treatment ... which is why the impact on the dairy industry can be pretty significant.”

Hairy foot wart isn’t a new phenomenon, she adds; it first appeared in Vermont about 25 years ago. Agency of Agriculture records indicate dairy farms started using formaldehyde to combat it around 1992.

Interestingly, one of the more detailed analyses of hairy foot wart in Vermont comes from a 2008 student research project at the University of Vermont’s Rubenstein School of Environmental and Natural Resources. That study concluded that there are “no recommended disposal methods” of either formaldehyde or copper sulfate, an equally effective but more expensive treatment for the disease.

“The baths are dumped out without regard to environment, human or animal safety,” the UVM study reads. “Due to the harmful effects of acute exposure, the potential exists that the dumping of this chemical waste has serious negative impacts.”

Lynn Metcalf, program chief for the Agency of Natural Resources’ hazardous waste management program, confirms that only unused supplies of formaldehyde are considered industrial waste and must be disposed of as such.

Discarded formaldehyde is “not a hazardous waste and ... is no longer covered under our rules.”

Diane Bothfeld, the Agency of Agriculture’s deputy secretary for dairy policy, won’t speculate on the extent to which formaldehyde is used on Vermont dairy farms today. But there’s some anecdotal data: Three years ago, the agency and VOSHA launched a broad-based farm-safety program to train farm owners and managers about a range of workplace hazards, including pesticides and other agricultural chemicals. Of the 15 farms that the agency visited over the last three years, she says, none was using formaldehyde.

“I think that what is in [place] at the federal and state level allows us to do the job we need to do,” she says. “But we’ve been in contact with the FDA to make sure that all their policies around formaldehyde are adequate at this time” to minimize human exposure risks.

Amy Cochran isn’t the only Franklin County resident who has gone public with her alleged formaldehyde-related ailments. About eight months after Karen Nall moved from West Jay to Montgomery Center, she started having grand mal seizures that left her in a coma for days. Nall had survived a near-fatal car accident in July 2005, but within eight weeks, she was fully recovered and back to work. Repeated brain scans after her seizures began found no injury that would explain them; Nall’s doctors told her they weren’t caused by epilepsy or the accident.

Like Cochran, Nall has also experienced severe, unexplained weight loss, dropping from 170 to 117 pounds in a matter of months. She’s only 44 but admits, “I look 60.” Thin, gaunt and pale, Nall had a necrotic gall bladder removed recently and continues to suffer from other digestive ailments that confound her physicians. She claims her seizures began shortly after the start of manure-spreading season.

Then Tropical Storm Irene hit. Walking through her flooded basement, Nall recalls recognizing a pungent odor that was very similar to the smell of her great-uncle’s funeral home. A FEMA worker told her it was formaldehyde.

Unlike Cochran, Nall’s doctors haven’t diagnosed her with formaldehyde poisoning. But her three dogs, which occasionally play and roll in the field behind her house after farmers have spread manure, have experienced ongoing irritation on their heads and muzzles. Nall’s vet diagnosed their symptoms as caused by acute exposure to formaldehyde. Then one of the canines, a previously healthy 3-year-old English mastiff, died suddenly, with a black substance oozing from its orifices. The cause of death could not be determined, according to health records provided by Nall’s veterinarian.

Nall’s vet asked not to be identified in this story for fear of losing the business of local farmers. Others who have reported health problems to Cochran also express a reluctance to voice their concerns about farmers’ formaldehyde use. Many don’t want to alienate their neighbors or harm their businesses.

But as Nall emphasizes, this isn’t a case of flatlanders moving to Vermont and complaining about the stink of manure. Nall is a sixth-generation Vermonter whose father owns dairy cows.

Likewise, Cochran doesn’t believe the spreading of manure is the problem. “It’s not the shit. I’m used to shit. My husband was a dairy farmer for 30 years,” Cochran says.