Is the Mardi Gras Parade Too Rowdy for Burlington? 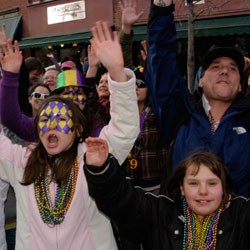 But last year’s Mardi Gras, blessed with unseasonably warm weather, made Church Street look more like Bourbon Street. Parties were raging by 9 a.m., beer kegs were rolled into police cruisers, busloads of wasted college students came from out of state, and numerous instances of public urinating and vomiting were reported. One parade spectator was injured by a beer bottle that fell from an open window. Medical crews had trouble reaching their patient in the densely packed Church Street crowd, which numbered in the tens of thousands.

Now the city is making some changes. This year’s parade will head west (downhill) on Main Street rather than turning up Church. Burlington Police Chief Mike Schirling says he expects the reroute to ease some of the congestion on the marketplace and keep businesses accessible. The event is scheduled for Saturday, March 5 — a weekend when, as it happens, the University of Vermont is on spring break.

The problem is “not the event. It’s the name Mardi Gras,” explains Schirling. “When it becomes an excuse to binge drink for other folks, it loses the whole point of the event, which is to raise money for such a great cause” — the Women’s Rape Crisis Center.

When asked if the city will consider pulling the plug on next year’s parade if things don’t improve this year, Schirling says, “I don’t know. I don’t want to go there. Certainly, if it continues to deteriorate, we’re going to have to come up with some options.”

Cathleen Wilson is executive director of the Women’s Rape Crisis Center, the state’s largest advocacy group for survivors of sexual violence. Thirteen of the previous 15 Mardi Gras events have served as major fundraisers for her organization, bringing in about $30,000 annually.

“This is our bread and butter,” says Wilson. She “completely understands” the city’s concerns about last year’s event, but asks, “What are they going to do to fill that $30,000 hole in our budget?”

The crisis center has always fielded questions about its association with Mardi Gras, Wilson says, in part because of its partnership with Magic Hat Brewing Company. In the past, some WRCC supporters asked whether it’s appropriate for an organization that assists rape survivors to raise money at an event that, in the eyes of many, is synonymous with intoxicated behavior.

Wilson’s response: The WRCC promotes a “nuanced and complex” message about alcohol consumption and never characterizes booze as the “cause” of a sexual assault, only as a contributing factor in some cases. Operators on the rape crisis hotline don’t ask callers if they were intoxicated at the time of their attack, and only record that information if a caller volunteers it.

Moreover, Wilson points out, neither the WRCC nor the emergency room at Fletcher Allen Health Care is any busier with sexual assaults on Mardi Gras weekend than they are any other weekend of the year.

Nevertheless, this year both the WRCC and Magic Hat are making a concerted effort to promote messages about responsible drinking. The WRCC has launched a new “wingman” campaign to redefine the role of friends in situations where sex and alcohol mingle. The goal, Wilson explains, is to “get people talking about these issues” without coming across as preachy or puritanical.

For its part, Magic Hat will once again prominently feature its “Stop before you’re stupid!” message in all marketing material for the 2011 Mardi Gras. Event organizer Stacey Steinmetz says she understands the police department’s concerns. Magic Hat is taking measures to make the event more family friendly — for instance, moving the “Young Jambalayas” section, designated for families with children 10 and under, from Church Street to the bottom of Main, far from most downtown bars.

“Magic Hat wants the kids to have a positive experience,” Steinmetz adds. “This event is built on community, so we’re asking our peers and the community to try to self-police a little here.”

And, where the community doesn’t “self-police,” Burlington’s cops will do it for them. Schirling says his officers will be more vigilant than ever about enforcing open-container and public-intoxication laws. Parade floats will be more closely inspected and scrutinized — not to kill the buzz, Schirling says, but to ensure everyone has a good time.

“If you’re going to come downtown for Mardi Gras, great, but do it safely, and remember it’s an event to support a critical resource in our community,” he says.