Is That a Puking Man Icon on Stewart's Beer? 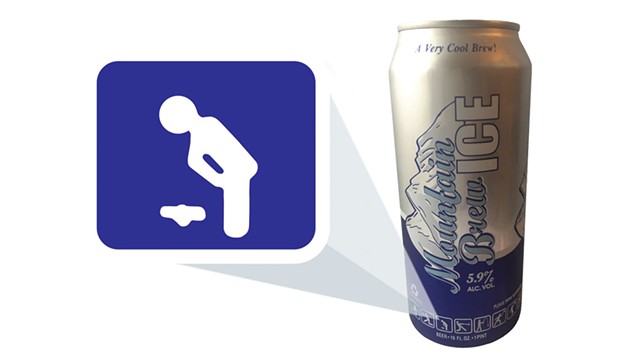 Is Stewart's Shops guilty of the worst package-design fail of the decade? Or is the employee- and family-owned convenience store chain just a fervent advocate for truth in advertising? The answer may depend on your personal taste in beer.

This week, a Seven Days reader and regular visitor to New York's North Country wrote us to inquire about the design of the beer can for Stewart's store-brand discount lager, Mountain Brew Beer Ice. Specifically, the sides of the 16-ounce, silver-and-blue tall boys are emblazoned with icons of various sports, including baseball, basketball, bowling, soccer and golf.

But sandwiched between images of a volleyball player and a fisherman is the likeness of a person hunched over at the waist and facing a puddle on the ground. Though several Seven Days staffers offered plausible theories about the activity represented here — bocce, quail hunting, mushroom foraging, competitive hole gazing — the prevailing opinion was that it looks exactly like someone who just vomited after a heavy drinking session.

Was this icon a head-slapping marketing botch, akin to the official Vermont maple syrup signs that resemble a man urinating into a sap bucket? Was it slipped in surreptitiously by a prankster product designer, like the pig image that prison inmates artfully concealed within decals destined for Vermont State Police cruisers? Or was the Olympic hurler a deliberate inside joke meant for sharp-eyed patrons of the Saratoga, N.Y.-based convenience store chain? WTF?

Turns out our Vermont reader, who asked not to be identified because he works in marketing himself, isn't the first Stewart's customer to spot barf boy on the beer can. In the hipster world of bargain-basement beer guzzlers, the redundantly named Brew Beer has achieved a certain cult status of the "so-bad-it's-good" variety. (Our unnamed reader said he uses it to kill slugs in his garden.)

For years, suds aficionados have gone online to laud or laugh out loud at Stewart's dirt-cheap malt liquor. Some in the latter camp have picked up on the spewing stick figure as a validation of their atrocious reviews of the beer. There's even a parody promotional video, viewable online, in which a lost hiker discovers a dirt-covered six-pack of Mountain Brew in an abandoned Volkswagen Microbus. Its tagline: "Mountain Brew: Can't get any worse."

In an August 2015 online beer review for Albany's Times Union newspaper, Chad Polenz, craft beer consultant and coauthor of The Handbook of Porters & Stouts: The Ultimate, Complete and Definitive Guide, characterized Mountain Brew's taste as "nothing but corn, metal and, quite frankly, dirt." The "mouthfeel" was "oily and slick." Polenz concluded that the beer and its lower-calorie cousin, Mountain Brew Light, were "two of the worst beers I've ever had in my life. I can't believe they exist."

Other reviewers were only slightly more generous. Mr. Dave, author of the food blog Ridiculous Food Society of Upstate New York, put Mountain Brew solidly in the "piss beer" category, writing that it "smells vaguely of socks and the flavor is a bit funky, with virtually no hints of hops.

"But guess what folks? Get those silver bad boys goddamn ice-ass cold and you can slam these suckers like water," he added. "You can't beat the price with a stick, and several cases of Mountain Brew is the flippin' perfect thing for a hot-ass day in August when you feel like getting shitty drunk with the boy-os on the cheap."

Indeed, the beer, which boasts a buzz factor of 5.9 percent alcohol by volume, retails for just $3.99 per six-pack before tax and deposit. According to Stewart's own promotional material, it can be sold so inexpensively because the company warehouses and distributes the beer itself. This also explains why Mountain Brew is available in Stewart's 325 locations in northern New York but in none of its 10 outlets in Vermont, where, according to the State Department of Liquor Control, a beer retailer cannot be its own distributor unless it brews locally.

Maria D'Amelia, media and public relations spokesperson for Stewart's, elaborates that Mountain Brew debuted in 2010 in 12-ounce cans. Originally made by Genesee Brewing in Rochester, N.Y. — not exactly a ringing endorsement among craft beer connoisseurs — it's now a product of Associated Brewing of La Crosse, Wis.

What does Stewart's have to say about its spewing sports logo, which has appeared on the 16-ounce beer cans since their 2013 redesign? D'Amelia says she's been asked the question numerous times and has heard a variety of theories about what the image represents, among them ice fishing, a spilled drink and, yes, a hangover heave. Still, D'Amelia refuses to cough up a definitive answer.

"Our mystery man has certainly left people abuzz for some time now," she says with a sly chuckle. "People have tossed out some ideas along the way, but we have always left it to the customers' imagination ... While we take pride in our products, we also know how to have fun."

Presumably, though, only in moderation.

The original print version of this article was headlined "Why Does the Stewart's Beer Can Feature an Icon of a Man Puking?"