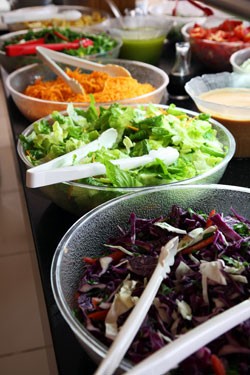 Salad-bar syndrome: It sounds slightly ridiculous, no? Is it the sinking dread that visits salad-bar grazers as they stare listlessly into the bar, overwhelmed by choices? — chick peas and carrots and corn, oh my! Or could it be a nasty foodborne illness transmitted through super-powered sneezes that blast right past the plastic guard?

When Hinesburg resident Wright Cronin told Seven Days that his doctor recently suggested he might be suffering from SBS, we just had to get to the bottom of it. WTF is it? Is it as silly as it sounds? And how does one get it?

“It might mean different things to different people,” says Dr. William Newman of Allergy & Asthma Specialists of Northern Vermont in Essex. But, he insists, there’s at least one legitimate condition that goes by the name salad-bar syndrome — and it all comes down to sulfites.

Many people are sensitive to sulfites, preservatives with antioxidant and antibacterial properties, the doctor told us. They’re commonly found in beer and wine, medications, packaged dried fruit, and nuts. And, because sulfites keep veggies from turning brown, they’re sometimes found in salad bars.

“There is definitely an effort to make that lettuce look appealing even if it’s been out there for a few hours,” Newman says. It’s not uncommon, he adds, for restaurants or grocery stores with salad bars to spray their raw produce with a sulfite preservative. “You can see why they’d want to do it, but they may not disclose this.”

Seven Days called area businesses with salad bars to find out if anyone was spraying with sulfites. Prepared-foods manager Adam Pheiffer at City Market said that store doesn’t spray anything on its veggies. “Food comes in, we wash it off and put it on the salad bar,” he said.

At the South Burlington Price Chopper, a deli manager said, “We don’t put anything on our salad bar. But our lettuce and stuff comes in a bag, so I don’t know if something has been sprayed on it before it comes to us.”

The U.S. Food and Drug Administration, U.S. Department of Agriculture, and Bureau of Alcohol, Tobacco and Firearms all regulate the use of sulfites in packaged foods, which is why you’ll often see the phrase “contains sulfites” on wine labels and bacon packaging. While the FDA has prohibited the use of sulfites to maintain the color and crispness of fresh fruits and veggies in salad bars since 1986, Newman says food services sometimes still use their own spray. “It’s not like it’s a hard thing to find,” he says.

According to a 2011 University of Florida study, the FDA regulations don’t require managers of food-service establishments to disclose to consumers if they’ve used sulfites. “Consumers should therefore be careful and not expect the waitstaff at restaurants to know this information, as erroneous information may be given,” the study concludes.

For most people, ingesting sulfites is nothing to worry about. But in some folks, especially those with asthma, the preservatives can cause a kind of allergic reaction — a cough, phlegm or blockage of the airway. “Ingestion [of sulfites] liberates sulfur dioxide, and that can be a trigger for asthma,” explains Newman. “It’s really no different from an asthmatic having exposure to other things that flare asthma — attending the Olympics in Beijing, or getting the flu, or being allergic to the cat that was just acquired as a pet.”

Cronin, a 31-year-old psychotherapist, has asthma. He doesn’t drink, so he hasn’t experienced any sulfite sensitivity from beer or wine. “I talk for a living,” he says. So he was acutely aware of the scratchiness in his voice and the cough that developed each time he ate lunch from his favorite local salad bar. “It would last for an hour or so,” he says. “I started to think I was allergic to raw veggies.”

The symptoms were persistent enough that the next time Cronin went to the doctor, he brought it up. That’s when his doc suggested he might be suffering from SBS.

“It seemed unique and funny to me,” Cronin says. “But there’s a part of me that kind of loves shit like that.”

So he took the physician’s diagnosis to heart. He stopped visiting the salad bar — and, sure enough, he’s been cough and phlegm-free ever since.