Is Irene to Blame for Vermont's Rising Unemployment? Yes and No 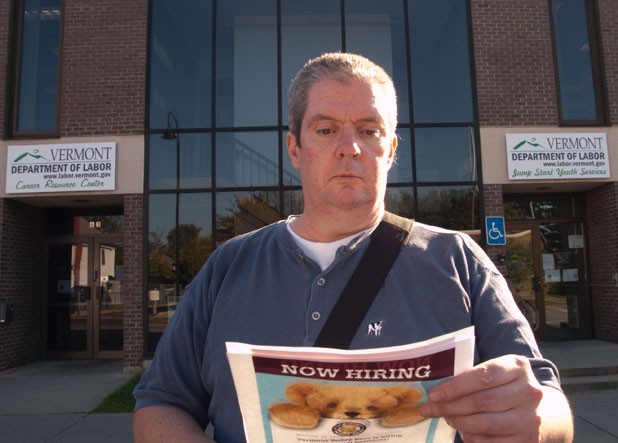 Tim Doolin has worked an array of jobs in the course of his professional life: limousine chauffeur, ferryboat deckhand, forklift driver loading airfreight. But now the 46-year-old Essex resident would be happy for almost any job — anywhere.

After five years without full-time work, several of which he spent caring for his ailing father, Doolin has expanded his job search nationwide. He’s applied to Delta Airlines in Kentucky and UPS in Iowa. Recently, he sent a résumé to Aloha Air Cargo in Hawaii, where Doolin has a cousin.

“At least I’d have a sofa to surf on until I get on my feet,” says Doolin, who stopped by the Vermont Department of Labor job center in Burlington last week to check the bulletin board. “I can be packed up and ready to go in 24 to 36 hours. You just tell me where.”

Doolin is not alone. After months of steady decline, Vermont’s unemployment rate has started ticking upward again. The number of jobless Vermonters has climbed for the last four consecutive months, from 5.4 percent in May to 5.9 percent in August. Vermont Labor Commissioner Annie Noonan says the number will likely rise again when the September report comes out, largely due to livelihoods lost to Tropical Storm Irene.

As of last month, 21,000 Vermonters lacked a full-time job. That number nearly doubles when you account for underemployed people and those who have stopped looking for work. While that figure is far lower than the national unemployment rate of 9.1 percent — and well below the state’s high point of 7.3 percent in the spring of 2009 — Vermont labor officials aren’t exactly encouraged.

“An upward trend is not a positive one,” says Mathew Barewicz, economic and labor market information chief at the Vermont Department of Labor.

Barewicz cautions that monthly jobs figures are subject to revision, and that Vermont’s low population can mean a few jobs lost or gained will swing the rate more dramatically than in bigger states. What the figures do illustrate, he says, is that the national recovery has stalled — and that Vermont is not insulated from the country’s economic gyrations.

“This was not the summer of recovery,” Barewicz observes.

Irene’s floods have had a mixed impact on employment. Jobless claims nearly doubled in the first two weeks after the storm, peaking at 1179 on September 3. Hard-hit Killington Resort initially filed a mass claim for 300 displaced employees but was able to put many of them back to work within a few weeks, Noonan says.

On the other hand, the devastation created a surge in demand for construction work — the industry hardest hit during the recession in Vermont. Between 2007 and 2010, almost a fifth of all construction jobs in the state disappeared. Labor officials estimate 400 workers are presently employed rebuilding roads, bridges and flood-damaged structures.

“Having this increased activity is very important,” Barewicz says. “It’s unfortunate it had to come at the hands of a natural disaster.”

Construction contractors sprang into action post-Irene and were able to hire back scores of idle workers, says Cathy Voyer, executive vice president of the Associated General Contractors of Vermont. Her organization served as a clearinghouse for flood-battered towns in need of quick repairs, connecting them with a network of 150 commercial firms in Vermont, New York and New Hampshire.

The question now, Voyer says, is how and when the contractors will be paid for their work.

“We’ve provided the manpower and all the supplies, and now we need to be paid,” Voyer says. “I’m not saying [towns] are slow in paying, but it may become a concern in the future if the payment is not as quick as the response was. Ultimately, it puts jobs at risk.”

The prolonged economic downturn has forced many Vermonters to get creative about making ends meet. Mia Troy-Vowell had a mid-level public relations job at Burton before she was laid off in February 2010. Unable to find comparable work, she sold snowboard gear on eBay, consigned clothes at Plato’s Closet in Williston, and looked into selling her blood and eggs. She eventually hit the craft-fair circuit, selling Scrabble-tile pendants and mosaics made from broken plates.

In between crafting art and cover letters, Troy-Vowell says she ends up watching a lot of daytime television in her Vergennes home.

“I learned so much about the legal system thanks to Judge Judy and Judge Joe Brown,” she deadpans. “There’s this company out of Norway, their website is onepiece.com, and I’ve looked into them sponsoring me. It’s a one-piece sweat suit. I think it’s the perfect uniform for the unemployed because I don’t like to do laundry and I don’t like to shower.”

Kidding aside, Troy-Vowell has searched far and wide for local work — even briefly taking a public relations job in Montréal before she was laid off at the end of July.

“It’s tough because there really aren’t that many jobs in Vermont — at least for my skill set,” she says. “You can only apply to Green Mountain Coffee [Roasters], Vermont Teddy Bear and Ben & Jerry’s so many times.”

So now Troy-Vowell is pursuing what she calls the “karmic route.” She’s spending her time volunteering on the board of All Breed Rescue, a dog-adoption organization. That led her to a business idea — a doggy daycare she plans to open in South Burlington in the coming months.

“I’m pretty sure I’m not going to get laid off this time,” she says, cracking up. “Here’s hoping.”