Is Doug Isham Imposing His Conservative Values on the Winooski Board of School Trustees? | Education | Seven Days | Vermont's Independent Voice

Is Doug Isham Imposing His Conservative Values on the Winooski Board of School Trustees? 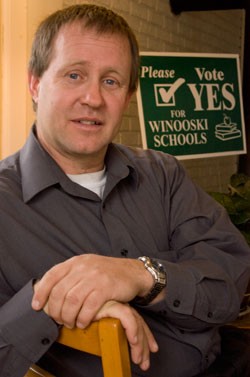 Is it a coincidence that Winooski public schools have been dragged into two political controversies within months of each other? Some say both episodes were instigated by school board member Doug Isham, a news junkie who describes himself as “leaning conservative.”

Isham says he was just responding to parents when he voted to ban Winooski students from viewing President Obama’s live address to the nation’s schoolchildren in September. He recalls a “firestorm” had erupted over rumors that Obama would make the speech a political pitch for nationalized health care. Winooski parents were stopping him in the street, he says, telling him they didn’t want their kids to see it.

Isham explained that much at a school board meeting that followed the controversial decision to make Winooski, one of the state’s most ethnically diverse districts, reportedly the only one in Vermont to pull the plug on what turned out to be a benign presidential pep talk.

What Isham didn’t mention were the more extreme remarks he ripped from a comment thread on his Facebook page and passed on to the school board chairman for consideration as they were debating whether students should see the speech. Seven Days obtained those emailed Facebook comments through an open-records request.

“Keep politics out of the schools,” wrote one commenter … It reminds me of Hitler.”

“You don’t think this is a little bit scary?” wrote another. “If not, look up the history of the Hitler Youth.”

“He is a communist and a person like that will never teach my children,” a third commenter wrote. “Sara [sic] Palin is a fine woman. Why not let her give a speech to the kids?”

Isham proudly proclaims that all voices are worth listening to. “There are extremists on both sides, and every single citizen has a right to their opinion,” he says. “I’m not going to judge anyone on their political agenda.”

A single dust-up might pass unremarked, but just weeks after the one over Obama’s speech, someone complained to the superintendent about a short, 2-year-old anti-consumerist video called The Story of Stuff. The superintendent responded with a schoolwide memo warning any teacher who planned on using it in class to first clear it with higher-ups and send “opt-out” forms home to parents.

The timing was peculiar: The anonymous complaint came the day after Glenn Beck railed against the film on his Fox News show.

Green Mountain Daily fingered Isham as the complainant, without attribution, branding him the “mouth of Glenn.”

A Winooski teacher tells Seven Days she clearly overhead Isham raising objections to The Story of Stuff with the superintendent during a special board meeting in September. The teacher asked to remain anonymous for fear the remarks could jeopardize ongoing contract talks with the school board.

Isham is cagey when asked point blank whether he raised the complaint. First he says “no.” Then he says he knows who complained but won’t say whom. Then he just dodges the question completely.

“You know what, I’m going to stay where I am with it,” Isham says. “I’m just saying I’m not going to get into it. It was very short lived, it wasn’t something that lasted, and that’s why I’m not willing to try to push it back out there again. It seems like too much.”

Raised on a dairy farm in Williston, Isham is a sixth-generation Vermonter who plows snow and sells real estate for a living. He won a school board seat in 2008 after going to the polls and seeing no name on the ballot — and spontaneously deciding to wage a write-in campaign.

He’s a baseball umpire and the father of four children, two of them still in Winooski schools. He ran for state representative as an independent in 2008 and lost.

Isham says he’s a political independent with friends on both sides of the aisle. He watches Fox News and CNN, strictly avoids partisan mudslinging and, though he listens to him, thinks Glenn Beck can be “off the wall sometimes.”

He’s a Facebook fan of archconservative blogger Michelle Malkin because, he says, “You gotta listen to both sides.” Isham was a paid campaign worker in 2006 for Republican U.S. Senate candidate Rich Tarrant, but says that was more for love of politics than for Tarrant’s right-of-center agenda.

Rather than the Limbaugh-loving dittohead some in town suggest he is, Isham portrays himself as an independent public servant fed up with all the political bickering.

“I read the rants and raves on Craigslist,” Isham says. “You’ve got Democrats in there badmouthing and calling names to Republicans. You’ve got Republicans slamming it right back. You gotta get off this name-calling.”

But some Winooski insiders claim it’s Isham who is spoiling for a fight. His fellow school board members may not know he had an isolated brush with the law in 1999, when he was charged with attempted assault for allegedly choking an 11-year-old neighborhood kid for taking his son’s bicycle. The judge dismissed the charge, but a police report says Isham became irate, rapping on the mother’s door and calling the boy a “fucker” who belonged inside.

Isham denies everything in the police report and says the whole incident was “a misunderstanding that never went anywhere. That’s why it was released or dismissed,” he says. He also says he doesn’t remember any of the details. For example, he recalls a male investigating officer when the police report suggests it was female.

Before memories of the recent controversies start fading in Winooski, school board member Jean Szilva last week requested reopening the discussion about how the district should deal with sensitive topics in the classroom.

Giving a handful of parents the power to block an entire district from seeing a presidential pep talk — or an opinionated conservation video — gives individual parents “an incredible amount of power over what is presented to students or not,” Szilva says.

“You’d find someone in the community who doesn’t believe in gravity,” she adds. “That doesn’t mean it’s controversial, and that doesn’t mean that kids get to opt out of learning that if you drop something, it falls to the Earth at an accelerated rate.”

Szilva and others are also concerned that with both the Obama speech and The Story of Stuff conflicts, established school policy was ignored.

Winooski schools have a three-page policy governing controversial material that clearly spells out what parents and citizens should do if they object to material being taught in school. There’s a form to fill out, which goes through the principal and superintendent before the school board gets involved.

Acting Superintendent Mary Martineau confirms that school officials should have demanded such forms from the complainants before banning the Obama speech or warning teachers about The Story of Stuff, but admits that didn’t happen.

Isham’s response: Mistakes were made, but only because board members were under the gun to vote on the speech before it aired.

Did it make his conservative blood boil? Not at all.

“It’s a magnificent speech,” he says, “and it’s something all students should see.”