Irish Animation 'Wolfwalkers' Is a Hand-Drawn Feast for the Eyes 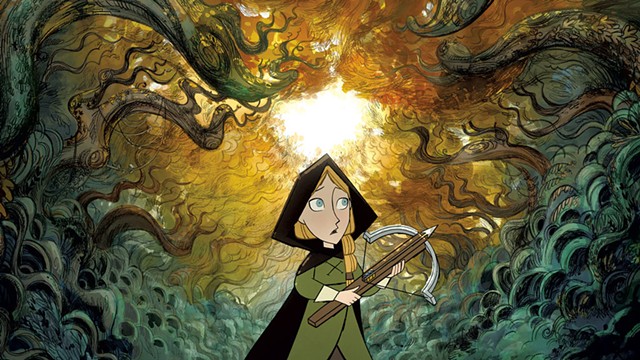 Our streaming entertainment options are overwhelming — and not always easy to sort through. This week, I watched Wolfwalkers, the fourth feature from acclaimed Irish animation studio Cartoon Saloon, which was profiled in a recent issue of the New Yorker. Suitable for older kids and up (there are some scary battles), this visually sumptuous adventure inspired by Irish folklore is currently playing at Montpelier's Savoy Theater and streaming on Apple TV+.

In 1650, the walled city of Kilkenny, Ireland, is under the thumb of Lord Protector Oliver Cromwell (voice of Simon McBurney), who vows to clear the surrounding wild woods for cultivation. Problem: The woods are full of wolves. Enter Robyn Goodfellowe (Honor Kneafsey), a little English lass who comes to Kilkenny with her widowed dad (Sean Bean). His job is to slaughter the wolves, and Robyn, no enthusiast of "women's work," is eager to help.

When Robyn sneaks into the forest with her pet falcon and her crossbow, she finds dangers she didn't bargain for — but also a new friend, the elusive, bewitching Mebh (Eva Whittaker). A "wolfwalker" whose spirit alternates between a lupine and a human body, Mebh convinces Robyn to change her attitude toward the wolf pack. But can Robyn convince anyone else?

If you love hand-drawn animation, you probably already know about Cartoon Saloon. Tomm Moore, who cofounded the company and codirected Wolfwalkers with his former schoolmate Ross Stewart, told the New Yorker he was inspired by Japan's Studio Ghibli and older Disney films such as Bambi. As the rest of the industry moved to computer animation, "I wanted to be a classical animator in the way of the old Disney movies," he said.

With none of the 3D "realism" we're now used to seeing in animated movies, Wolfwalkers has the gorgeous idiosyncrasy of a favorite picture book, rendering the world into its own visual language. The city and its Puritan inhabitants are composed of harsh angles and brutally contrasting colors such as black and fiery red. Seen from the exterior, Kilkenny's fortifications flatten into grotesque abstraction. Meanwhile, the forest is a dreamy realm of greens and browns, of roundness and fluidity.

Defying the wasp-waisted model of so many animated heroines, Mebh and her wolfwalker mother (Maria Doyle Kennedy) are all generous curves, too. With her tiny form and severely pointed chin, Robyn seems like a different species, a Jack Russell terrier dashing frantically to and fro while the wolfwalkers stand calm in their inherited, seemingly matriarchal wisdom. But then the forest gets under Robyn's skin, and she softens and discovers her own wildness.

On the level of script and story, Wolfwalkers lacks the clever dialogue and subtly fleshed-out characters that I associate with the best of Pixar or Studio Ghibli. While Robyn's father gets some interesting nuance, the Lord Protector is a Bible-thumping villain, and not a particularly memorable one.

It's never unclear where the filmmakers stand in this conflict — with the tree huggers and the wolves — but that conviction is also the movie's strength. Wolfwalkers becomes something truly special in the scenes in which Robyn and Mebh frolic in the woods, a portrait of female friendship that's rough-and-tumble and tender and free of typical distractions such as romantic rivalry.

The film is less compelling when it presents a traditional battle of good and evil, partly because of the flat antagonist and partly because any happy ending can only be a stopgap: The ultimate fate of wolves in Ireland wasn't a good one. For older viewers, that knowledge makes the sweet final scene especially poignant. For younger viewers, this could be one of the early animation experiences they never forget.

The Secret of Kells (2009; rentable): Cartoon Saloon burst on the scene with this Oscar-nominated adventure in which a ninth-century Irish boy aids the monks who are creating the illuminated Book of Kells, even as Vikings threaten their way of life.

Song of the Sea (2014; rentable): A girl fights to reclaim her identity as a selkie, or seal shape-shifter, while evading an owl witch in the studio's second feature based on Irish mythology.

The original print version of this article was headlined "Wolfwalkers"