Irene Assaults the Arts, Too, at Venues Around the State 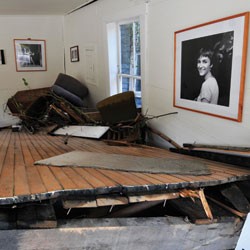 The reports rolled in from central and southern Vermont: flooded downtowns, washed-out roads, widespread debris and mud left by suddenly monstrous rivers. Beloved covered bridges destroyed. Three Vermonters confirmed dead, one still missing. The effects of Tropical Storm Irene — declared “not all that bad” in New York City — are dire in Vermont. They include damage at some of the state’s art venues.

While we can’t know about all of the likely devastation at this time, Seven Days learned on Monday of the following Irenic results:

At Studio Place Arts in Barre, which experienced serious flooding just last spring, the water rose again. “Having two floods within a few months is pretty challenging,” says director Sue Higby. “It’s pretty bad, though less so than in May. I didn’t know when I took this job as an arts administrator I’d be developing skills for a senior position at FEMA.” At least her humor is dry. Higby has become an expert at monitoring sump pumps, attacking muck in the overwhelmed storm drain out front and, clad in an orange slicker, directing traffic around the “pond” on Main Street. She gets through it with a philosophical attitude typical of resilient Vermonters: “It could have been worse.”

The Weston Playhouse, which just last week opened a world-premiere musical, Saint-Ex, sustained upward of $200,000 in damage, according to a story Tuesday in the New York Times. An estimated six to 12 feet of water from the West River flooded the lower level, which includes dressing rooms and the orchestra pit. Gone are the costumes, other gear and a grand piano, producing director Steve Stettler tells the Times. Like so many other buildings in the state, the playhouse does not have flood insurance. The show, however, is going on — in street clothes.

In White River Junction, students and instructors from the Center for Cartoon Studies, along with sympathetic neighbors, spent many hours Sunday through early Monday hauling out the contents of its Schultz Library as the nearby river rose alarmingly. They saved some 10,000 books and 4000 zines, according to CCS cofounder Michelle Ollie. “We’d just finished cataloguing them a month ago,” she says. “The majority of the books are graphic novels, reference and history books, rare instructional books.” The boxes were relocated to the old Telegraph Building, which houses CCS’ studio. It’s unclear whether the Schultz site can be salvaged.

The library was housed in the same building — a former fire station — as the Main Street Museum, owned by David Fairbanks Ford. While the quirky museum itself was spared most of the ravages of the White River, the lower level, including its two tenants and a museum storage area, was not. Six feet of water ripped through the businesses and essentially destroyed everything. One renter, weaver Susan Thompson, lost “a very expensive, computerized loom,” among other things, Ford reports.

He doesn’t think the infrastructure of his building is at risk, but, as with so many buildings in Vermont now, the cleanup will be massive. Ford notes that the storage area included items that had survived the historic flood of 1927. “Never one to miss an opportunity,” he quips with undampened wit, “I’m thinking of selling boxes of filth and bottles of flood water” as a fundraiser.

Executive director Nathan Suter doesn’t expect the pyramid-shaped sculpture to turn up in one piece. More than four feet of water gushed over the site, he says. “It would have been swept off its feet, then probably run into a tree.”

Two other sculptures were damaged: A wooden arm broke off of Tom Holmes’ “Star Bursts”; and Deborah Margo’s “Pemukkale Paramorph” — 35 salt licks atop poles planted in the high grass beside the river — lost 13 licks. “They were slowly eroding with the rain,” says Suter. “[Margo’s] intention was that this piece would change with the weather.”

Surprisingly, the “Habitat for Artists” structure — a 6-by-6-by-8-foot temporary studio erected by the entrance to the recreation path — didn’t budge. “There was water up to the doorknob,” Suter says. “But it’s really solid where it was.”

Liza Myers had just arrived in New Mexico with a group of Castleton College students for the semester when she saw the pictures of flooded downtown Brandon. Her Center Street gallery, next to a small park beside the Neshobe River, was directly in the water’s path.

“I’m still shellshocked,” says Myers, whose husband, Jim, has been giving her regular updates from Vermont. “Fortunately, the interior damage is so much less than we expected.” The gallery, which occupies the building’s second floor, seems to be fine, she says. They had expected the basement, where the couple stores art and framing materials, to flood completely, but it didn’t.

“The exterior is completely ravaged,” says Myers. “The park is gone. The gas tanks are gone. Everything that was out back, and all the work I’d done.”

The water didn’t reach as high as her enormous sunflower painting, though, which has adorned the outer wall of Myers’ gallery since last year. And she reports that other Brandon galleries made it out unscathed.

The recently renovated basement of Montpelier’s Savoy Theater can’t seem to catch a break. Last May 27, backed-up storm water from record flooding became a “geyser,” in the words of owner Terrence Youk, that burbled up through the bar sink and left the stylish space coated in sludge. Successful fundraising enabled him to restore the basement, but then along came Irene. This time, wrote Youk in his e-newsletter on Monday, “we were better prepared and removed all the furniture and electronics well ahead of time.” The carpet was a loss, but the basement is already drying out, says Youk, who plans to reopen the upstairs theater on Wednesday evening, August 31.

The raging Mad River moved Birke Photography off its Bridge Street foundation — yes, near the bridge in downtown Waitsfield. Proprietor/wedding photographer Caroline Bargerstock could not be reached for comment before press time. But we’re guessing this is not a photo op that she — or anyone else in Vermont — ever wanted to see.

Everyone affected by Tropical Storm Irene will need a lot of support — from clean-up crews to cash — over the ensuing days, weeks and months. In addition to emergency-management resources, check the websites of the organizations and venues linked in this story for updates and info on how to help. Got other Irene-related reports? Let us know at artnews@sevendaysvt.com.