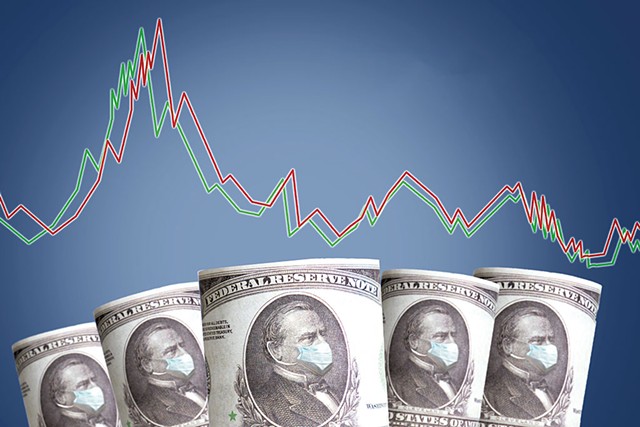 Not so long ago, the stock market was a common small-talk starter from barstools to locker room benches. "Hey, Bob, how's your portfolio looking?" you might say as you bellied up for a dirty martini or laced your Nikes for a round of pickleball. Bob would shrug and say something like, "Oh, you know. Up and down. Whaddya gonna do?" Then you'd both chuckle knowingly, secure in the belief that, even amid typical market fluctuations, things were going to be juuuust fine.

That, of course, was back in the halcyon days — let's call them "February" — when you and Bob could still hit the gym or the Thirsty Moose. Then came the coronavirus pandemic, banishing people to their homes, shuttering businesses, and tanking the economy and financial markets along the way.

Now, for poor Bob and millions of Americans with a vested interest in investments, the Dow, Nasdaq and S&P 500 have basically become four-letter words.

But just because your 401k suddenly looks more like 41K, there's no need to panic. OK, maybe panic for, like, a minute or two, but then take a deep breath — not around other people — and try to relax. Then, call your financial adviser. This is what you pay them for, after all. Though hopefully you don't pay them too much.

"You don't want the financial people walking off with your money," said Dan Cunningham, who is, actually, a financial person. "And they will do that very quickly if you're not careful."

Cunningham is the Princeton University-educated founder of One Day in July, an investment advisory firm with offices in Vermont, New Hampshire and Maryland specializing in financial planning that minimizes fees. He recently spoke with Seven Days to share some general tips and strategies for staying sane in the face of increasingly gloomy financial forecasts.

(Note: Everyone's financial situation is different. So, while Cunningham's tips are generally helpful for keeping a level head in trying times, none of what follows should be taken as actionable financial advice. For that, consult your own adviser.)

The worst thing you can do in any crisis, including financial ones, is make rash decisions based on fear. Cunningham urged ignoring financial news and paying less attention, not more, to what your investments are doing.

"Some of our wealthiest clients are people that haven't opened their statements in years because they're not tempted to try to outguess the market," he said.

Cunningham cautioned that going cold turkey isn't easy, especially for financial news junkies who are now cooped up inside. He suggested trying to go a week without tuning into "Marketplace" or "Mad Money" or looking at your stock market app. Then aim for two weeks.

"A lot of people report back that it's really freeing," Cunningham said. "It's really hard, almost like breaking an addiction. But it's amazing how that can help psychologically at a time like this.

"Looking at the stock market once a year is plenty," he continued. "You don't need to do more."

That's because there really isn't anything you can do about the market anyway, which brings us to step two.

"The critical thing is to focus on what you can control," Cunningham said. In a situation that rapidly feels beyond control, that bit of advice might ring shallow at first glance. But there are things within the normal person's power to manage — namely, financial fees.

"It is very common that fees are, in our opinion, too high," Cunningham explained, "whether that's from funds or from advisers or brokers themselves."

While you're stuck at home, Cunningham advises taking a hard look at your financial statements to figure out what you're paying in fees and how you might lower them. While you're at it, reexamine your asset allocation to make sure each component of your portfolio is functioning as it should.

"Asset allocation is a huge driver of return," Cunningham said.

Though it seems counterintuitive — maybe even a tad ghoulish — he noted that economic downturns are actually ideal times to invest.

"As an investor, you're trying to buy future cash flow for the cheapest price you can today," he explained. "The only way you're going to be able to do that is when there's bad news."

That's because bad news — such as a global pandemic — drives securities prices down.

"That's why people like Warren Buffett have done very well," Cunningham observed. "They buy securities when they're on sale and wait for the news to be better."

"It's very easy to say that, but it's really tough to do it," Cunningham admitted, acknowledging the human instinct to run for cover in hard times. "But what you really want to be doing is, on a planned investment program, buying into the assets that now are going to have higher long-term returns," he continued. "And bad news is what enables you to do that."

So does having a 401k with the proper risk protections baked in. Unfortunately, according to Cunningham, not all such funds are created equally; many come loaded with fees and, worse, substandard protections against downturns.

"After 12 years of a bull market, I think a lot of people forgot about risk," he said. "That's a really classic error in investment portfolios. Each part of the portfolio should have a purpose, and when the time comes to deliver the purpose, it needs to deliver."

That's one reason Cunningham generally recommends index funds to his clients over individual stocks. Index funds offer broad exposure to several companies at once, which creates diversification to spread out risk.

"Index funds are extremely democratic," he said. "You do not need to start out wealthy to become very wealthy by the time you retire." Nor do you need to have a high-paying job to succeed with index funds, he noted. "You just need to execute certain behaviors over your life well."

Such as, for example, developing the discipline to save money.

"A small amount of money saved in your twenties is going to be a large amount in your seventies," he pointed out.

Even so, Cunningham advises managing your expectations, especially in tumultuous times. He suggested looking at your statement today and assuming you have 70 percent of that money. That way, he explained, you're not surprised by dips, but if you end up with more money, it feels like a bonus.

"Reset your expectations in a crisis," Cunningham said. "It will start to relax you, and you'll stop worrying about the day to day."

After all, what's the point of a retirement investment if not to buy some peace of mind?

The original print version of this article was headlined "401 OK? | Investment adviser Dan Cunningham offers tips for staying sane in a financial crisis"