by Molly Walsh and Paul Heintz 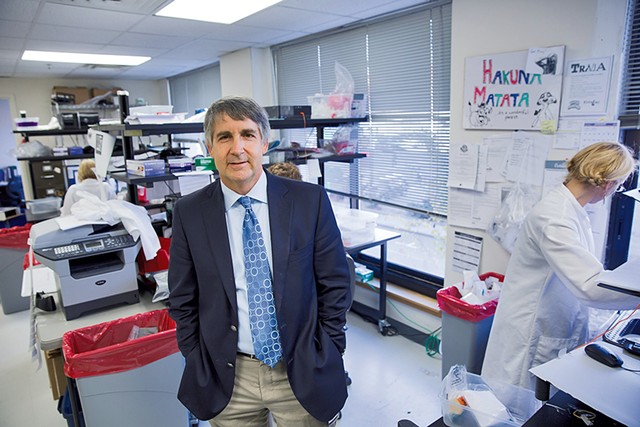 There were plenty of patients in the third-floor waiting room at Burlington Labs on Friday — despite the recent news that the Vermont-grown drug-screening company housed in Courthouse Plaza is on the verge of bankruptcy. There was no indication of trouble online, either; instead, the company sent out chirpy messages on sobriety strategies and promoted an addiction chat on Twitter.

But in Montpelier, a new story line was emerging about Burlington Labs. A filing with the Green Mountain Care Board revealed that the once-successful local company has been negotiating a Medicaid fraud settlement with the Vermont Office of the Attorney General that could total $6.5 million, potentially the largest of its kind in state history. There have been no formal charges, and the AG is offering few details — other than to say it is investigating Burlington Labs for "improper or incorrect" claims during 2015.

In their August 19 filing for an emergency certificate of need, the company's would-be rescuers told health care regulators that Burlington Labs faces fines and debts of $10 million and will go under unless it gets a lifesaver — quickly.

James Crook of Shelburne, the former CEO at IDX Systems medical software company, is the lead investor in the group that wants to buy the drug-testing operation. Crook and his lawyers urged regulators at the Green Mountain Care Board to fast-track a review of their proposed new company, which would be called Burlington Labs Acquisition.

Last Wednesday, Crook pitched the bailout to the board as a measure to help Burlington Labs' 180 employees, including 140 in Vermont, keep their jobs and allow opioid-treatment programs to continue to utilize the company's drug-screening services.

"To be able to do something that matters — that's what I spent my entire career trying to do," Crook told Vermont's health care regulators. Crook led IDX through its sale to GE Healthcare in 2006 for $1.5 billion. He has since worked as a private equity investor.

Crook's argument went over well with the board, which voted unanimously to do an emergency review, shortcutting a bureaucratic slog that could take nine months.

But the prospective purchase raises numerous questions. They include the propriety of involving Burlington Labs cofounder Michael Casarico in the new venture despite the fact that he was in charge of the company when it ran into trouble.

Casarico declined to comment for this story, but Crook maintains that the overbilling was not intentional but erroneous, echoing a statement issued by Burlington Labs last week.

Crook initially told the Green Mountain Care Board that Casarico would be on the board of the new company. But Casarico and other unnamed principals, described as "current owners" of Burlington Labs, would be more than advisers. They would have a 23 percent ownership stake in the new company, according to documents filed Friday with the board. Crook's investor group would own 62 percent and the University of Vermont Health Network would have a 15 percent stake.

Another issue: under what conditions the new company should be allowed to operate. Crook assured regulators that the new Burlington Labs will pay the amount due to the state, in full, but on Friday, the AG sent the board a letter urging it not to grant a permit until a settlement has been finalized. Ensuring that the government receives appropriate compensation for "improper or inaccurate claims submitted by Burlington Labs" should be a critical component of the review, wrote Jason Turner, director of the Medicaid Fraud and Residential Abuse Unit.

In a letter to the board earlier last week, the AG's office underscored the large scale of the Burlington Labs billing problem, suggesting it wasn't simply a minor bookkeeping error. The company's Medicaid claims reimbursement for the first six months of 2015 was more than the total the company had received in the five prior years combined, the letter stated.

Vermont's Medicaid payments to the company for all of 2015 totaled nearly $12.2 million, according to the Vermont Health Access Department.

With an infusion of capital from investors and a bank loan, Crook hopes to pay off the company's debt and break even as soon as 2017 — a goal that should be attainable if the the new entity meets projected revenues of $20.9 million this year and $23 million the next.

Many current employees would be invited to stay, and the company's network of a dozen or so Vermont walk-in labs would remain largely intact: A closed lab in Enosburg would reopen; a Barre lab would move to Montpelier; and a new lab might open in White River Junction. The company would close two labs, one in Massachusetts and one in New York.

Nationally, pharmaceutical and drug-screening companies are doing a brisk business off addiction recovery. Suboxone, used widely to get people off heroin and prescription painkillers, is among the most frequently prescribed drugs in the U.S., with sales comparable to Viagra's.

Drug screening plays a role in treatment: Patients are often required to provide urine samples to prove that they are not using illegal drugs and also to verify they are taking their treatment meds, such as Suboxone and methadone.

Both Medicaid and Medicare cover drug screenings, and the growing tab for the tests has triggered scrutiny by federal and state agencies. Last year, one of the largest drug-screening companies in the U.S., San Diego-based Millennium Health, agreed to pay the government $256 million to settle claims that it billed for unneeded tests.

Smaller cases around the country follow the pattern — the government settles rather than filing fraud charges, which could hasten bankruptcy and make it hard for the government to recover any money.

Al Gobeille, chair of the Green Mountain Care Board, speculated that this strategy could be in play at the Vermont Attorney's General's Office in the Burlington Labs case.

"Let's be clear here: If they file fraud charges against the company, they are never going to see their money," Gobeille said.

It's not up to the board to decide the Medicaid allegations, Gobeille emphasized, but the GMCB might place conditions on any permit, including full payment of the settlement before the new company can operate. The board could also restrict current leadership from moving to the new operation if there is an admission or finding of fraud, Gobeille said.

"You could say that whoever got the company there shouldn't be a part of the new company, the governance. I'd need the AG to say that they believe there was wrongdoing," Gobeille said. "Which I don't know they will say."

Other drug-screening companies do business in Vermont, including Dominion Diagnostics, which has a facility in Williston, and Accredited Drug Testing, with multiple locations. Both are headquartered out of state. Some of Vermont's largest addiction treatment providers, such as the Howard Center's Chittenden Clinic in South Burlington, do much of their testing in-house but use Burlington Labs for confirmation tests.

The company has served at least 2,000 Vermonters this year, a lawyer for Crook's investment group told the board.

"It's absolutely critical that we keep Burlington Labs alive so that we can keep Vermonters alive," Gov. Peter Shumlin said at a press conference last Thursday at the Vermont Health Department in Burlington. "I mean, we rely on their testing to help fight this battle that we're all engaged in together. So I'm really concerned about what's going on there ... If we lose Burlington Labs, we've got a real problem."

Health Commissioner Harry Chen said urine drug-testing services are essential in drug-recovery programs as well as when treating people with chronic pain. "And then it's also important in our corrections system, in terms of people who are released under conditions," he said at the same press conference. "So we need that infrastructure in Vermont, and clearly Burlington Labs has provided a significant proportion of that to date."

Burlington Labs has grown dramatically since Casarico and his wife founded it in 2006. Casarico is a recovering drug user and has made a practice of hiring many former addicts as the company grew from 11 people in 2011 to roughly 180 today. Offering same-day test results and a community-minded approach, the Casaricos grew Burlington Labs beyond Vermont. It has contracts in 20 other states and offices in Kentucky and Massachusetts. AGs in those two states would not disclose whether they were investigating the Vermont company.

Crook told the board that a friend contacted him in March to say that Burlington Labs was teetering on insolvency and needed half a million dollars to make payroll. He learned that as a result of the then-still-undisclosed Medicaid investigation, the state had reduced payments to the company. (According to the AG's office, the company's financial problems began before the Medicaid payment reduction and were not directly related.)

Crook recruited several other investors, including former IDX executives Christopher Powell and John Kane, to come up with a new business plan. The Medicaid investigation became public when he made his case to the Green Mountain Care Board.

As part of its filing, the acquisition group submitted letters of support. Burlington Mayor Miro Weinberger put in a plug to keep jobs downtown. The Turning Point Center, Spectrum Youth & Family Services, and the Howard Center all vouched for the company's important role in recovery.

"There are few employers willing to employ individuals with addictions and often criminal backgrounds," wrote Martha Maksym, executive director of the United Way of Northwest Vermont. "Burlington Labs has been a beacon for many to help them get back on their feet and to lead productive lives in our communities."

But the letters also included pleas from businesses that want the company to avoid bankruptcy for more practical reasons — so all the creditors waiting in line will get their money back.

Burlington Labs owes at least $3.7 million in unpaid bills, which the buyers have pledged to pay off.

David Epstein, managing principal at TruexCullins Architecture + Interior Design in Burlington, wrote that the firm was "heartened" that the acquisition group would maintain Burlington Labs' services and make good on those debts. His firm is out $105,000.

While the Green Mountain Care Board will work on a speedy review of the new company, its evaluation will explore many issues, Gobeille said.

He promised, "It will be very thorough."

Correction, September 1, 2016: A previous version of this story misstated the name of the United Way of Northwest Vermont.