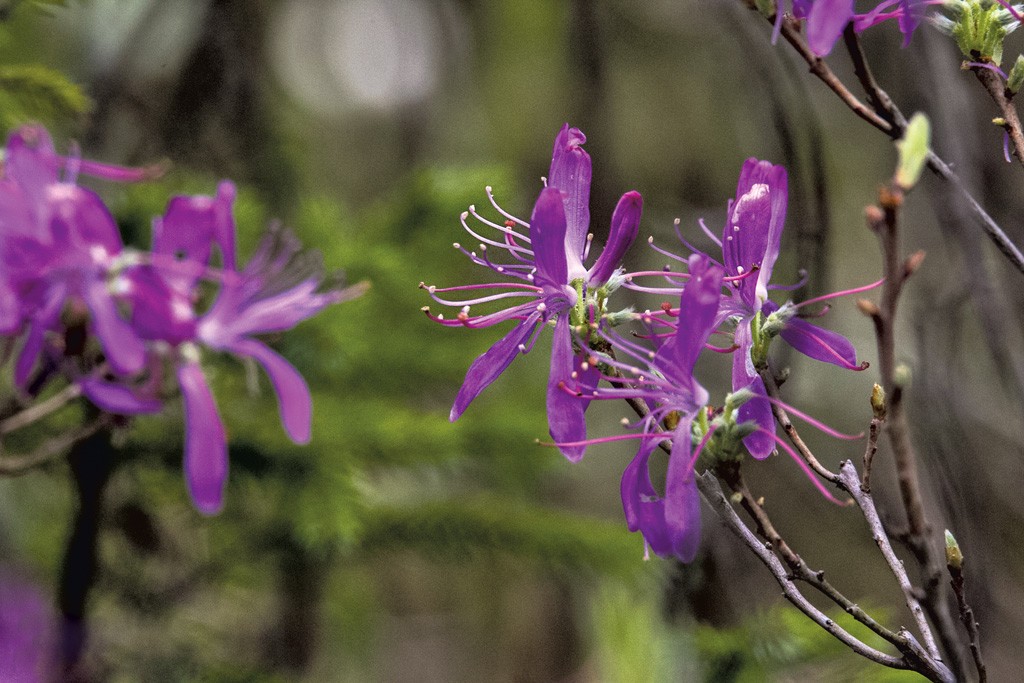 "Excuse me. I've got a fly in my mouth." Kent McFarland, conservation biologist at the Vermont Center for Ecostudies, politely pauses to expectorate one of the countless black flies that besiege him as he stands on the boardwalk at Mollie Beattie Bog.

Though probably the most numerous and noisome of all the organisms that dwell in this swampy, remote area, the black flies may be its least interesting. Look past them, and you'll find a fascinating ecosystem that seems entirely out of place in Vermont.

Even flatlanders know that Vermont is rich in forest, farmland and montane habitats. But the state's 9,600 square miles contain great geological, ecological and biological diversity, with curious and extraordinary niches scattered everywhere. In this new monthly series, Seven Days joins the researchers at Norwich's Vermont Center for Ecostudies to explore some of those off-the-beaten-track ecosystems.

For our first ecological excursion with VCE, McFarland suggested we visit this Northeast Kingdom bog, because it's unlike any other in the state. Nestled deep in the vast, federally managed Silvio O. Conte National Fish and Wildlife Refuge, the 70-acre bog was named for the first female director of the U.S. Fish and Wildlife Service. Beattie also served as deputy secretary of Vermont's Agency of Natural Resources; she died of brain cancer in 1996 at the age of 49.

The Champion Paper Company once owned the forested land surrounding Beattie's eponymous bog. In 1997, the company sold it to the federal government, which still permits responsible logging there. The roads that lead to the bog are lined with stacks of fragrant, recently harvested spruce.

In a nod to conservationism, Champion constructed a simple (and handicap-accessible) wooden boardwalk that extends some 200 feet into the dense peat mat. From the boardwalk, one can easily see most of the bog's unusual natural features, although most of the informational signs have long since faded.

Most likely created some 13,000 years ago by the gouging action of a passing glacier, the bog derives its waters not from the nearby Nulhegan River but from rainfall and snowmelt. As aquatic plants gradually spread out, died off and settled into sediment, the tannins released by their decay turned the bog's water more and more acidic. Soon a floating carpet composed mostly of sphagnum moss extended across the bog.

Today, that moss is dense enough to support the weight of thousands of black spruce trees that raggedly jut up everywhere, some more than 80 feet tall. McFarland estimates that some of them are 120 years old, and that the bog is so food-poor that younger spruces will "stunt themselves" for decades, waiting for older trees to die and free up valuable nutrients.

Like all of the bog's vegetation, the numerous black spruce and tamarack trees have evolved to survive in this challenging environment. So severely does it tax flora that one can easily identify the "line in the sand" that other native trees — birches, firs and other spruces — cannot cross, unequipped as they are to cope with the water's low pH. "There's balsam fir along the edge, but as soon as it gets too acidic, it gets outcompeted by the black spruce," says McFarland.

The acidic peat-soil is known as muskeg — a term usually reserved for similar habitats in Canada and Alaska — and everything strange and wonderful about the Mollie Beattie Bog can be traced back to its effects. Because the environment demands so much of its resident flora and fauna, those organisms evolve with a degree of specialization that renders them unable to survive beyond the bog's boundaries.

The bog abounds in various types of sedges, most of them thin and undistinguished grassy plants. Rare in Vermont, they're an important part of the bog's ecosystem. A showier type of sedge is the aptly named hare's-tail cottongrass. Each of its reedy stalks is topped with a fluffy, white tussock. The breeze is slight on the day of our visit (a pity: it's the only thing that staves off the black flies), but when it does rustle the cottongrass, the stalks' snowy sway is mesmerizing.

As a bog novice, I'm first drawn to the plant that draws the most attention to itself. Many of the flowers of the early-blooming Rhodora (genetically and linguistically related to the rhododendron) have wilted by the time of our early June visit, but plenty of its bright-purple flowers remain, standing out like neon signs. But for these and a few other small exceptions — notably the tiny, sky-blue spring azure butterfly — the bog's color scheme runs to gray-green. Noticing, much less identifying, its residents can be challenging, so I'm fortunate to have McFarland as a guide.

Even I, however, manage to spot the bog's flashiest resident. The insectivorous pitcher plant, usually associated with the southern and western United States, is ubiquitous here. Many of the plants are robust enough to stretch their leaves into two-foot-diameter rosettes.

The pitcher plant is nifty in an eighth-grade-science-class way, but there's much more to it, McFarland explains. In this highly unusual ecosystem, the pitcher plant creates its own unique micro environment.

"The cool thing about these pitcher plants — well, there's a lot of cool things about them — is that there's a whole little world inside that pitcher," McFarland says. "Inside the water, there's a mosquito that's specially adapted to survive that water. And there's a rotifer and other single-celled organisms that are breaking down stuff that falls in there. And there's an ant that feeds on a sweet liquid around the edge of the leaves. On top of that, there are two moths that only feed on that plant. One of them feeds on the leaves, and one of them feeds on the roots underground."

As he discusses the plant's curious biology, McFarland becomes more and more passionate. This is exactly the kind of thing that fascinates the self-proclaimed "nature geek," whose name and voice may be familiar to listeners of Vermont Public Radio's "Outdoor Radio."

Though he can wax rhapsodic about weird plants, McFarland is most keen on the winged inhabitants of the bog. Not birds — butterflies. Lepidoptery is his professional specialty, and he's tasked us with spotting, if we can, the rare jutta arctic. This small, brown-gray butterfly resides in bog habitats but has rarely been spotted south of Canada.

The larvae of the jutta arctic feed on the bog's abundant sedge, which grows in no nearby locales. In this way, the insect is effectively a prisoner of its own ecological niche. "That thing has been trapped here since its cousins went way north as the plants receded northward with the glacier," McFarland says. "They kept going, following that habitat, and it stayed here on its little spaceship. They're stuck here."

Armed with binoculars, a camera with a dual macro flash bracket, and undauntable optimism, McFarland trudges among the peaty hummocks in search of the tiny insect that's pretty much the same color as everything else in the bog. Soon enough, he spots a pair of them, twisting about in a midair mating ritual.

But the rookie pulls in the biggest catch of the day. As McFarland photographs the first pair, I notice another couple of insects alighting on a chest-high branch of a small black spruce. They don't fly off as I approach, and I soon learn why. This is a mating pair, and the creatures are so wrapped up in their entomological nookie that nothing disturbs them.

This is pay dirt for McFarland, who can barely believe our good fortune. So far as he knows, he says, no one has ever photographed a mating pair of jutta arctic butterflies. For the next 20 minutes, he and a Seven Days photographer invade the insects' arboreal bedroom to snap image after image.

Meanwhile, I muck about in the rubber boots I've been advised to wear, testing the resilience of the spongy carpet of moss. I have a much richer understanding of this peculiar ecosystem than I did an hour earlier, but nothing explains away its essential strangeness. A two-and-a-half-hour drive away, at roughly the same latitude, milkweed and sumac have pushed through the sandy soil of my backyard, which is visited by nothing more unusual than hummingbirds and skunks.

Hard to believe I'm in the same state.

This is the first in an occasional series of stories in which Seven Days joins researchers from the Vermont Center for Ecostudies in exploring some of Vermont's lesser-known ecosystems.

The original print version of this article was headlined "Bogged Down"