Into the Woods: A Brooklyn Family Settles in North Ferrisburgh

In a remote, wooded spot at the end of a winding dirt lane in North Ferrisburgh sits a house that is intimately familiar to people all over the country. That's because the Knoll House — as its designer, Bristol architect Elizabeth Herrmann, named it — was recently written up on Houzz, the home-design website that reportedly reaches 35 million viewers.

Despite its 15 minutes of fame, the house remains a secluded retreat, as this reporter can attest. On a recent sunny afternoon, Herrmann and Nina Griffin, co-owner with her husband, Dylan, showed me around while the Griffins' daughter and son, ages 5 and 3, teased each other and watched television. Sneakers the dog followed the tour closely.

"Knoll" refers to the land formation, not the well-known design company that sells iconic modern furniture. But those products would fit comfortably into the house's design aesthetic. Nina, a writer and actor, and Dylan, a photographer, have a preference for white walls and clutter-free living. And while the couple recently launched an online magazine devoted to Vermont living, called State 14, Nina's heritage is part Scandinavian. She inherited her Swedish artist mother's taste for design as well as actual vintage items, including plywood-and-chrome barstools by Arne Jacobsen and fabrics by Josef Frank.

The couple purchased the undeveloped 10-acre lot in 2008 while they were living in Brooklyn, N.Y. It was part of a 70-acre, onetime sheep farm that the previous owners had subdivided into nine parcels. For a few years before the children arrived, the couple vacationed on the wooded property, setting up a tent on the natural knoll. The living room, the house's focal point, is now on that site; broad windows on three sides reveal fields and a pond through the surrounding trees.

Discussions about the house's design "started with the land," said Herrmann. Turning to Nina, the architect recalled, "You had done this soft edit [of the land]" based on the advice of Burlington landscape architecture firm Wagner Hodgson, which had designed a cottage nearby.

That helped Herrmann conceive of a structure that would blend with its environment. "We jokingly call it the stealth house," she said.

The home's eastern white cedar siding is stained a dark brown to match the trees, and the gray standing-seam metal roof merges with the leaves' shadows. The distinctive siding is designed so that corner edging is unnecessary; the shiplap boards wrap uninterrupted around the L-shaped house, as do the pencil-width reveals between them.

The Knoll House straddles the line between traditional and minimalist. Its pitched rooflines recall New England farmhouses, yet its form contains several cutouts — negative spaces that form the front entry porch and other outdoor living spaces that will soon be equipped with decks. Herrmann said these "bites" out of the otherwise simple, rectangular spaces "diminish the heaviness."

Inside are more combinations of modern and traditional. The double-height living room's end wall contains a single, large, upper-story window that's offset within its peaked wall space. The kitchen is designed with another large window in place of upper cabinets; storage and the fridge are off to the side in a hall-like pantry. Yet the staircase, which leads to a master suite and loft, is as traditional as stairs get: ash steps; plain, white-painted spindles; a flat wood banister. No floating risers or sculptural balustrades here, though these modern trends wouldn't look out of place.

The interior is 2,300 square feet — modest, but a huge upgrade from the 900-square-foot Brooklyn apartment the couple previously shared. "We had boxes stacked up everywhere," Nina recalls of their New York life. The Griffins moved into their Vermont home two years ago.

The shorter wing of the L leads down three steps to a playroom with a built-in bookcase, a guest room, and the children's room and bath. In each, windows are wider than expected and sit only a few inches above the floor, as if inviting occupants to step outside at any time.

The stairway window is square — few windows in the house are alike — and set surprisingly low to the landing; it frames a picturesque view as one ascends. Passing it, Nina commented, "This is one of the things where I'd wake up and say, 'Oh, Liz, thank you.'" 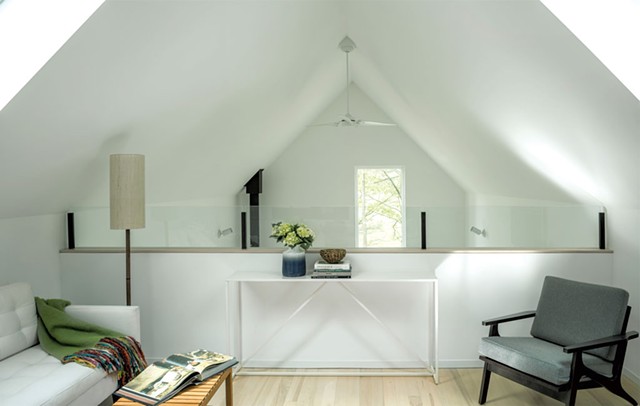 In winter, the homeowner marveled, the snow seen through all those windows merges with the white walls. Heat comes from the radiant concrete floor and a woodstove whose columnar exit pipe adds a sculptural touch.

Herrmann, who mostly designs residences, including a 430-square-foot "micro-house," commented that she doesn't like to repeat herself. "I love to design specifically for people and their land. If someone were to say, 'Can I have those house plans?' I would say, 'No.'"

The Knoll House fits its own site and light, she said: "It wouldn't work anywhere else."