Book review: In No One's Land 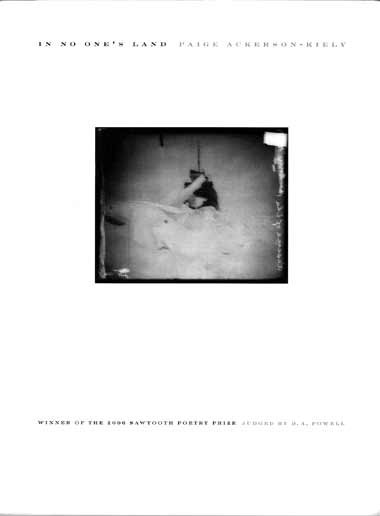 Paige Ackerson-Kiely is a brilliant bad-ass. The Lincoln poet won the 2005 Poets & Writers Writers' Exchange prize and the 2006 Sawtooth poetry prize and is on the faculty of the New England Young Writers' Conference at Bread Loaf this summer. Her first collection of poems, In No One's Land, introduces a poet with razor-sharp insight and a voice at once seductive, reckless and sad.

Despite its title, In No One's Land is far from a lonely dispatch from barren territory. It's more like a settler's journal - Little House on the Prairie set in the mountains and narrated by a chain-smoking Laura going commando. Ackerson-Kiely's free-verse poems typically start with an observation of the domestic or rural world, then shift into a shadow-world accessible only through the play of words or memory. This shift can be disorienting but also gives the reader a brief giddy sensation, like putting on someone else's glasses.

Ackerson-Kiely often introduces an image early in a poem and returns to it near the end, as in "Leaving." Its opening lines read: "I saw my dog with a limp bird / in her jaw and I knew the world / would end." The middle of the poem, a meditation on winter, prepares us for the return of the bird: "Feathers that are oily and full of mites / and snowing in, how you say, droves." The dead bird's feathers, transformed into snowflakes, close the poem and overlay a sense of narrative movement on what seemed at first a series of static insights. In this way, the dream logic of the poem also tells a story.

Worplay supplies many of Ackerson-Kiely's associative connections - a pun may extend into a wry conceit. "Look closely at all the fish we have to eat, their scales upon which the keys of our teeth may finally sing," she writes in "No, I've Had Enough." But often a line's unexpected turn leads to an act of violence. The prose poem "Instructional Lecture for a Liquor Store Clerk" advises the cashier to "lord over" the product, protected by a gun under the counter. Ackerson-Kiely writes, "When I said lord over, I meant benevolence. If you hit a doe with your car, and she crumpled into a ditch but her eyes were still open, her eyes open like a small child drawing a picture of dark roses, would you shoot her?"

This is one of several deer endangered in the volume, a recurrence that prompts the reader to identify these wounded animals with their wounded but defiant narrator. In "Deer Population at Night," when Ackerson-Kiely asks,"Who among us will take on their lean peril, / who has a face that is running away, / a soft hock to be engaged, please // leave me alone with my fear," the question is rhetorical - punctuated not with a question mark but a period. The narrator implies that she herself will take on their "lean peril" and sends a warning cry to deer everywhere: Scatter.

With these hunted or road-struck deer, the poems hint darkly at partially submerged acts of violence, often sexual. In one poem, entitled "Brother," Ackerson-Kiely writes, "Someone in distress. Some-one / yelling get him off me. // You might never get him off you." In the next poem, "Deer Population at Night," she describes the animals by the road as "bro. ken" and quickly defines the term as "brother, to know." Because of the previous poem, we're tempted to read that Scottish word for "know" as in the "Biblical sense."

The menace of potential violence is never far from the surface of these poems, but that is hardly their only emotional register. Ackerson-Kiely can be playful, wistful and melodic: "One by one mason jars are filled; / my beet-struck heart vinegared," she writes in "A Moment as Roscoe Holcomb," in tribute to the old-time banjo player. Likewise, in "An Old Recording," rustling newspapers are "like I love you whispered / over and over until / the awkward place which is neither / the ear or the throat itches terribly / and cannot be found with a finger."

The unscratchable itch lives, like many of the objects of desire Ackerson-Kiely summons, somewhere between the imagination and the viscera. To say that her poetic subject is inwardness would be understatement; to call it confessional would miss the point. It follows a trajectory from the personal to the private, the private to the hidden, the hidden to the unsayable.

In No One's Land is a personal archaeology of loss, one inscribed in the flesh like faded bruises and improperly set bones. Ackerson-Kiely's high lonesome verses pose unformable questions and answer them in the only way possible: crab-wise and tentatively.