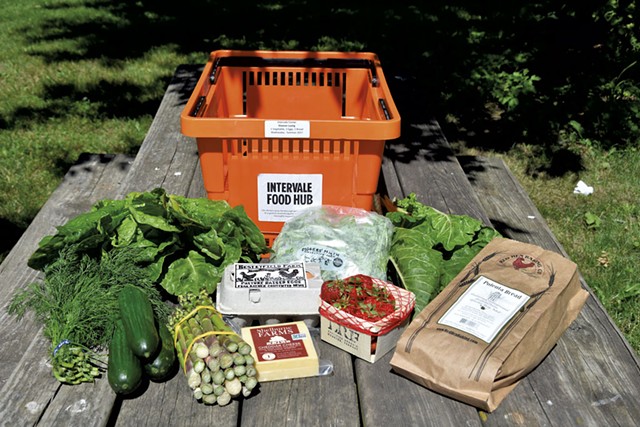 By the end of March, the Intervale Center in Burlington will shut down the part of the Intervale Food Hub program that consolidates local foods for weekly pickup or delivery to consumers. Travis Marcotte, the nonprofit's executive director, said the Food Hub will continue to sell some locally sourced products to wholesale accounts, such as the Vermont Foodbank and Sodexo US, which runs the University of Vermont's dining services.

Currently, members of the Food Hub select from bundles or pick items from a weekly list that might include locally raised mushrooms, vegetables, dairy and meats; Vermont-crafted tofu and tempeh; or seafood fished sustainably in Alaska by a Vermont-based fisherman.

When the program launched 15 years ago, the Food Hub delivered orders to members' workplaces, such as the UVM Medical Center. Home deliveries started in 2017. During the pandemic, demand skyrocketed, but it has since settled down to about 230 member orders per week, Marcotte said.

In Marcotte's words, the original aim of the Food Hub was "to connect consumers and farmers in new ways and fill some of the gaps where small- and medium-scale farmers and food producers weren't necessarily being served well by [existing] infrastructure." The nonprofit's research showed that producers and consumers wanted more direct ways to reach one another.

A decade ago, when Tony Naples launched Starbird Fish, the Food Hub was critical to building his business, he said. It has remained a steady and significant account, bringing in about 15 percent of his total sales.

The recent email informing him of the program's end "was surprising and sad," Naples said. That news, combined with challenges selling through local retail outlets, is forcing Naples to rethink his operation.

"I will probably have to shift to direct-to-consumer [sales]," he said. "The Intervale enabled me to not do that."

The Intervale Center's decision reflects its shifting priorities, Marcotte said. The nonprofit will focus on efforts to address food access and insecurity; on water quality and climate change issues that affect agriculture; and on farm viability through its business planning team, which works with about 150 Vermont farms every year.

"As an organization looking to strengthen the food system," Marcotte said, "it's just a question of: Where are the greater needs in our community?"