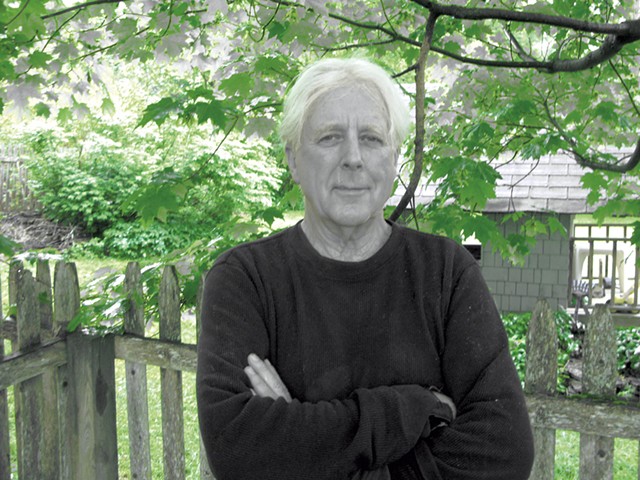 After a lifetime of photographing human faces and human activity around the world, Ethan Hubbard has found a new subject — the sky.

Hubbard, now 75, has come home to Vermont to stay. He's decided his travels to places including Nepal, Mexico, the American West, Scotland, Australia and many others are pretty much over.

But he hasn't put his camera down.

Hubbard's latest project, to photograph the sky and clouds in all weathers and seasons, was inspired by what he calls "the best book I have ever read in my life!" That book, by Tibetan Buddhist master Orgyen Chowang Rinpoche, is titled Our Pristine Mind: A Practical Guide to Unconditional Happiness.

Hubbard, a longtime Buddhist practitioner, says the book makes brilliantly accessible an essential meditation practice: clearing the mind of thoughts and resting in pure awareness. It uses the metaphor of clouds and sky to describe the nature of the human mind. And so Hubbard is using his considerable skills as a photographer to express that metaphor visually.

He regularly goes to Mount Hunger, a high, open peak with a wide view in the Worcester Range near Waterbury, to take pictures of the sky and clouds at various times of day and in various weather conditions. He's become captivated by the changing beauty of sky and clouds as perhaps only a photographer can.

"Clouds are absolutely beautiful," he said in a recent interview. "I'm surprised there aren't more books about clouds." 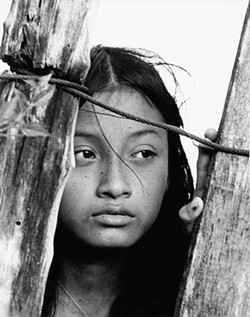 But there's another purpose to the book beyond pure visual beauty. Hubbard plans to pair photos of the sky in all its variety with quotations from Chowang's book defining "pristine mind" — and point to ways of accessing that mental state.

"I think the whole world has just gone haywire," Hubbard declared. "So I want to make a book about pristine mind."

He expects it to take a full year to photograph and assemble the volume. He will work with graphic designer Linda Mirabile of Montpelier, who has designed many of his books.

Hubbard has already published several collections of his photographs of rural Vermonters, women around the world and other subjects. Most recently, he compiled his photos of rural people from numerous countries, pairing them with quotations from ancient Chinese poetry.

The resulting collection, titled Wanderings, is compelling and beautiful. In one pairing, the beauty of a radiant young Maleku Indian girl smiling is deepened by a line from Hsieh Ling-yün, who lived in China in the third century: "A warm sun is unraveling winter winds."

Another photo shows a band of Asian travelers, tiny in comparison with the huge mountain landscape through which they're traveling. They are paired with another line from Hsieh Ling-yün with metaphorical overtones: "When you go deep, following a river to its source, you're soon bewildered, wandering a place beyond knowing."

Hubbard was inspired by his reading of ancient Chinese poetry to create Wanderings because, he said, he recognized his own life and many contemporary concerns in those old poems.

"Their laments, their ecstatic sighs ... I knew exactly what they felt," he writes in the introduction to Wanderings. "Their poetry was the universal map of what goes on between birth and death."

Wanderings is not for sale. Hubbard had 300 copies privately printed and is giving them away to friends.

However, another book he's working on will be available for sale. It's a collection of his photos combined with essays Hubbard is writing about his travels, the people he's met and what he learned from them. He expects to have that book, To the Very Paths of the Sun and Moon, published by next spring.

Nearly a half century of shooting portraits and landscapes has given Hubbard plenty of images from which to choose. He's shot more than 4,500 rolls of film, making portraits of tens of thousands of people. All of his photography to date has been in black and white, his medium of choice. He sees it as more revealing — somehow more essential than color photos.

"Something about the soul comes out in black and white," Hubbard said.

Greg Sharrow, senior folklorist at the Vermont Folklife Center in Middlebury, noted recently that Hubbard has the ability to make strong personal connections with the people he photographs, a skill that brings his photos alive.

"In this era when we see so much emphasis on division and separateness and differences, it's really important to have someone whose work so well expresses the mutuality and common experience of being alive," Sharrow said. "He hits that place where we all are fellow human beings, where our common humanity is recognizable." 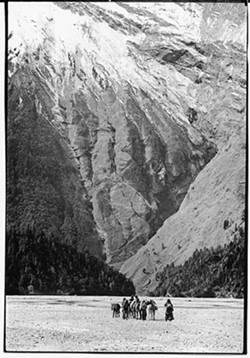 Jane C. Beck, the folklife center's former director, shares that view. In her introduction to Hubbard's 2004 book Salt Pork & Apple Pie: A Collection of Essays & Photography About Vermont Old-Timers, Beck wrote of his ability to photograph people "with great affection and understanding."

An exhibit of Hubbard's Vermont photographs will open in October at the folklife center.

Throughout his life, the photographer has found his subjects by taking a path less traveled. Turning away from a career in business, Hubbard came to Vermont from Connecticut in 1959 and taught school in Waitsfield for a time. In 1968, he went to work as deputy director of the Vermont Historical Society and began doing oral histories of Vermonters. At first, it was a way of escaping the tedium of the office, but one day Hubbard took a camera along and began taking photos of his interviewees.

"I fell in love with the ethos of those old Vermonters," he said. "They were resourceful, energetic, wise in ways that more citified, so-called sophisticated people weren't. I realized that this was what I wanted to do with my life."

And so he began to travel to remote places throughout the world. Wherever he went, Hubbard took along his camera and found ways to connect with the people he met.

In tiny villages in Nepal or Nicaragua or Bulgaria, he would go to the center of town and start bouncing a green tennis ball, he explained. Then he'd throw it high in the air and try to catch it. Pretty soon a few village children would come out to see what this strange man was doing. Then they would start catching the ball, and a game would begin. Eventually Hubbard would meet their parents, find a place to stay for a night or two, and begin making photographs.

Now, after 40 years of travel, he has returned to Washington, Vt., to settle down, make a home and sort out what it all meant.

Wanderings and its connections with ancient Chinese poetry is one summation of his work. Hubbard's upcoming book of essays and photos will be another kind of summation. And the future book featuring images of clouds and sky, expressing pristine mind, will take him in a new direction.

All his journeys have shared a thread of simple, heartfelt connection with the world and the people around him. In his gentle way, Hubbard quoted another line of third-century Chinese poetry, from T'ao Ch'ien: "I couldn't want another life."

The original print version of this article was headlined "Beyond Beauty"