Since poets and fiction writers abound in the 802, literary magazines do, as well. But when a full-color, handsomely designed art magazine appears, it's noteworthy.

Caddisfly Project, edited by artists Whitney Ramage of Middletown Springs and Karen Y. Chan of New York City, presents the work of 12 internationally connected artists in lush photographs. The sculptures, paintings, mixed-media works, translucent textual "love-letters" and fabric arts featured in the second issue were collected in response to the theme of "pressure." Synonyms of this broad concept are printed on the back cover, from "confinement" to "duress" to "call-to-action."

"The Caddisfly Project explores the ways in which artists are meeting the immense burden of this ungraspable moment," the editors state in an introductory note. "We're looking at the strain artists are under to be what the world needs."

Contributors were asked to send "studio outcomes": sketches, lists, drafts and experiments, in addition to finished work. This focus on the artists' processes, rather than products, echoes the magazine's name and concept. The caddisfly is one of nature's most creative specimens: Immediately upon hatching, it begins building a protective casing around itself, using whatever materials are readily at hand. A caddisfly will cloak itself with bitten-off pieces of plants, fragments of rocks or debris, even snail shells.

Anyone who's visited an artist's studio will recognize the similarity; artists tend to make use of anything and everything at hand — physical objects, as well as memories and dreams. Like the caddisfly's casing, art can function in a variety of ways — as a survival instinct, as armor and camouflage, as an aesthetic impulse. 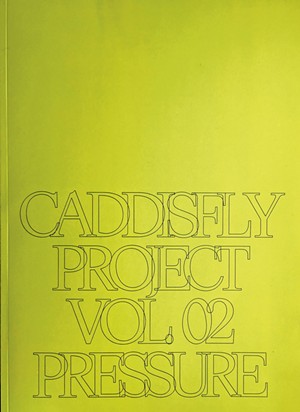 The contributions to Caddisfly Project Vol. 02 are every bit as varied as the creations of the magazine's namesake. Yorgos Maraziotis, based in Belgium and Greece, constructed familiar but unsettling sculptures — something that looks like an ottoman filled with motor oil, and a wooden bowl with honeybees piled at the bottom.

Jodie Lyn-Kee-Chow, an interdisciplinary artist born in Jamaica and based in New York City, contributed photos of several performance pieces. One shows a widow in a cityscape, mantled in black and clutching roses; another depicts a massive quilt as seen from above, with participants seemingly conducting a séance or perhaps just enjoying a picnic.

Many of the contributors have been in residence at 77ART, the art residency center in Rutland that Ramage directs. Although the two projects aren't explicitly connected, they cross-pollinate one another.

"A majority of the artists featured in the first two volumes of Caddisfly Project have spent at least a month in residency at 77ART in Rutland," Ramage says, "and that experience will shape their worldview throughout their careers, bringing a little bit of Vermont (and Rutland specifically) out into the world.

"Art is in the business of cross-pollination," she continues. "Our communities and artists here in Vermont benefit from contact with artists from elsewhere, and national and international artists learn a lot by embedding themselves in our community. I love that I can't decide who's benefiting more."

Ramage knows a thing or two about cross-pollination. For most of her career she's divided her time between Brooklyn and her hometown of Middletown Springs, where she's spent most of the past pandemic year immersed in her studio practice.

The inspiration for Caddisfly Project first hatched at the Massachusetts Museum of Contemporary Art in 2016, when Ramage and Chan met while in residence there and decided to create a platform for future collaborations. Graphic designer and sculptor Adriana Gallo, who has roots in Milan, Italy and New England, met Ramage while in residency at 77ART.

Ramage, Chan, Gallo and artist/writer Jessica Adams also contribute to Vol. 02, in the form of love letters printed as inserts on translucent paper. Halfway through the magazine, these letters provide a pleasant text break from the visual art.

"To write a love letter (or to make art) we will have to live with the lingering specter of the thing we desire, to coax it and communicate to it," the editors write in the introduction. "We hope to manifest our deepest longings, bringing nearer to us, in physical form, the visions that haunt us."

Each love letter takes a different form, from the more traditional letters of Adams and Ramage to Gallo's visual letter in the form of a handprint and a deliriously good incantatory poem by Chan, who is also a published poet.

Artists may appear to be hibernating during the pandemic winter, but this magazine offers evidence that artistic activity is just waiting, like the caddisfly, to reveal itself.