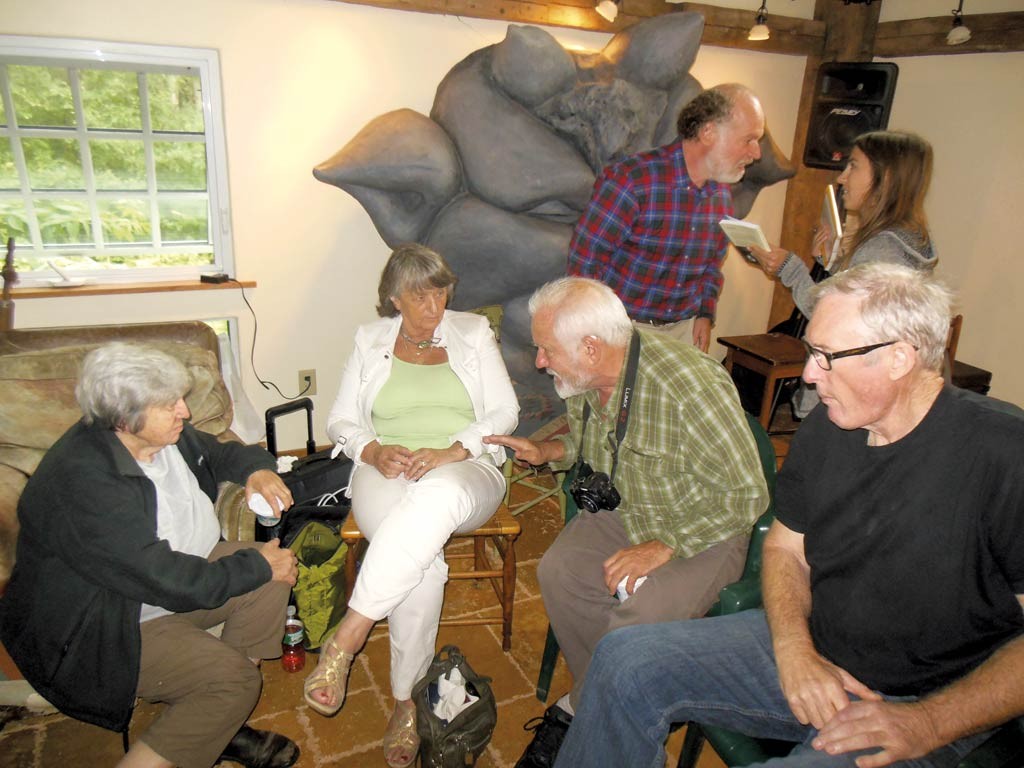 "Can anyone here give me a three-sentence definition of 'communalism'?" asked an earnest and befuddled audience member last Saturday.

"No!" replied a chorus of voices amid laughter and groans at the 40th-anniversary celebration of the world's most influential neo-anarchist think tank.

Apart from the group gathered on a Marshfield hilltop last Saturday, few people have heard of the Institute for Social Ecology; even fewer know that the late Murray Bookchin, a longtime Burlington resident, started it in Plainfield with a mission of fomenting a revolution to replace capitalism with a nonhierarchical, "communalist" utopia.

Although the discussions during the day were rife with references to theories and thinkers unfamiliar to the uninitiated, one panelist paused in her presentation on the philosophy of social ecology to remind the group: "We need to be able to speak to everyday people. Murray was very clear that we can't have a revolution without a broad-based movement."

The attendees themselves were surprisingly broad-based given the setting: a remote corner of one of the whitest, grayest states in the country. Despite jokes about ISE being a "gerontocracy," about a dozen of the 50 or so social ecologists on hand were under age 40. A few black and brown faces could also be seen in the transplanted and refurbished barn beside the home of ISE cofounder Dan Chordokoff.

The meeting hall had a cozy feel and a festive look on a cool and cloudy mid-August morning. Bread and Puppet-style mermaids perched on beams in the rafters, while an anatomically correct nude Neptune stood sentinel against one of the walls.

And the talk did occasionally move from the abstract to the concrete. At those moments it was evident that this obscure institute has quietly helped shape left-wing political movements in Vermont and beyond during the past four decades.

Social ecology has, for example, become the political lodestar of Turkish Kurdistan, Chordokoff noted. The leader of the Kurdistan Workers Party there is a devoted Bookchinite.

"As a body of ideas, social ecology has been very influential," Chordokoff said on the sidelines of one of the sessions. "The impact of its ideas belies the institute's small size."

Chordokoff, once a Goddard College student and now a retired professor, noted that ISE had begun organizing against genetically modified organisms in agriculture 15 years prior to Vermont's recent enactment of the nation's first GMO-labeling law. Right from ISE's beginning, Chordokoff added, solar and wind power were integral to its stated aim of creating "a moral economy that moves beyond scarcity and hierarchy, toward a world that reharmonizes human communities with the natural world, while celebrating diversity, creativity and freedom."

Social ecology, as delineated in Bookchin's many books, has played an important, if generally unacknowledged role in the formation and evolution of the movements against nuclear power and corporate globalization, Chordokoff said. Bookchin's critique of Marxist ideology and his advocacy of direct democracy could also be discerned in the political and procedural character of the Occupy Wall Street movement.

Indeed, "all the young blood here comes from Occupy," Blair Taylor, a 38-year-old doctoral student in Germany, commented in regard to the makeup of the Marshfield conclave.

The institute is much smaller today than in its early years, when it was affiliated with Goddard and offered summer-long programs that attracted as many as 180 students. Financing has dwindled, and the institute now lacks a permanent home. Moreover, Bookchin's 2006 death left ISE without the charismatic, prophetic figure who had served as a political and philosophical guru to some of those participating in this year's version of the eight-day "intensives" that have replaced the institute's summer school. Despite its contraction, ISE remains "vibrant and relevant," said Taylor, a member of its board.

Younger activists can find inspiration in Bookchin's work and in the institute's educational activities, affirmed Negesti Cantave, a 23-year-old New York City resident who spent many days and nights at the Occupy Wall Street encampment in lower Manhattan. "What I really like about social ecology is that it's open-ended," Cantave, a Haitian-Jamaican woman, said in a panel discussion. "I feel welcomed. A lot of other ideologies feel closed."

It was clearly OK to challenge premises and ask disconcerting questions.

A suggestion of similarities between social ecology thought and Tea Party ideology triggered a lively exchange.

One speaker warned of "a dangerous theoretical alignment with the right."

"When the Tea Party talks about liberty," Cantave interjected, "they're saying they'll have liberty but others won't."

Bookchin was "very clear in his opposition to right-wing libertarianism," central Vermont author and activist Brian Tokar reminded the group. Channeling Bookchin, Tokar warned against "the embrace of individual freedom to the complete exclusion of the social dimension." Republican libertarians might be more accurately termed "private propertarians," he suggested.

"Sanders has done some great stuff," acknowledged Chaia Heller, an Amherst, Mass., resident who lived in Burlington in the '80s. But his socialist ideology is "fundamentally problematic," she added, because it's "hierarchical and authoritarian."

In a panel discussion, Heller proudly recalled her involvement in Baird's 1989 mayoral race against Sanders' ideological heir, Peter Clavelle. "There was a lot of improvisation, a lot of trial and error" in that campaign conducted under the banner of the Burlington Greens, she said. "It was one of the best examples of communalism. It wasn't a failure at all," Heller said of a contest in which Baird received less than 5 percent of the vote.

Social-ecological activists such as Baird had earlier fought the Progs over Sanders' support for major commercial development on the downtown waterfront. The park and the open space to its north are testament to the local impact of social ecology, observed Bea Bookchin, who was married to Murray Bookchin for 12 years and lived with him another 23. The Neighborhood Planning Assemblies that bring together residents of the city's wards for democratic decision making can be seen as another Bookchin legacy, Bea Bookchin suggested.

Now 84, Bea Bookchin remains engaged in Burlington politics and what she calls the effort to "start governing ourselves." Interviewed at the ISE event, she points to "the fight for local control, like with Burlington Telecom" as her current focal point.

Bea and Murray's daughter, Debbie Bookchin, remarked separately that her father moved to Burlington from New York City in the early '70s because "he saw in Vermont a place to begin to put his ideas of decentralization and direct democracy into practice." The town-meeting tradition was especially appealing to him, she added. In Burlington, Debbie Bookchin recounted, her father saw "the potential for realizing the best of what a small city could be."