Inspiring Projects to See, Hear and Play With at the Vermont Tech Jam

Not all tech ventures are about making millions and dominating the world. For every Facebook or Amazon, countless researchers, makers, entrepreneurs and artists are using technology to work toward more practical or altruistic aims.

For example, Dave Porcello, who founded and later sold the cybersecurity company Pwnie Express, has created a real-time internet privacy-leakage display. It simulates what internet service providers, cellular carriers and the government can see by passively monitoring your internet traffic.

Porcello, who's now an adjunct professor of cybersecurity at Norwich University, set up his display outside Burlington's Generator maker space during this year's South End Art Hop. It was part of an exhibit that drew attention to data privacy and digital security, curated by Julia Vallera of the VT Data Privacy Project.

Both Porcello and Vallera will be in the Emerging Tech Showcase at the Vermont Tech Jam, this Friday, October 19. While growing local companies exhibit at the event to recruit talent, Emerging Tech participants are showing off exciting and inspiring new work, raising questions about existing technology, and demonstrating the breadth of innovation and inquiry taking place in the Green Mountain State.

Read on to learn more about three other Emerging Tech projects.

Seeing may be believing, but Charles Morrow proves that sounds can be just as convincing as sights.

Morrow, 76, has had a wide-ranging career. Born in New Jersey, he taught himself Morse code at age 12; studied chemistry, music and ethnomusicology at Columbia College; palled around with Beat poet Allen Ginsburg, singer Art Garfunkel and artist Andy Warhol; wrote music; and was a composer and sound designer for films, TV and radio.

These days, Morrow divides his time between his Northeast Kingdom hideout in Barton, where he moved in 2006, and Helsinki, Finland. And he's now known for the soundscapes he produces through his company, MorrowSound. These "site-specific sonic illusions" run the gamut from soothing white noise for corporate boardrooms to immersive, multilayered sonic renderings of specific times and places, such as an 18th-century British prison chapel or, terrifyingly, the collision of the meteor that wiped out the dinosaurs.

Morrow has created installations for the Smithsonian Institution, the Pro Football Hall of Fame, the 2006 Winter Olympics in Torino, Italy, and the New-York Historical Society — not to mention countless hospitals and at least one castle. 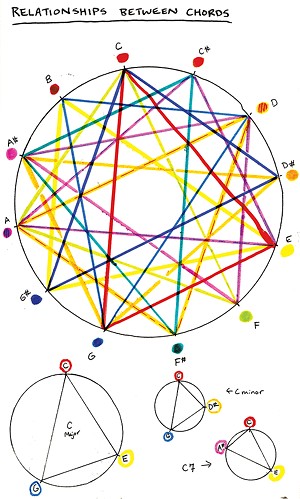 He says there's no formula for a successful sound experience; it all depends on context. In hospitals, for instance, familiar sounds can be soothing — to a point. "For a 14-year-old in an intensive care unit, the sounds of home can actually be upsetting," he explained. "They might want distraction more than familiarity."

And don't get Morrow started on running water: "Can you imagine anything worse than being stuck for hours in a waiting room with the sound of a gentle waterfall playing on an endless loop and no restroom in sight?" he asks.

Morrow is persnickety about every element in his pieces. He once spent days perfecting the sound of a closing Mercedes-Benz car door, and he set up a casting call to re-create the bustle of a 19th-century kosher market.

At Tech Jam, listeners will be able to sample some of his creations, including that Doomsday meteor strike, which Morrow approximated using a recording of a falling ballistic missile, the steady crackle of a slow-burning fire, and the dreaded sound of running water as the ice caps melt and the world as we know it ends. BYO paper bag for hyperventilation.

Earlier this month, MassMutual announced a $5 million donation to the University of Vermont to fund data science research, reportedly the largest corporate gift in the school's history.

True, the CEO is an alum, but the insurance company is interested in learning about health and wellness trends by delving into the data it collects from its customers.

MassMutual has already provided UVM researchers with information on 2.5 million people. The records include 600 variables — such as blood pressure, cholesterol level, genetic markers, smoking and HIV status — though they've been stripped of individuals' identifying information. The UVM team is looking for links between physical and financial health, for example, or how geography, social ties and macroeconomic events affect wellness.

Illustrating correlations in a data set that large is a daunting task, said Jane Adams, data visualization artist-in-residence at UVM's Vermont Complex Systems Center. Adams spoke with a reporter over the phone while preparing to deliver a TEDx talk in Springfield, Mass. "How do we visualize something that's 600 dimensions when we can only see in three or four?" she asked rhetorically.

Adams is not a data scientist; she has a bachelor's degree in graphic design and digital media, as well as a master's of fine arts in emergent media from Champlain College. She's part of the Complex Systems Center's interdisciplinary crew, which also includes professors of computer science, engineering, economics and psychology. Adams translates their research into plain English, and helps them illustrate it in an understandable way.

Her colleagues are appreciative. "The work we do often involves so much data that it won't even fit on a single computer, let alone a single visual or graphic," explained mathematics professor Chris Danforth. "As a result, it's difficult to convey in simple figures the relationships we identify in the data. A talented individual (like Jane) who combines artistic sense with technical expertise can make possible new and compelling forms of visual communication."

Adams can't bring her MassMutual work to the Tech Jam, but she'll be there talking with attendees about their own data problems and suggesting ways to illustrate them. She'll also display another popular Complex Systems Center project — the hedonometer, created by Danforth and Peter Dodds, which measures happiness levels in real time by analyzing posts to Twitter.

You're a frog collector. Someone broke into your house and stole all of your adorable frogs. You set off to rescue them through dingy sewers, carrying only your spear with which to pole vault over obstacles and fight off the thieves.

So begins Frog Snatchers, an action-adventure game for teens and adults designed by a group of five Champlain College grads who call themselves Too Tired Studios. A fuller description of the game can be found at tootiredstudios.com.

Inspired by titles such as The Hollow Knight and Undertale, Frog Snatchers is quirky, cute and funny. The frogs all have their own stories and powers. "Every frog is special," reads the site. "And damp." The sewers are gross, "full of garbage and weird moss and dead fish. And so wet. Oh that is slime. Oh it is moving it is alive no thank you." 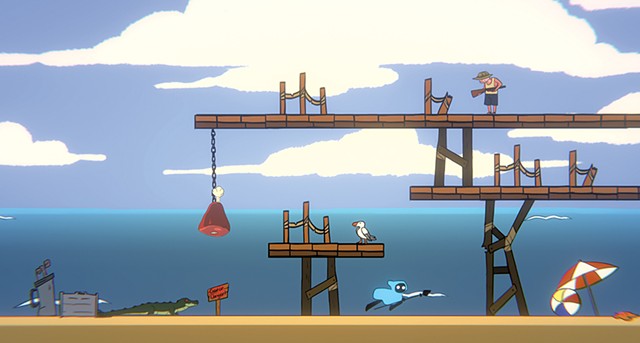 The group developed the game last year as a senior capstone project. The designers presented the concept in April at Champlain College's Game Studio Senior Show, and positive feedback from fellow students convinced them it could succeed in the commercial market.

They failed in their first attempt to raise $30,000 to develop Frog Snatchers through a crowdfunding campaign, but the team members said they learned a lot and are planning to try again.

Like their plucky protagonist, they're determined to complete their quest. Since graduating in May, the quintet has been polishing and refining the game while holding down day jobs waiting tables and doing contract work on other games. Said lead designer Luke Charland: "We're all committed to finishing this game, no matter the circumstances, no matter how long it takes."

They'll unveil its first "chapter" at the Tech Jam; attendees will be among the first people to play it. Said group member Amos Byrne: "We'll definitely be asking for any kind of feedback."

The original print version of this article was headlined "Imagination Stations"