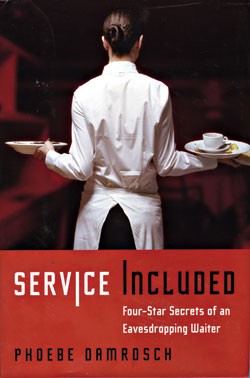 Many restaurant patrons think they're getting great service if their waiter remembers their favorite champagne, or serves from the left and clears from the right. But New York's Per Se, owned by virtuosic chef Thomas Keller of French Laundry fame, has higher standards. At this crème de la crème of fine-dining establishments, servers must know the names of the Vermont cows responsible for the restaurant's butter (Petra, Dyedee, Scooter, Lightning, Pansy and Lulu); the perfect temperature at which to store chocolate (62 degrees); and the exact size of Central Park, which the restaurant overlooks (843 acres).

It's not easy to get inside Per Se — if you're lucky enough to get a reservation, it'll cost you upwards of $500 per couple to savor Keller's famous salmon cornets with red onion crème fraiche, or his "oysters and pearls," butter-poached oysters topped with caviar in a tapioca sabayon. But even fewer gastronomes get hired to work at the place. Phoebe Damrosch, a former Burlington resident, counts herself among the elite. She serves up her experience in a new confessional memoir, Service Included: Four-Star Secrets of an Eavesdropping Waiter.

Damrosch came to New York to earn an English degree at Barnard; a career in food service wasn't exactly her plan. "I only began working in restaurants after I had exhausted quite a few other nontraditional ways of making a living," she explains. "I had written a Web page for a Filipino dating service. . . babysat for JFK's three grandchildren, and helped organize documentary film viewings at women's prisons," she relates. But when none of these panned out, she got a job "in a restaurant rife with clichés: roaches in the dry goods, mice everywhere, shady finances. . . and chefs with a penchant for throwing pots, pans and produce."

There, Damrosch moved up the ladder quickly, which she attributes to the chefs' reluctance to ask a white girl to mop up their spills. "I was the only busboy not named Mohammed," she dishes. "In most New York restaurants, the chef is Caucasian, the waiters are starving artists, the busboys are from Bangladesh, and the kitchen workers and dishwashers are from Latin America."

Unsurprisingly, the place went out of business, and things improved for Damrosch. Her next job was at a "chi chi" establishment that was good enough to draw attention from critics and chefs. One evening, she got the chance to serve Chef Keller and his friends just as they were in the process of hiring staff for Per Se. She introduced herself and later decided to apply for a job at the new restaurant. Keller remembered her, and brought her on for what would be an 18-month stint at one of New York's finest.

Don't pick up this book looking for gourmet gossip about Keller and his underlings — where the Chef is concerned, Damrosch expresses more reverence than vitriol. In his restaurants, she relates, even the lowliest busser is referred to as "chef." "It was an equalizer, a sign of respect for people's metiers," Damrosch posits. At another point, she describes Keller's "relieving the dishwasher" on a rough night. How many celeb chefs would deign to do the dishes?

Instead of focusing on the goings-on in the kitchen, à la Anthony Bourdain's Kitchen Confidential, Damrosch delves deep into life at the "front of the house." It just so happens that she was there for some interesting history: the boot-camp-style initial training period; the fire that closed the restaurant for months, less than a week after it opened; and six, nerve-racking visits by New York Times restaurant critic Frank Bruni, who ended up awarding the restaurant a perfect four-star rating. Damrosch was his server on four of those visits.

To illustrate her experiences as the only female "captain" at Per Se, without impugning the behavior of particular patrons, Damrosch makes use of a fictional couple named Mr. and Mrs. Bichalot — get it? The Bichalots allow the author to expose the wacky behavior of restaurant patrons who mistakenly believe that dropping up to $20,000 on a single meal entitles them to whatever they desire — such as the hundred-dollar pens the servers provide them to sign their credit-card slips. They might also notice a 20 percent "service charge" on the bill, which goes directly into the restaurant's coffers. Everyone at Per Se is salaried.

As the composite couple enters the restaurant, they carp about the lack of artwork in the Adam Tihany-designed dining room. What they don't know — and Damrosch explains to us — is that Chef Keller disallows anything that might distract from his culinary creations. That means no art, music, wacky hairstyles on the waitstaff, or the wafting aromas of scented soaps, colognes and lotions.

When the Bichalots' salmon cornets arrive, they attack them with silverware instead of popping them into their mouths. Damrosch dubs the pair "challenged" — the backservers' derogatory term for "anyone who would eat an ice cream cone with a knife and fork." As they nibble on each dish in the chef's tasting menu, Mr. and Mrs. Bichalot express dismay at the foie gras: She is "repulsed by liver," while he tries it only after complaining about his high cholesterol level. Although she doesn't say it flat out, Damrosch implies that the highest form of restaurant flattery is putting yourself in the hands of the chef and sampling whatever he sends in your direction — with no reservations.

Readers in search of sauce will find some in Damrosch's descriptions of customers. Of the "rich and famous," she says, "Celebrities love to be allergic to things . . . as a server, it is hard to know what to take seriously. Will she really go into anaphylactic shock if she eats sprouts or an Indian spice?" Other items that purportedly endanger the glitterati: sugar, egg yolks, duck, pineapple and fennel.

In a chapter called "I Can Hear You," Damrosch relates strange incidents she witnessed in the line of duty. Some are funny, as the time she misheard a patron profess a penchant for "pot." As Damrosch rambles on about how she doesn't indulge herself, but thinks it's great that he does, he clarifies: "I said 'pie.'"

Many of the stories evoke tenderness or melancholy. In one, Damrosch relates how an elderly man feeds the entire tasting menu to his wheelchair-bound wife. In another, a woman eagerly receives a Faberge egg from her boyfriend only to find that it does not, as she anticipated, contain a ring. As he tells her how much he spent on the egg, Damrosch says, "She pretends to be moved, but I know that she is heartbroken." The ring shows up before the end of the meal, but the scene didn't leave Damrosch feeling giddy: "I wonder whether she will always think of how small and alone she felt when she opened the egg and realized that he would never know how to read her heart."

If this engaging book has a weakness, it's the number of pages devoted to the author's relationship with her boyfriend, Per Se sommelier André. The romance has quirky foodie touches — the lovers engage in pursuits such as judging which Big Apple restaurant has the tastiest bone marrow — but I yearned for more, juicy insider details about the restaurant.

Vermont readers will enjoy some Green Mountain references and in-jokes. Damrosch compares the cliques in the Per Se kitchen to those at Burlington's Edmunds Middle School, which she attended. And she has the inside track on Vermont agriculture. Prefacing the story of a trip she took to visit Jasper Hill Farm in Greensboro, Damrosch recalls, "When their cheese was on the menu at Per Se . . . [the farm's location] was posted in the breezeway along with a taste profile, and everyone found the name 'Northeast Kingdom' to be terribly amusing. If only they knew the truth — that the majestic name actually described one of the poorest, most untamed parts of Vermont."

Untamed might be a good descriptor for the author, too. She began dating her handsome sommelier partner when he was still living with an old flame, and despite Keller's strict rules, she added red streaks to her hair during her stint at the restaurant. Plus, as the "eavesdropping waiter" of the book's title, Damrosch isn't ashamed to admit that she listened in on customers' conversations. But who — other than Keller, that is — can blame her?

Overall, Damrosch offers up a colorful mélange of snippy front-of-the-house gossip and interesting insights about both the restaurant biz and human nature. In certain passages, her liberal arts education comes in handy as she points out discrepancies in the way customers tip women and men, and how kitchens in New York City hire by race. But Damrosch doesn't delve deeply into these issues. Instead, she rests there briefly and then moves on to the next anecdote, like a waiter alighting at table after table as she flits through a busy dining room.

I had a crush on the French Laundry Cookbook for ages, but considered it way out of my league, both in price and required skill. I stalked it in bookstores, ogling the glossy photographs in dark aisles and secluded corners where the only witnesses to my infatuation were other desperate faux-cook foodies who probably couldn't roast a chicken to save their lives and had to resort to drooling over centerfolds of gleaming striped bass, glistening gelée, and statuesque towers of perfectly peeled tomatoes. After canapés and soups, I grew impatient and stopped caressing each page. I flipped past pepper confetti, Gewurztraminer jelly, the sculptural soft-shell crab "sandwich," and the tasting of black truffles in search of a page that made me pant: the photograph of the five-spice lobster on which a piece of foie gras rested with one sweatlike bead of fat hanging, teasing, yearning to fall. Satisfied, I caught my breath, crawled out from my corner, and slipped the book back into place between its unworthy neighbors.