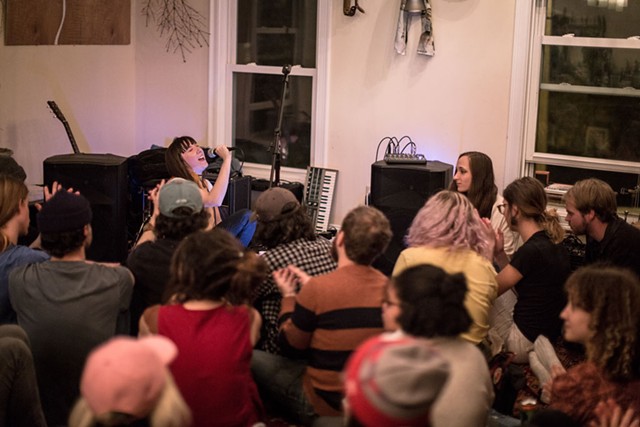 Maurice Sendak's 1970 picture book In the Night Kitchen depicts a young boy's bizarre, hallucinatory excursion to the mythical place named in its title. The Kafkaesque jaunt is, in typical Sendak fashion, not terribly lucid. It's more of a sensory experience than a good story, notable mostly for the author and illustrator's trademark visual style and vivid depictions of the messy joy of cooking.

The book was a childhood favorite of 24-year-old R&B singer-songwriter Guthrie Galileo — or Guthrie Stoltzfus, as his driver's license says. The Burlington-based California native is the architect behind the Nightshade Kitchen, an ongoing house-concert series presented in his Old North End apartment. Each iteration features a home-cooked meal as well as two or three local or regional performers. Though there's no practical connection to Sendak's story — no one dives naked into a giant bowl of batter or anything — Stoltzfus acknowledges that the immersive experience the book depicts inspired the kind of full-body, sensual experience he hopes attendees will have.

I dropped in on the most recent installment of the NK, which featured performances from ambient guitarist Alex Raine of post-rock band Entrance to Trains, avant-pop singer-songwriter (and Seven Days contributor) Amelia Devoid, and analog experimentalist Wren Kitz. The memorable session provided guests with a sumptuous banquet and intimate access to some noteworthy local musicians. Personally, it renewed my appreciation for simply listening and being present.

"Aside from music, food is one of the most effective ways of bringing people together," Stoltzfus said shortly after I arrived at his second-floor flat.

A spicy aroma flooded my nostrils as I admired the apartment's exposed rafters and vaulted ceiling. A friendly cat named Ives greeted me with a soft leg rub. Stoltzfus, along with sous chef Ryan Thornton and friend Christian Tuyishime, were hard at work prepping the space and the evening's meal: beef shank and tomato stew, roasted butternut squash and cauliflower, cucumber salad with tzatziki sauce, and a pan of baklava.

The more-or-less monthly event was born in the summer of 2016. Stoltzfus and his then-roommate, Billy Weaver, found themselves inundated with an abundance of produce collected at Weaver's family's Red Barn Gardens and through Stoltzfus' job with Healthy Living Market & Café. Amid the first haul were more nightshades (tomatoes, peppers, etc.) than the roommates knew what to do with, hence the series' name.

"[We had] a surplus of food and a space we wanted to use beyond a living space," Stoltzfus explained while peeling squash. "And we were just so in love with the Burlington music scene. All the resources seemed to be at our fingertips, so we thought, Why not?"

The Facebook event page, the NK's sole source of promotion, explains, "The chef's spoon is stirred with the same care and calculation with which the fingers strum a chord."

That's not to say that Stoltzfus intentionally pairs food with the artists he books, however. "We're not grasping for straws," he said, now dicing the squash. "The music and the food stand on their own."

Soon, guests began arriving in rapid succession. The pungent smell of spices grew headier as the revelers' collective bodies began to warm the space. What seemed like an ample room just 60 minutes earlier now felt increasingly tight, though not claustrophobic.

I recognized many of the 50 or so people, most of them in their twenties. They included local experimental musicians, sound engineers, drummers, club personnel, talent bookers and singer-songwriters from practically every genre. There were just as many unfamiliar faces, though all greeted me with a smile whenever I made eye contact. The atmosphere was the definition of convivial.

In certain focused listening environments, libations and other intoxicants are sometimes verboten. While the NK is by no means a rager, it's definitely not prohibitive. People drank from tallboys, mason jars and even directly from wine bottles. A bong sat on the countertop throughout the evening but was only utilized minutes before the evening concluded.

"It's not a party," explained Stoltzfus. "It's a listening party. It's all about appreciation. I think that can happen in whatever way people are enjoying themselves — as long as it's respectful."

Standing-room-only turned to sitting-room-only as Raine took a seat in the staging area — signified by a large board spray-painted with a silver "NK" insignia. I was surprised by how quickly and evenly everyone planted themselves into uniform, curved rows on the floor. Clearly, these folks had competent kindergarten teachers.

The group sat in rapt silence as Raine strummed out simple, contemplative licks on his electric guitar. His looped tones became a Jenga tower of atmospheric bliss. As he played, those whose eyes weren't transfixed on the performer bowed their heads in meditation, while others massaged and cuddled one another. The room conspicuously lacked handheld, glowing screens. There was nary a phone in sight — a remarkable feat for modern, easily distracted audiences.

During the first set break, attendees returned to their feet to stretch, pop outside for some air and dig into the meal, which Stoltzfus presented just after Raine's set. Hardly an all-you-can-eat smorgasbord, there was just enough for hungry folks to have a little bit of everything, leaving nothing but empty pans and bowls within minutes. Rather than an exercise in excess, which would undoubtedly have led to the dreaded "food coma," the meal seemed to both sate and energize the crowd.

Devoid took the stage next. Crouched on the floor with a laptop and synthesizer — the artist's typical starting position — she jockeyed between sobering emotional fervor and unhinged giddiness. At one point she joked, "Don't make fun of me if my voice cracks — I'm a growing boy!"

Kitz concluded the evening, though he did so without his typical amps, tape loops or vocal samples. Armed only with an acoustic guitar, he reminded me of something I'd almost forgotten: Beneath the layers of effects and reverb, behind the swirling masses of sound he usually synthesizes, Kitz is a folk singer. He debuted a bunch of new material, including at least one song so fresh it didn't have a title.

As I drove home afterward, I found myself lingering on the evening's quietest moments. I was grateful for the audience's respectful stillness, especially during Kitz' unamplified, sometimes barely audible words. It's rare to hear a performer's every sound and syllable with such clarity, even in public spaces deemed "intimate." I was glad to have those frequencies back in my life.