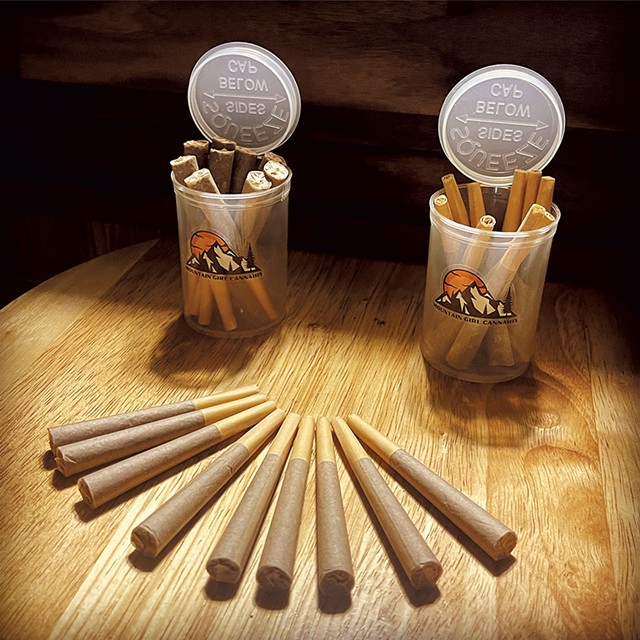 When Vermont's adult-use cannabis market opens on Saturday, October 1, so will the state's first nonmedical, recreational cannabis dispensaries. Mountain Girl Cannabis in Rutland will be among them. Seven Days took a tour of the store last week, just 10 days before its grand opening. At that time, picturing Mountain Girl ready for business took some imagination — and a little faith.

Once an auto parts store, the long-vacant space on the outskirts of Rutland's downtown was a construction zone. Sheets of corrugated metal destined for the ceiling lay in long strips on the concrete storeroom floor, flanked by power tools and fasteners. A large display case sat empty in one corner, partially covered by a drop cloth. The smell of paint and Sheetrock hung in the air, though with luck — and long hours — a more pleasant aroma will soon fill the room.

"We'll definitely be open on October 1," co-owner Ana MacDuff insisted. A wry smile creased the corner of her mouth, perhaps a tacit acknowledgment of just how much she and her husband and co-owner, Josh MacDuff, have left to do, from finishing their renovations to training their staff to stocking the store.

It's no surprise that the Rutland dispensary is scrambling to be ready for October 1, given that the state's rollout of the adult-use market has itself been something of a haphazard scramble from the top down. (See "Cannabis Cornucopia.") But when Mountain Girl does open this Saturday, it will mark the realization of a dream more than a year in the making for the MacDuffs, both 35, and the culmination of their decades-long relationships with cannabis.

For Ana, a native of Colombia and the store's majority owner, Mountain Girl represents an opportunity to get involved not only in cannabis entrepreneurship but also in advocacy and education.

"It's about destigmatizing use, yes," the former IT worker said. "But at the same time, it's making sure that folks know that this is a plant with medicinal properties. It is a substance that can be misused, just like alcohol or anything else. But everyone should have access to it."

Josh, a native of Rutland County and former insurance agent, called himself "a cannabis supporter since my teenage years. There's a lot of stigma around cannabis consumption and ... the laws and rules at the federal level," he said. "So part of me wants to promote that you can safely consume cannabis products and still be an active member of society."

Josh has personal experience with the stigma attached to cannabis. In 2006, during his first year at Green Mountain College, he was arrested for possession of the substance with intent to distribute. He accepted a plea deal, served four years' probation and did community service, after which his record was expunged.

Given his history, opening one of the state's first adult-use dispensaries is especially sweet.

"Ana was with me through that whole process," Josh said. "So it's kinda cool to evolve and take this step together."

Mountain Girl customers will enter through the front door at 174 West Street. IDs will be checked in a waiting area, after which a few shoppers at a time will be admitted into the showroom, where the MacDuffs aim to establish a warm and welcoming vibe, they said.

Whenever such spaces become legal, they hope to open a second-floor lounge where customers can consume cannabis. For now, under Vermont law, customers won't be allowed to consume on-site.

"Relationships are the most important aspect of this business." Ana MacDuff tweet this

As for the wares they'll offer on October 1, Ana acknowledged that's a "work in progress," citing supply shortages due to statewide bottlenecks in manufacturing and in product testing.

"We'll definitely have smokable flower and pre-rolls," she said. They're still sorting out their inventory of products such as edibles, tinctures and concentrates.

"It won't be perfect on day one," Josh said. "As much as you plan for everything, something's gonna come up, and you have to adjust on the fly."

To adapt in a rapidly changing business environment, the MacDuffs said they plan to lean on the relationships they've cultivated as Vermont's cannabis community has worked to become an industry.

"One thing we've learned is that relationships are the most important aspect of this business," Ana said, adding that she's networked extensively with growers and manufacturers in Vermont and elsewhere.

When he was an agent, Josh sold cannabis insurance to many local entrepreneurs who will soon be his colleagues. Those connections will be key to weathering the dispensary's early months, as the state's cannabis industry finds its footing.

"Eventually, we'd like to use the dispensary to do more within the cannabis industry, whether that's cultivation or manufacturing our own products," Josh said. "But for now, we just feel lucky to have the opportunity."

"Everything we do and have done happened for a reason and has brought us to where we are today," Ana said. "This is what we're meant to do."

The original print version of this article was headlined "What's in Store?"