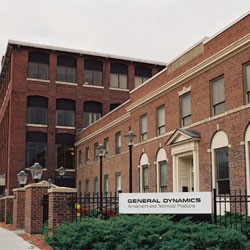 Getting into General Dynamics is not easy. The building that houses Vermont’s largest for-profit recipient of federal dollars and the world’s fifth largest defense contractor was designed with security in mind. Access to the four-story brick building on Burlington’s Lakeside Avenue is normally restricted to employees and visitors on official business. Numerous peacenik protests over the years, aimed at the company’s war machinery, have only solidified its closed-door policy.

But access to the Innovation Center of Vermont, which is the official home of the Armament and Technical Products division of General Dynamics, got a little easier after the Charlotte, N.C.-based defense contractor announced in October that it was pulling up stakes in Burlington and relocating its 450 employees to the IBM campus in Williston. How else could a real estate broker find a potential buyer — or tenant — for a space that has been generating more than $650,000 in property and equipment taxes for the city of Burlington every year?

Like the 77,000-square-foot Vermont Catholic Diocese headquarters on North Avenue, the Innovation Center is huge, especially for Burlington: It encompasses more than 167,000 square feet of prime commercial real estate in the city’s South End. Another parallel to the diocese property, which is currently under contract: This is the first time in decades that either the public or the press has gotten a look inside the once-secretive site.

Yves Bradley of Pomerleau Real Estate is the agent for both properties. Last week he gave Seven Days a tour of the Innovation Center, which is on the market for $31 million. The current owner, Detroit-based Lewiston Investments, will also consider a leasing arrangement with upgrades for new tenants, since there probably won’t be just one.

“The stuff we have to do for tenants is mostly cosmetic — building walls, taking out walls, painting — pretty easy stuff,” Bradley said.

The space occupied by General Dynamics is a different story. Built in 1894, the building originally housed the Queen City Cotton Mill. Large windows and a massive heating and ventilation system made it a desirable place to work at the time. It’s now listed on the Vermont’s Register of Historic Places.

Since General Electric moved into the space in 1948, the facility has undergone numerous renovations. In the last decade, it was retrofitted with state-of-the-art energy systems, including geothermal cooling, that make it one of the most energy-efficient buildings in the United States, according to the U.S. Environmental Protection Agency.

The building also features a Department of Defense-approved security system, with magnetic locking doors, key cards and dozens of internal and external security cameras that can pan, zoom, record audio and video and be operated remotely.

Aesthetically, though, the General Dynamics side of the building appears unchanged since the Eisenhower era. If local filmmakers were scouting for a location to serve as the headquarters of the Central Intelligence Agency, they couldn’t find a more suitable site.

A friendly but no-nonsense uniformed guard checks cameras and recording gear at the front desk. Visitors also have to provide a photo ID and sign a three-paragraph visitor registration card before being buzzed inside.

“The views from up here are incredible!” Bradley said as we surveyed the 15,000-square-foot fourth floor, and its panoramic view of Lake Champlain, downtown Burlington and the ill-fated Pine Street barge canal.

But, even with its 14-foot drop ceilings and tall windows, the GD interior feels dark and cloistered. The carpeted labyrinth of office suites, high-walled cubicles and beige filing cabinets was eerily quiet, despite all the employees working there.

The hallway walls were largely unadorned except for posters of GD products — Gatling guns, missile systems, antiaircraft ordnance and other lethal weapons, with gung-ho taglines such as “We all stand watch for the same reason,” and “Designed to fight, built to win.” There were also reminders to “shred unclassified documents,” “question security clearances,” “report coincidences” and “challenge strangers.” But no one said a word to us.

Downstairs, Bradley introduced Chip Myers of Gilbane Development Company, the building’s management company. He led us into a large, industrial-looking room with two huge black tanks that resemble brewing equipment, but are part of the geothermal cooling system.

About 300 feet below the steel plate we were standing on, a well pumps 53-degree water into these expansion tanks, chilling the building at little to no cost. According to Bradley, the building is rated 94.7 percent efficient. In the last five years, electricity usage has been cut by 32 percent; natural gas consumption by 60 percent.

Myers led the way to a control room to demonstrate how it’s done. On a computer screen, he digitally “walked” us through the building, showing how the software automatically opens and closes dampers to take advantage of the outside temperature and humidity, “like rolling down the windows in your car.”

Although the building has no other alternative-energy systems, it does have a 250-kilowatt backup generator that kicks on automatically if the system loses power. This feature is critical for maintaining General Dynamics’ impressive server room, which houses miles of computer cable.

Myers appeared upbeat about the changes. What does he think is the building’s greatest selling point. The in-house wellness center? The Lakeside Café? The 775 parking spaces? The Pentagon-approved security environment?

“The character,” he answered. “I mean, look at this place! It’s 115 years old. To have this here in Burlington is really a treasure, in my mind, and it should be occupied.”