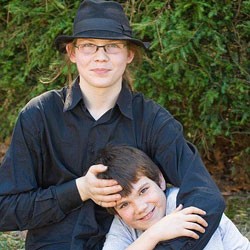 When 17-year-old Marble Arvidson went missing the day before Tropical Storm Irene tore through southern Vermont, it was easy to imagine that the Brattleboro resident was stranded somewhere on the wrong side of a washed-out road. More than two months later, the floodwaters have receded. Roads and bridges have been mended. But Marble is still missing without a trace.

The details surrounding his disappearance are agonizingly sparse. He was last seen on Saturday, August 27, at the West Brattleboro home he shares with two foster parents and another child. One of the housemates saw Marble answer the door at around 2 p.m., but didn’t recognize the visitor. Marble had made a date with his girlfriend for 4 that afternoon, so, before leaving with the visitor, he left a note for his housemates saying he’d be back in about 20 minutes. He never returned.

The rain began falling that night. By Monday, when Marble was reported missing, Brattleboro was in a state of emergency. Downtown had been flooded with several feet of water. Communications were down. Roads were blocked. Bridges were out.

Marble doesn’t own a cellphone. At six-foot-two and 165 pounds, he has shoulder-length blond hair, blue eyes and a fair complexion. His family says he was wearing black, including his favorite black bowler hat, the day he went missing.

By Wednesday, the Brattleboro Reformer had reported on Marble’s disappearance, but washed-out roads kept the paper from circulating widely. Marble’s mother, Sigrid Arvidson, and her sister, Trish Kittredge, a command sergeant major for the Massachusetts Army National Guard, hand-delivered the newspaper to all the surrounding towns they could reach. Kittredge organized the search for her nephew.

Rumors were already flying. The most pervasive, according to Arvidson, was that Marble must be stranded in hard-hit Dover. It didn’t take long for that theory to be quashed.

The Brattleboro police admit they’re grasping at straws. “We don’t have a lot of information on how he went missing,” says Detective Paul Beebe, who is handling the case. “We don’t know if he went missing because he walked away, [or] if he was kidnapped.”

The person with whom Marble left his house remains unidentified, according to Beebe. He could not divulge more details of the case, except to say the department has been looking for leads online — in particular, on social networking sites. Police have been working with the Vermont Fusion Center and have contacted the National Center for Missing and Exploited Children. Marble is not currently listed in the National Missing and Unidentified Persons System (NamUs), a database with which Beebe says his department is unfamiliar.

For her part, Arvidson began the hunt for her son right away. “I’ve searched pretty much everywhere in Brattleboro,” she says. “I’ve gone up and down the train tracks, up and down the riverbeds.”

Shortly after Marble disappeared, the grassroots search began. Kittredge set up shop under a tent in the parking lot of the Chelsea Royal Diner near Marble’s home. Arvidson manned an information booth at the Brattleboro Food Co-op. Family and community members have distributed flyers and canvased door to door.

In mid-September, Kittredge led more than 100 volunteers in a ground search of one square quarter mile around Marble’s home. She provided searchers with whistles and walkie-talkies and briefed them on dealing with anything they might find.

Search dogs joined the volunteers for a second big search the following weekend. Still, they came up short. “Nothing at all,” says Arvidson. “Not a hat, not a shoe. Nothing.”

Marble was due to begin his senior year at Brattleboro Union High School when he disappeared. Arvidson describes her son as “incredibly creative, really brilliant, charismatic.” He always liked building things and being outdoors, and he liked to fake-swordfight with friends.

But Arvidson admits she hasn’t been close to Marble over the last couple of years; he’s been in foster care since the ninth grade. “Marble has some needs that couldn’t be addressed with he and I living in the same house,” she explains. “It became clear that it was important to provide an alternative living situation.”

So Marble went to live with Pat Cataldo, a direct-care provider with Families First, and his wife, Sue. Marble and Pat Cataldo had known each other since Marble was 11. At the time, says Cataldo, Marble’s mother “needed help. She was a single mom. Marble had some issues. He’d had a rough childhood.” Cataldo became his mentor, taking him out for pizza, a movie or a ride in the car.

Marble lived with the Cataldos for a year and a half. It was good for a while, but not perfect: The Cataldos are homesteaders out in the Wilmington sticks. “It wasn’t the best place for a teenager,” Cataldo concedes. Marble wanted to be closer to his friends in town. He wanted access to a computer and TV. And the adults in his life agreed he could benefit from a more independent living situation. So he moved to the home in West Brattleboro.

Marble and Cataldo remained close. “I spent an inordinate amount of time with Marble,” says Cataldo. “I loved the kid.” Up until he went missing, Marble saw his mentor three or four days a week. They especially loved driving on back roads together, listening to Bob Marley.

The Thursday before he disappeared, Marble spent the night in Wilmington. Cataldo drove him home the next day, and they talked about the girl he’d recently started seeing. “She’s a nice girl, very intelligent,” says Cataldo. “They seemed happy together. They were grooving.”

They’d been hanging out over the summer with a group of friends, including the girl’s ex-boyfriend. Rumors have circulated that Marble left his house with the ex that Saturday afternoon, but, according to Cataldo, the boy has denied it.

On Sunday, Cataldo got a call from the foster family saying Marble hadn’t returned. Cataldo wouldn’t have worried — “He’d done that before,” he says — except that it was the weekend of Irene. “He wasn’t the type of kid not to call,” says Cataldo. “He checked in nearly every day. If he was aware of the flooding in Wilmington, he would have called.”

The Brattleboro community has rallied around Marble, but Arvidson says his status as a kid in foster care complicates the issue. “It’s difficult to be the mother of a missing child — that’s an understatement,” she says. “But there’s social stigma around aspects of our lives.”

That stigma, Arvidson believes, has led some in the community to assume he left of his own accord, even though Marble hasn’t been classified as a runaway. “There are people who say, ‘Don’t keep looking,’” she says. “People say, ‘He just went to Florida. He’s not lost; he’s not coming back.’”

Arvidson also worries that people perceive a missing 17-year-old boy differently than they would a girl. “It provokes a different image in the public’s mind,” she says. “I think it’s scarier for people when a girl goes missing. It has a different connotation. It’s sexualized.” But Marble is still a child, his mother stresses. “And we’re talking about a kid who struggles.”

It hasn’t helped matters that she has felt cut out of Marble’s life for years, Arvidson says. “Part of me feels like I’ve been missing Marble for a while.”

It was jarring, she says, to get a call from the Department of Children and Families informing her that her son was missing two days after she’d already begun searching on her own. “It’s a sticky situation, because, as his mom, I don’t have custody of him, so I’m not really included.”

That has hampered her search, as well. “I haven’t been allowed in Marble’s life to know what he’s been doing, who he’s been doing it with,” Arvidson says. “I feel really powerless.”

It’s hard to shake those images of post-Irene destruction, she adds. “He could be under six feet of river sand,” she says. “He could be pinned under a log. He could be scooped up by somebody and taken off.”

All Arvidson can do is pray for her son’s safe return. “I just know that whatever it is that’s hard for me, I have people around me,” she says. “Whatever he has gone through or whatever he could have gone through, he doesn’t have anyone around him. And that breaks my heart.”

As for Cataldo, he admits he’s fairly certain Marble is dead, either by accident or foul play. Like many teenagers, he says, “Marble did have bad judgment. He was impulsive and impressionable. He was easily manipulated.”

Cataldo couldn’t bring himself to participate in the volunteer ground searches. It’s not that he didn’t appreciate the effort. “I didn’t want to find his body, to tell you the truth,” he says.

For more details on Arvidson, visit findmarble.org. Anyone with information related to his disappearance should call the family’s tip line at 257-9111 or the Brattleboro Police Department at 257-7946, or email findmarble@gmail.com.