Tread carefully, Vermonters; it's a brave new world out there. Even as you walk down familiar streets, that other world is all around you, divided by factions and populated by spies.

And you might never know it unless you happen to notice an odd assortment of people on Church Street who are wearing blue and green and using the walkie-talkie app Zello. You may witness them furiously thumbing their smartphones while racing between virtual portals that you can't see. Unless you, too, have been recruited into Ingress.

Let's start at the beginning. Ingress is a global game application created by Google's Niantic Labs for Android in November 2012 and slowly rolled out over 2013. Offered to iOS users in July 2014, it's a free augmented-reality (ARG) massively multiplayer online role-playing game.

Like geocaching, Ingress works with a smartphone's GPS. Players seek out "portals" that may be landmarks, public works of art or businesses. In the spirit of the childhood game Capture the Flag, they can work individually or with a team to hack, or "capture," those portals to gain badges and levels.

The team aspect begins when the app is first opened. Players are prompted to choose an agent name and a side: Resistance (blue) or Enlightened green). Niantic Labs has manufactured a convoluted sci-fi backstory for the factions, but most players — at least in the Burlington area — seem just to enjoy the fun of tagging and linking portals as they perambulate.

Seven Days staffers encountered their first portal on Memorial Day: a black Mercedes van with Texas license plates and #NL1331 written on the back, parked across from the company's offices on South Champlain Street in Burlington. "Does anyone know what the hell that black van is still doing here?" called out sharp-eyed associate publisher Cathy Resmer early the following Tuesday. "Is it something to do with Bernie's announcement?" she asked rhetorically.

A search engine query later, we were down the rabbit hole, discovering the reddit community and Google+ chat rooms devoted to the game.

We learned that the van is a mobile Ingress portal site driven by a public, yet mysterious, figure: Niantic's Ethan Lepouttre. He's been traveling around the U.S. and internationally since at least early 2014, hosting events called "anomalies" in the Ingress community. 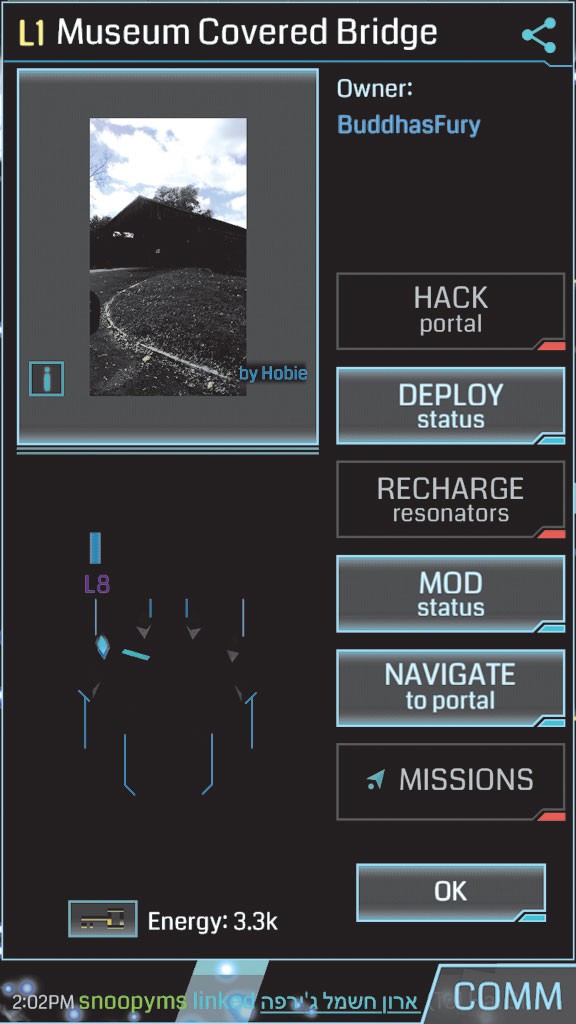 Lepouttre arrived in Burlington on May 25 for a locally organized cross-faction meeting of players at the Ice House Restaurant. Organizer Savannah Shover, aka Agent Glossy, a 30-year-old mom from the Northeast Kingdom, said the group expected only about 20 players. Instead, an estimated 60 to 80 people from Vermont, New Hampshire and Massachusetts showed up. It probably didn't hurt that Sen. Bernie Sanders would launch his presidential campaign nearby the following day.

Lepouttre disappeared shortly before we could tease out the purpose of the van. Bent on finding out more, we entered the world of the game. We used the Ingress app to turn our phone into a handheld map and GPS homing device that located the closest portal to our offices, Handy's Lunch. It looked like a green sparkle on the map of Maple Street. When we tapped the screen, a photo of the lunch spot popped up along with a claim that the portal was "owned" by Agent Dinobot, a City Market/Onion River Co-op employee.

When asked if he knew his café was an Ingress portal, owner Earl Handy gave an affirmative and delighted laugh. "But I didn't submit the place," he said. "My neighbor Dave told me we'd been added a couple of weeks ago."

We tracked down David Punia, aka Agent card54, a 61-year-old who volunteers at the American Red Cross blood-donation center in Burlington (also a portal). Punia entered the Ingress world about eight months ago. Like most players with whom Seven Days spoke for this story, he got involved via word of mouth. "It's an incredibly dynamic game," said Punia, a self-professed nerd. "Portals change hands; fields come and go all day long. Otherwise, it would be boring."

Ingress' appeal largely depends on whether and how much you are interested in games, mobile technology, science fiction, augmented reality and pretending to be a spy. What seems to link all current players, regardless of age and technical ability, is that they are early adopters, explorers and social creatures. All our interviewees mentioned the surprising connections and friendships they'd made both by playing Ingress and by interacting outside the game.

That outcome appears to have been a revelation to the game's makers. John Hanke, who currently runs Niantic Labs, told Making Games magazine last January that "the social interactions between people and the real world completely surprised us; the degree to which people enjoyed meeting up with people they didn't already know, we didn't expect that at all."

Hanke noted in the article that Niantic will develop the social media platform for its next game even before the corresponding app launches. That ARG, which will use a firstperson perspective, is called Endgame: Proving Ground, based on the YA trilogy by James Frey and Nils Johnson-Shelton. Built on the same platform as Ingress, the app will launch later this year; Niantic has already opened beta registration.

Inquiries to Lepouttre and a Google executive about future plans for Ingress — perhaps involving new platforms — were unanswered at press time. But in that same Making Games interview, Hanke admitted that integrating smartwatches and Google Glass with apps "was one of our interests when we started Niantic Labs ... It's definitely a possibility."

If Ingress sounds overwhelming but you like the idea of using technology to locate community art and historical sites, Niantic has another app for you: Field Trip.

Those looking for instructions on playing Ingress can find game assistance in the app itself, as well as in Google+ chat rooms and other forums. Access to a data connection or Wi-Fi hot spot is required.

Potential players concerned about safeguarding their privacy — and who isn't? — might take the advice of Brennan Martin, aka Agent SheepLordVT. "Before you get started," said the 40-year-old Burlington data analyst, "make a new Google account under your prospective agent name, so that you can keep your full name and other personal details to yourself."

Another agent cautioned against minors getting involved without parental approval and oversight. The game uses a GPS tracking and communications interface that records players' past actions and locations.

What is Google doing with all the location data it's collecting, anyway? Speculation on that point led Colorado's Schriever Air Force Base to ban ARGs such as Ingress. Locally, the Vermont Air National Guard Base has no portals on its campus that Seven Days could see, though there is one outside the entrance to the barracks.

While Ingress may raise concerns about the real-world consequences of play, it also gives people a novel way to interact with the world while playing with their smartphones. Jacob Oblak, a 27-year-old musician and Resistance agent, said playing Ingress inspires him to observe his surroundings in new ways. "Have you ever looked up at the buildings on Church Street, at all the gargoyles?" he asked. "No one ever looks up."