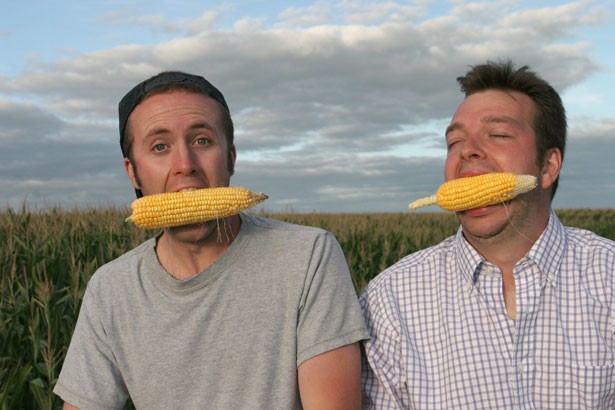 Christine Vachon produced indie hits Boys Don't Cry, Far From Heaven and Velvet Goldmine. The Valentine Bandit - actually, he or she prefers "Phantom" - is an anonymous party who papers Montpelier with red hearts every February 14. Curious folks can see them both at this year's Green Mountain Film Festival, which runs from March 21 to 30.

Vachon, an indie mogul of sorts who's written two books about making successful movies outside the big studios, will talk with GMFF General Manager Donald Rae on Sunday, March 30, at the Kellogg-Hubbard Library at noon. The fest organizers originally scheduled Vachon to speak at a screening of the surreal Dylan biopic I'm Not There - another film she produced - but, "She's a busy lady," says fest founder and Chief Programmer Rick Winston, who also co-owns the Savoy Theater. "She's very important." Vachon has a Montpelier connection, it turns out - her brother Brian Vachon used to work at National Life as VP of Communications and is also a former editor of Vermont Life.

As for the Valentine Bandit - well, he or she appears on screen, face obscured for a "Dateline"-style interview, in an eponymous short created last year by five U-32 High School students. Though it's no cinematic breakthrough, "Bandit" is a "very sweet little film," says Winston; it will screen as part of the Vermont Filmmakers' Showcase on Saturday, March 29. Also featured are David Raizman and Jim Ritvo's One Family: An Ethiopian Adoption and Bill Simmon's award-winning short, "Digital Pamphleteer."

A Vermont-made film screening separately from the showcase is Taking Root: The Vision of Wangari Maathai, a profile of the Kenyan Nobel laureate environmentalist by Alan Dater and Lisa Merton of Marlboro. It's still a work in progress, Winston says, because, "No sooner had Alan and Lisa finished the film than all the uproar in Kenya followed. They realized they can't put the film out now in the form in which we're going to show it." Film festivalgoers can get a sneak peek, too, at Vermont filmmaker Bess O'Brien's Shout It Out - The Voices Project Movie, which was filmed last summer in Jericho. Excerpts will screen on March 22.

Currently in its 11th year, the GMFF has "grown remarkably steadily over the last four or five years," says Rae. Last year, "slightly over 10,000" tickets were sold, and more weekday screenings were scheduled to accommodate crowds.

The festival is "curated," meaning that organizers choose the movies rather than calling for submissions. Winston and Rae scout out promising films at bigger festivals such as the ones in Montréal and Waterville, Maine. Starting in late summer, a festival committee of about a dozen people begins a "lengthy screening process" in which the movies are "winnowed down," says Rae.

"It's very hard to choose amongst our babies," Rae demurs, when asked to spotlight particular films. Though they won't pick favorites, he and Winston both want to call attention to certain screenings and events - for instance, a talk by cinematographer Tom Hurwitz, who's worked on documentaries ranging from HBO's "Cathouse" to recent episodes of "The American Experience" and the feature Ghosts of Abu Ghraib. The behind-the-camera veteran will discuss "how documentary style makes its way into feature films," Winston says.

The fest programmer also hopes viewers will check out a drama from Chad called Daratt ("dry season") that's "about revenge and reconciliation," he says. "It takes themes that are very much in the news and puts them into a very human form." Fräulein, a Swiss film about immigrants, explores "what it means to be without a home." Among documentaries, Winston notes Jessica Yu's daringly creative Protagonist, which profiles "four people whose lives unfolded in a way that was right out of Greek drama."

Among other docs on the festival docket are The Birthday, which explores a little-known side of life in Iran: The theocracy encourages male transsexuals to undergo sex-change surgery. The Business of Being Born makes a case for delivering babies outside the traditional hospital setting, while Daughters of Wisdom explores the lives of nuns who practice Buddhism in a remote corner of Tibet. King Corn is a Super Size Me-style hands-on doc in which two young men illustrate America's dependence on a certain staple by growing it themselves.

In the realm of fiction, the GMFF will see Vermont premieres of two dramas that could become arthouse hits when they're released later this year. The Edge of Heaven is new from Turkish director Fatih Akin, who made the in-your-face culture-clash romance Head-On; it won't hit New York screens till May. "We've kind of nabbed that quite early," says Rae. The Visitor is a movie about a professor who comes home one day to find two immigrants in his apartment, directed by Tom McCarthy (The Station Agent) and starring Richard Jenkins, the dad from "Six Feet Under."

Films like those are the bread and butter of the Savoy Theater, which shows indie, offbeat and foreign movies on its single screen all year 'round. But how has the theater fared since last March? Back then - as reported here on April 4, 2007 - Winston mass-emailed his patrons to survey them about why they weren't filling his seats for screenings of acclaimed - but downbeat - films such as Pan's Labyrinth.

This year, the Savoy reaped the nationwide success of the sunny comedy Juno, which "kind of paid a lot of bills," Winston says. But it brought its own problems: After four weeks, Juno was still "doing so well that when it came time for us to show Atonement, the people from Fox Searchlight said, 'You can't take [Juno] off the screen,'" Winston relates. "'It just got nominated for a bunch of Academy Awards.'" He had to keep Juno or risk compromising his relationship with Searchlight Pictures, a division of the Fox entertainment juggernaut. But this meant postponing the also-award-nominated Atonement. Like a jealous belle, Focus Features - itself a division of giant Universal - refused to offer the World War II romance under those conditions.

"The problem with this industry is, it's backloaded around November or December," Winston points out, referring to the practice of releasing potential award nominees late in the year to make sure Academy voters don't forget them. "All the serious movies come out then. We're a single-screen theater, so we're in quite a bind." Still, "This winter was definitely better than last." Winston also says last year's Sci Fi July series, a late-night weekly program of speculative classics, did well enough for a second go-round this summer. Get ready for spaceships on the big screen . . .