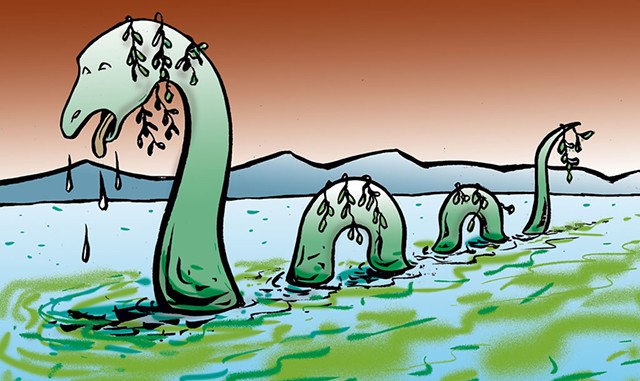 Don't let me ruin your fun at the beach, but there's yet more bad news about the likely effects of the climate crisis in Vermont.

A sobering warning is woven through a recent report about the water quality in Lake Champlain, Vermont's crown jewel. The climate crisis could create a serious drag on the huge, expensive, decades-long push to reduce the phosphorus that feeds weed growth and algae blooms, including the toxic blue-green algae that force beach closings and indicate a lake under stress.

Here is the line from the Lake Champlain Basin Program's 2021 State of the Lake report: "While management practices may help to reduce inputs, the increasingly intense rainstorms associated with climate change may release more phosphorus, possibly canceling out some gains made through pollution-reduction efforts."

What?! After years of effort to reduce phosphorus and hundreds of millions of dollars on lake cleanup programs, we're going two steps forward, one intense rainstorm back?

"Our fates are more closely tied to climate in Vermont when it comes to water quality than they are in any other place." Natural Resources Secretary Julie Moore tweet this

Here's why: In some years, just a few big storms contribute a breathtaking chunk of the phosphorus "budget" that scientists say the lake can take and still remain healthy.

These bigger and longer-duration storms carry more nutrients from the ground and from surfaces farther away because the ground gets saturated more quickly and can absorb less runoff. Droughts, another effect of global warming, make the ground harder and less absorbent.

Here's the bottom line: The bigger storms predicted due to the climate crisis will slow the state's 20-year effort to reach phosphorus targets and improve the lake's health. By just how much will depend on how extreme the weather gets, Natural Resources Secretary Julie Moore told me.

Moore said modeling for the phosphorus reductions will likely need to be revised to take into account more intense storms than originally predicted and fewer of the steadier, more predictable rains the original calculations included.

She added, "It feels really hollow to think, Well, things would have been worse but for [our cleanup] efforts. And yet there's a grain of truth in that, as well."

Here's how big a difference a major storm can make.

Take the Winooski River, the largest tributary on the Vermont side of Lake Champlain. On an average day, the river flows into the lake at about 2,000 cubic feet per second, which delivers about 50 kilograms of phosphorus, according to Matthew Vaughan, the Basin Program's technical coordinator. With a flow 10 times higher, as it is after a big storm, the phosphorus load can be 200 times more. That's because more nutrient-rich earth is washed into the river and because of the wider surface area from which nutrients are flowing.

"We call them 'hot moments' ... because they disproportionately send nutrients, pollutants ... to receiving water bodies like Lake Champlain," said Vaughan, who studied the impact of high-flow events on river quality as part of his doctoral research.

Last September, during a three-week low-flow period, the Winooski River delivered about 117 kilograms of phosphorus into the lake. A storm that followed dumped three times that load in a third of the time, about 359 kilograms over the next week.

In 2010 and again in 2018, about half of the phosphorus the river dumped into the lake for the year was tied to a single severe storm. And while it doesn't take an event as big as 2011's Tropical Storm Irene for phosphorus levels to go way up, take a look at what happened then. During the storm, Vaughan said, 180,000 kilograms of phosphorus from the Winooski River went into the lake in one day. That's more than the annual amount of phosphorus the river delivered to Lake Champlain during 20 of the 30 years on record, he said.

"That's why these storms are so important to water quality," he said.

What can be done?

Since we can't control the weather, Vermont is pushing to reduce the amount of nutrient-rich runoff that can reach rivers, particularly during big rains. One strategy is to "slow it, spread it and sink" runoff before it can get to the waterways, Vaughan said. It can be as complex as requiring a collection system for parking lot runoff or as simple as diverting your rain gutters onto spongier lawn and not down the driveway. It's also why wetland and floodplain restoration work has been important, since those lands help absorb heavier rains.

It's easy to point fingers at farmers. Agriculture is still the biggest contributor of phosphorus that reaches the lake, but it's also the land use where the biggest reductions have been made, accounting for 96 percent of the decreases in the past five years. That's according to a report published by the state Department of Environmental Conservation, which also put state spending on Lake Champlain improvements at $120 million over the same time period.

An estimated 920 metric tons of phosphorus entered the lake each year from Vermont, New York and Québec from 2001 to 2010, and the figure is cited in targeting goals. In 2020, Vermont's agriculture sector reduced its phosphorus load by an estimated 27 metric tons, according to the DEC report. Vermont's long-term goal is to cut its annual phosphorus load of 630 metric tons by a third by 2038. Some areas would need to make larger reductions than others, including problem spots such as Missisquoi Bay and St. Albans Bay.

"It's just going to take time, just like it took a long time to get to where we are now," Tebbetts said. "It's just a slog, that's all."

Moore added that "swapping out 10 acres of dairy farm for 10 acres of subdivision is not necessarily a win for water quality" because of the polluted runoff that flows easily from new streets, driveways and roofs.

Overall, the efforts so far have resulted in reaching 13 percent of the required reductions. Efforts in some areas of the lake have exceeded targets; others have fallen short. Moore said the cumulative effects will result in bigger percentage reductions in the program's middle and later years.

The water quality efforts got a big boost from U.S. Sen. Patrick Leahy (D-Vt.), the chair of the Senate Appropriations Committee, who included $40 million for water quality programs in Vermont in the recent infrastructure bill. He said progress has been slow, with "heartbreaking setbacks" but successes, too.

"I hope the difficulty of these tasks inspires others, as it does me, to celebrate progress, to focus on the long game and to work even harder," Leahy said.

But there's still what Moore calls the "curveball" that climate change has thrown.

"All of our work is in some way premised on a law of averages. We're designing systems that are meant to treat 70, 80, 90 percent of what you would expect to see in a year," Moore told me. "So to the extent we see irrational events, the practices we've put in place may not, or are unlikely to, achieve the results they otherwise would under what had been historical conditions.

"Climate change is really the biggest unknown and the greatest challenge to our work," she added.

Toxic algae blooms are not the only problem that closes beaches; high coliform counts that can sicken swimmers could also become more common, thanks to climate change.

In Burlington, the increased volume of water from heavy and sustained rains can overwhelm the pipes that carry sewer and stormwater to treatment plants. To relieve the flow and avoid having sewage back up into homes, the overflow mix is sometimes released, untreated, directly into waterways, triggering beach closures.

Like many cities' systems, Burlington's was built so that one pipe carries both sanitary waste from buildings and stormwater from streets to the treatment plants. During intense storms, the pipes can reach capacity, which is when the excess is diverted out the overflow pipes.

New York and Vermont have made progress in reducing the number of these discharge points. They've dropped from 87 to 31 around Lake Champlain since 1990. They've been cut from 11 to five in Burlington alone, part of the $52 million in upgrades to the city sewer system and treatment plants made decades ago.

Separating stormwater from sanitary sewage in the rest of the system would run a "cost-prohibitive" $75 million and "is not a viable option," according to Megan Moir, water resources director at the Burlington Department of Public Works. Instead, the city will continue to focus on reducing how much stormwater inundates the pipes during storms.

One example is the system of 14 rain gardens being built to trap and slow down stormwater near an outfall that discharges into the Pine Street Barge Canal and thus into Lake Champlain. Also helping: The state now requires property owners with more than three acres of impervious surfaces — parking lots and roofs — to come up with a plan to control their stormwater runoff. The city has similar requirements.

Some of the water quality projects that Burlington residents approved in 2018 can't easily be seen — disinfection upgrades at the city's three treatment plants, the replacement or relining of thousands of feet of sewer and stormwater pipes.

But the investments are paying off. The combined sewer overflows are less frequent and smaller than they were in the past. So far this summer, only one swimming area has been closed because of high coliform counts: Leddy Beach, last Friday.

Discharges from overflow pipes still occur. Two this summer at the Pine Street site were between 100,000 and 500,000 gallons, according to reports filed with the Department of Environmental Conservation.

As big as those numbers sound, they are a huge improvement from the estimated 170 million gallons of untreated sewage and stormwater the city released into the lake, the Winooski River and Englesby Brook every single year until the upgrades in the 1990s.

The higher-intensity storms from the climate crisis "are the most problematic" for the system, Moir said. And there's more work to do. The department is finishing a five- to 20-year plan to further reduce the combined sewer overflows. The less good news: The work won't come cheap. Moir predicts that "substantial" investments will be required of Burlington sewage ratepayers.

Maybe I need to put in a rain garden, too.