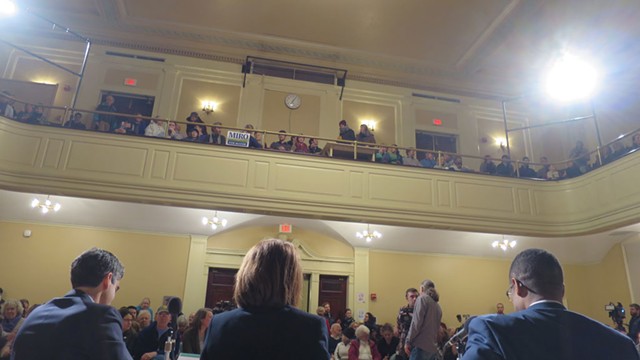 The Northgate Apartments cooperative should have been friendly turf for Burlington's two independent candidates for mayor, especially Carina Driscoll. The co-op is a bastion of affordability in a high-rent city, and Driscoll's famous stepfather, Sen. Bernie Sanders (I-Vt.), helped keep it that way.

When Sanders was Burlington's mayor in the 1980s, Northgate's existence was threatened by the prospect of sale to the highest bidder and redevelopment. His administration spearheaded a multiyear effort to preserve the co-op as affordable housing. A snapshot of Sanders now sits in the window of Northgate's community meeting room, where Driscoll had come for a Friday afternoon meet and greet.

But of all the people who live in the development's 336 units, only two showed up for the event.

An hour later, Infinite Culcleasure, the other challenger to incumbent Democrat Miro Weinberger, held an open meeting in the same friendly confines.

He attracted one person.

Granted, the weather was awful. And it's unfair to judge a campaign's vitality by one event. But these candidates share a fundamental goal of making Burlington a city open and affordable for all. Northgate was a natural fit. Still, almost nobody showed up.

The dismal turnout shows one of the difficulties of a community-based campaign: Can Driscoll and Culcleasure convince busy, working-class folks to take the time to participate? Can they energize city residents who, in the candidates' own words, feel excluded from the political process?

Twenty-four hours earlier and only a couple of miles away, Weinberger held court at a house event in an affluent neighborhood just north of Leddy Park. About 25 people attended, filling the open-plan kitchen and dining area. He held their attention for more than an hour of speech and Q&A, laying out his vision for a third three-year term in office.

Most attendees were Weinberger backers, but some were undecided. "I voted for Miro in the past," said Leslie Twitchell, a nurse at the University of Vermont Medical Center. "There are things I don't love that I'm not sure any mayor could fix right now." She indicated she was leaning toward the incumbent, but added, "I'm curious about Carina Driscoll."

At the heart of this contest is a question: How can Burlington be an open, inclusive community? All three candidates warn against turning Burlington into a "boutique city," as Weinberger puts it. All advocate a welcoming city for rich and poor, young and old, longtime Vermonters and New Americans. But they differ on how to get there. In interviews last week, the three laid out their respective visions of the city's past, present and future.

Weinberger boasts of straightening out the city's finances, which were a mess when he took office. He is eager to get a chance to "finish things we have started," including the redevelopment of the failed Burlington Town Center mall and the long-delayed Champlain Parkway, and to tackle a fresh round of challenges, including restoration of the unoccupied Memorial Auditorium and identifying a new use for the former Moran Plant. He also wants to make Burlington a net-zero energy city and work toward universal free childcare for the city's children.

At the heart of this contest is a question: How can Burlington be an open, inclusive community? tweet this

Driscoll and Culcleasure disagree with some city decisions, such as the sale of Burlington Telecom to an out-of-state private company, but their arguments are more about process than policy. Driscoll says Weinberger is too cozy with developers.

"There's a limited number of people the mayor consults with," she said, "and that leaves most of us feeling disengaged and disenfranchised."

Driscoll and Culcleasure preach a more inclusive government. Driscoll wants to foster community groups by providing small grants targeted at their specific needs — a gathering space, or money for childcare, or meals during meetings. Culcleasure is a community organizer who wants to effectively turn the city's power structure upside down, giving groups a say in city decision making.

Weinberger's mayoralty operates on the traditional template: crafting policies in city hall and then seeking public approval. He unabashedly favors a bigger Burlington. "I think we need to grow, and I think we can do it in a way that is consistent with our current character," he said. He believes most of the development should occur downtown, and that there's plenty of space to build more housing for all income levels, from affordable to high-end.

"I fear we're welcoming gentrification into our city," Driscoll asserted. "There is a glut of luxury apartments ... What we're finding in other cities is that people are occupying them as second or third homes."

Driscoll's campaign has had its share of hiccups. She has portrayed herself as her own person but has also embraced the Sanders connection when it seemed useful. That included gaining the endorsement of Our Revolution, a political organization Sanders founded, and running Facebook ads featuring a photo of her and the senator.

"I have chosen to include, in telling the story of who I am, the fact that I am the daughter of Bernie and Jane Sanders," she said. "But this isn't about going backwards. This is about people with progressive ideals who feel unrepresented."

She's had a hard time establishing herself as the progressive challenger to Weinberger. She earned the endorsement of the city's Progressive Party — but on a surprisingly close 116-84 vote over Culcleasure. She ruffled feathers with a tacit call for his departure from the race.

In fundraising, the man who would be Mayor Infinite has done better than even he expected: As of February 25, he had received approximately $10,500 in donations, more than half of which he raised in the preceding three weeks. He certainly isn't fading away.

"I think the press doesn't really know what to do with us," Culcleasure said, using the plural pronoun with a purpose: This isn't about elevating an individual but about remaking Burlington's power structure.

"We have articulated over and over again that we intend to keep working with each other beyond March 6," he said. "There are ballot issues we can bring to the city. There will be state races in November. We continue to meet, and we continue to talk about what's important to us."

Driscoll comes across as informed, confident and ... a bit conventional. She posits herself as a progressive but tries to appeal to voters of all stripes, while Culcleasure promotes a purer version of the progressive ideal. He may not win the election, but his candidacy could inject energy into his movement.

Still, this is a campaign, and Culcleasure's presence is a major plus for Weinberger because he's likely to divide the votes of the disaffected. Driscoll and Culcleasure have to convince a majority of Burlingtonians to reject a mayor who's made significant financial progress and launched major initiatives. That's a high bar. Have they cleared it?

The Burlington Free Press thinks so. It endorsed Driscoll in a brief editorial last weekend. Of course, students of history will tell you that the Free Press' endorsement has been the kiss of death in the mayor's race. Since 1981, the editorial board picked the winner only twice in 13 tries.

Perhaps Driscoll should decline the honor.

One of Vermont's renewable energy pioneers is giving up on his home state — at least for now. David Blittersdorf, founder of Williston-based AllEarth Renewables, is set to announce Wednesday that he is abandoning the Kidder Hill Community Wind project, a two-turbine installation in Lowell and Irasburg. Furthermore, Blittersdorf said he is not pursuing any more wind or solar projects in Vermont.

"I have a sense of urgency I've never had before," Blittersdorf said. He turned 60 last year, which sharpened his focus on fighting climate change. He's no longer willing to deal with a regulatory process that seems to him designed to limit and delay. "I've gotta pivot out of state," he said. "As a Vermonter, I hate this, but I have to do it."

Last June, the state Public Utility Commission rejected the Kidder Hill application, ruling that it lacked crucial information. The decision forced the project back to the drawing board.

At the time, Blittersdorf said he would come back with answers to the commission's concerns. But under Gov. Phil Scott, the panel has been unfriendly to big wind, and that made approval of Kidder Hill a long shot at best. "He got an effective moratorium on wind without having to label it a moratorium," Blittersdorf said.

He tells a similar story about solar arrays. "The cost of permitting has tripled, and the length of the process has tripled" within the last decade, he said, noting that solar in Vermont has gone into a deep decline since early 2017. So he will stop beating his head against Vermont's regulatory wall and focus his energies elsewhere.

Some consider Blittersdorf nothing but a profiteer, and they will applaud his departure. But he has a point: Vermont used to be a leader in renewable energy and is now falling behind. We will each have to decide if that's a Vermont we can be proud of — and a Vermont that deserves its green reputation.

He has occupied the post since 1992 and won a Pulitzer Prize in 2001 for a series of editorials supporting legalization of same-sex civil unions, a red-hot political issue at the time.

According to an internal memo, Herald and Times Argus general manager Rob Mitchell called it a "business decision" aimed at transitioning to "a new model for local newspapers." There remains little sign of this elusive "new model" beyond the same old, same old: keep on cutting, make remaining staff work harder and hope to create a sustainable business while turning out an ever-shrinking product.

When the Herald and Times Argus were sold in 2016, the new owners arrived with promises of a turnaround. So far, they've done little more than keep the lights on. The papers still don't have a presence at the Statehouse, four months after Neal Goswami left for WCAX-TV. Editor Steve Pappas had insisted that the paper would soon fill the position — until now. "I don't know that we will," he wrote in an email. "Clearly, we have let a lot of this session get by us. We've been hitting it scattershot with the reporting staff, soliciting op-eds and letters, and using editorials to highlight a lot of what has been going on."

The loss of Moats cuts especially deeply; he has been a beacon of quality through the papers' long, painful decline and an articulate voice of reason in Vermont's marketplace of ideas.

The original print version of this article was headlined "Inclusionary Visions"