Inch by Inch, Loan by Loan, Pete's Greens Makes Its Garden Grow ... Back 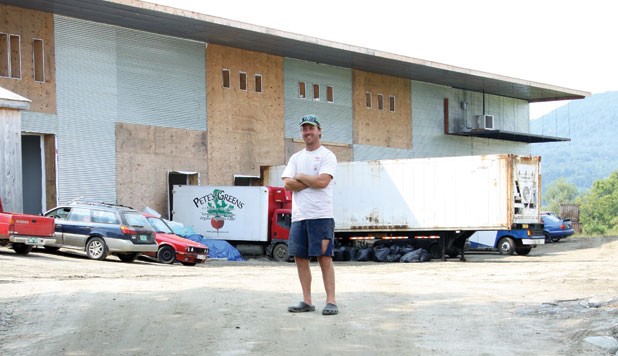 The ashes from the barn fire at Pete’s Greens were still warm when the donations started coming in. Within days of the devastating January blaze, Vermont restaurants, businesses and individuals started organizing fundraisers — and opening their own wallets — to help the Craftsbury organic vegetable farm recoup its losses: Those included all of Pete Johnson’s vegetable washing and processing equipment, plus coolers, freezers, tractors, supplies and $250,000 worth of uninsured meat and produce stored inside.

The Mad River Localvore Project organized an online auction with donated prizes that in just seven days raised more than $65,000 for Pete’s Greens to rebuild — $50,000 more than anticipated. Vermont musicians, including Page McConnell and Jon Fishman of Phish, rocked out at a sold-out “Hug Your Farmer” benefit show at Higher Ground. One hundred percent of the $40 ticket price went to Pete’s.

Government stepped in with giant checks, too. Gov. Peter Shumlin, who stumped for Johnson at the Higher Ground show, announced a $300,000 Community Development Block Grant for the farm, while the Vermont Economic Development Authority (VEDA) approved a $325,000 loan.

Pete’s farm accident, and the burning-barn image that illustrated it in local media, may have generated the most dramatic — and demographically diverse — outpouring of support in the history of Vermont agriculture.

Chalk it up to the Pete’s Greens brand. The farm has earned a loyal following, and Johnson himself has become a poster boy for Vermont’s local food scene.

“People recognize that Pete is innovating and helping lead the way for a new way that agriculture can exist in the state,” says Robin McDermott, cofounder of the Mad River Localvore Project. “He’s showing a lot of other farmers in the state how to grow on a scale that makes sense.”

But not everyone is sold on Pete’s. Behind the scenes, some have grumbled about the scale of assistance afforded to his farm, particularly since his barn and supplies were underinsured — the stored food, not at all.

McDermott says it was important to get Pete’s Greens back up and running because the Craftsbury farm is an economic engine for Vermont food producers. Sales at Pete’s Greens are close to $1 million, and, in 2010, the farm spent $250,000 purchasing food from other farms, most of them in the Northeast Kingdom.

“When his CSA shut down, it cut off a very large customer to several other farms and producers,” McDermott says. “It didn’t just affect Pete and his customers. I talked to farmers who were really hurt by that.”

That’s the same reason VEDA moved quickly — within nine days of the fire — to approve a $325,000 loan to the farm, says VEDA chief operating officer Steven Greenfield. “We did it quickly, understanding the urgency and importance of this business,” he says. “It’s integral.”

The farm has 20 years to pay back the low-interest loan to the Vermont Agriculture Credit Corp. (VACC), the arm of VEDA that lends to struggling farmers. Last year, Vermont farmers borrowed $18.6 million from the VACC to build barns and purchase cows and equipment. The loans range from $10,000 to more than $1 million, Greenfield says, making Pete’s Greens’ loan higher than the $100,000 average.

All that seed money is sprouting a gigantic new barn that will serve as the nerve center for an improved Pete’s Greens and as an incubator for the burgeoning local food scene in the Northeast Kingdom. On a tour of his 230-acre farm last week, Johnson showed off the barn as sweaty workers wearing rubber smocks washed greens in big chrome tanks, fishing them out with pool skimmers. Farm hands stacked black crates full of baseball-size tomatoes, while others hoisted steel shelving into place for what will become the commercial freezer. Outside, a hot sun shone on fields of carrots, parsnips and eggplants.

The new facility is a huge improvement over the 1950s-era, converted dairy barn that burned down, Johnson says. While the new barn’s footprint isn’t much bigger, it’s about twice the size because of the ceiling height. The old barn had 7-foot ceilings and a cooler that could accommodate 200,000 pounds of stored veggies. The new barn holds 400,000 pounds of produce. More importantly, 26-foot ceilings can accommodate forklifts, so machines — rather than people — can do the heavy lifting.

Even with its larger size, the structure is built to maximize energy efficiency. It has a double wall — exterior metal studs and interior wood studs — which is packed with cellulose insulation made from shredded newspapers.

The centerpiece of the new barn is an industrial freezer, three stories high and big enough for a full-size basketball court. Johnson sees frozen food as a growth area — for Pete’s Greens and the region as a whole.

“We built a freezer way bigger than our current needs,” says Johnson, showing off the room’s 43-inch-thick insulated walls. “There’s no commercial freezer space to rent around here. You have to go to Williston. Decades ago, there were freezer lockers scattered around these hills in the Northeast Kingdom. None of them is left. We’ll be open to leasing space in ours.”

The new barn affords other improvements, too. For the first time, Pete’s Greens will have an employee lunchroom, complete with showers and a washing machine.

For Johnson, 39, the outpouring of support was “wonderful and amazing, and also kind of a burden for me personally.

“It was hard to receive all that,” says Johnson, a Middlebury College grad dressed in ripped surfer shorts and Crocs. “It’s not in my nature. I guess I would have predicted there would have been some amount of that, but nothing like what happened.” He says he’s committed to paying back a portion of the $165,000 in donations to create a revolving fund that would support other agricultural entrepreneurs in Vermont.

Johnson concedes his insurance gap was an “oversight,” but notes that when a farmer fully insures his or her assets, which Johnson has now done, it cuts into a farm’s already thin profit margin.

“We’re in a business where if you do everything absolutely as thoroughly as you should, like insurance, there’s no profit left. Period,” he says. “The margins are small. Seasons are tough. Costs are high.”

To be sure, Johnson’s business took a hit from the barn fire. He had to lay off five of his 12 full-time workers for several weeks, and cancel the farm’s spring CSA share. When greenhouse veggies started popping up, he used his cramped house kitchen to wash and pack everything until the new, commercial kitchen came online a few weeks ago.

Still, Johnson says it was “not as life changing as some people seem to think. The fire itself was a shock, but it didn’t feel like this massive tragedy. Nobody got hurt. No pets were lost or anything like that.” And some of the most critical equipment — such as a hard-to-find “flame weeder,” a propane tank that scorches weeds — was stored safely in a separate shed.

For Johnson, it was far more life changing to buy food at a grocery store for the first time in a decade.

“All of us who work here are so used to eating from the place,” he says. “I discovered it’s pretty expensive to buy food, even regular old grocery-store food. It was a real eye opener.”

Thanks to the fast money, Pete’s Greens has rebounded impressively. Construction on the new barn started in mid-March and is expected to be complete by Christmastime, at the latest. All workers were rehired, and next year Johnson expects to add to his workforce. Every restaurant he supplies stuck with him through the temporary disruption, he says.

Although fire investigators never determined the cause of the blaze, Johnson suspects it was a three-phase power converter used to run an industrial-size salad spinner. The new barn is wired for three-phase power, which is used to run larger electric motors, but the old barn wasn’t and required a converter. Johnson says he found the converter blown to pieces in the barn rubble, while items beside it were merely charred.

The new barn also has fire-grade sheetrock, Johnson says, so while a fire could burn some of the interior, “It would be very difficult for the fire to get into the structure.”

“We got it all figured out now,” he says.