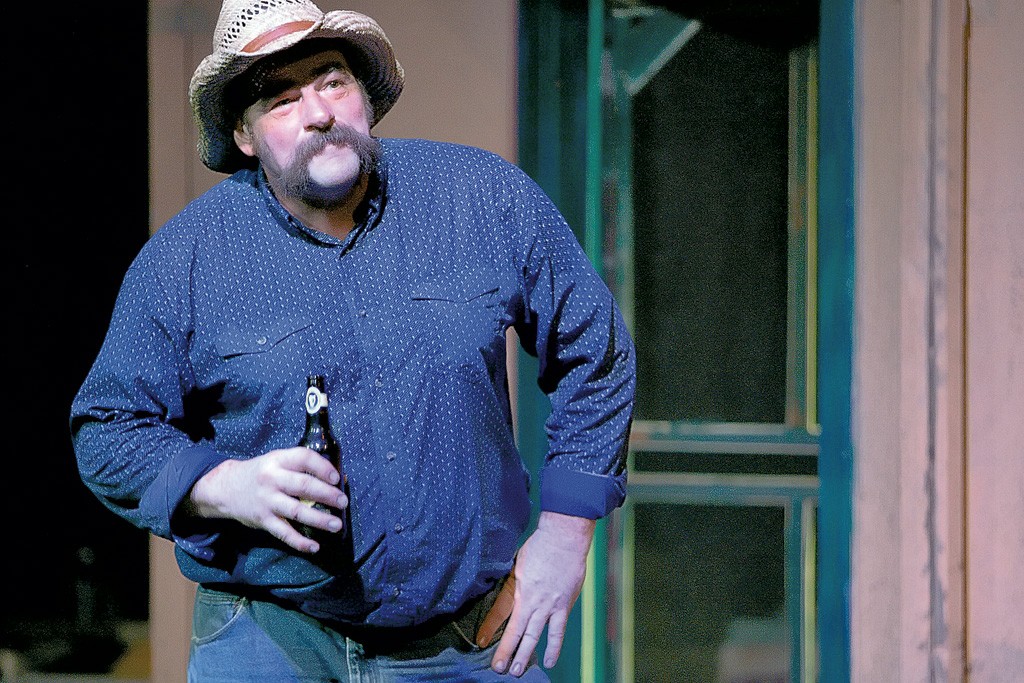 On Tuesday, June 17, local officials, artists and media gathered at Burlington's BCA Center to announce the winner of the first annual Herb Lockwood Prize in the Arts. At $10,000, it's easily the biggest individual arts award in the state. Though the group gathered in a gallery — Burlington City Arts serves as the prize's nonprofit fiduciary agent — the honoree turned out to be a theater guy: Steve Small, a Vermont actor and director of Addison Repertory Theater (A.R.T.) in Middlebury, a theater training program for high schoolers.

Small had never heard of the Herb Lockwood Prize before he won it. That's because the planning was carried out in almost complete secrecy. "I think he just about fell off his chair," says Burlington writer and artist Todd Lockwood, who organized and launched the prize this spring. His younger brother, for whom the honor was named, died in 1987.

"It took a little while to catch my breath," Small says, admitting to an initial suspicion that the whole thing was a hoax. After all, how often does someone receive a call saying they've won an unsolicited $10,000 for their life's work?

The selection process was modeled after that of the Nobel Prize, Lockwood explains. Nominations were solicited from about two dozen anonymous "arts advisers" throughout the state. Then a committee of five (including one BCA staffer) selected the winner based on three criteria: a high caliber of technical ability and creative talent; an inspirational influence on other artists; and a "beneficent" influence on the community.

Small, a Vermont native, worked professionally on Broadway sets and got gigs acting in television shows before moving back to his home state with the intention of shoring up its theater scene. The 57-year-old has worked with A.R.T. for 29 years. The intensive program trains students in acting, set design and other theater vocations; Small says it has a 100 percent placement rate for students who wish to continue on to conservatory or collegiate theater programs.

Small is also considered one of the best performers in the state, says Lockwood. "I think a lot of people come away from his shows and his plays thinking, Wow! What's this guy doing in Vermont?" he says.

The Herb Lockwood Prize was born from a conversation between Lockwood and an unidentified "artist friend" last fall. Lockwood remembers that the two identified an "issue" they wanted to remedy: Despite Vermont's rich artistic culture, conventional wisdom still holds that good art just doesn't happen here.

"One idea that came out of that was putting a spotlight on some of the amazing work going on around here, which would help rid us of the question of whether great art or important art can ever happen in Vermont in the first place," Lockwood says.

That "spotlight," he decided, would be a prize — not a grant for future work but a recognition of existing and continuing work — and a significant one. The prize's purse began at $5,000, donated by the Lockwood family; the remainder was raised in private donations. The winner is under no obligation to spend the prize money in any particular way.

Though Lockwood says the prize was created to meet a specific need — recognition for significant art — it soon became closely tied in his mind to memories of his late brother, and to Herb's artistic legacy in the area.

Todd and Herb Lockwood moved to Burlington in the early 1980s, at the dawn of an era that Todd considers the Queen City's golden age. "It was just kind of a magnetic thing," Lockwood, now 63, remembers of the artists and entrepreneurs drawn to the area in the '80s and early '90s. "All these amazing things happened under this umbrella of Burlington culture and its belief system — the belief in doing things for the right reason."

Herb was one of those artists, his brother recalls: a writer, cartoonist, painter, sculptor and musician who arrived in 1982 and quickly found his place in the artistic community. His home became something of a hub for creative types, says Lockwood. (A musician and photographer himself, Todd Lockwood founded the Brautigan Library for unpublished books — based on cult author Richard Brautigan's 1966 book The Abortion: An Historical Romance — and established White Crow recording studio, now defunct.) At Herb's memorial service, at the Unitarian Universalist Church on Pearl Street, Lockwood recalls that the number of attendees floored his parents.

"It was just packed with people up to their seventies, and we had no idea how these people even knew Herb," he says. "We quickly realized he had this huge reach in a bunch of different ways."

Lockwood adds that Small, whose students have gone on to work on Broadway shows and behind the scenes on television shows including "The Office," is a perfect example of a Vermont artist who extends his gifts outward.