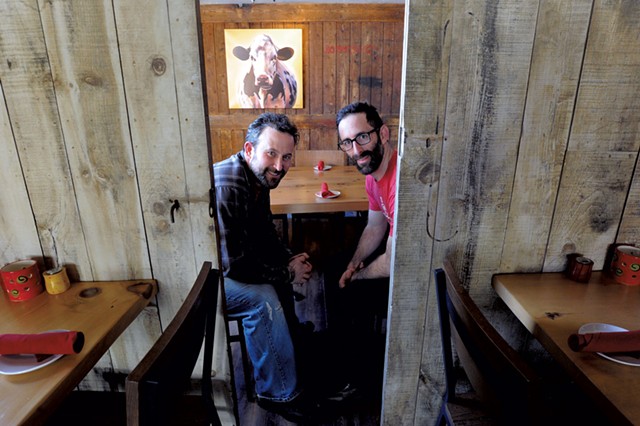 Waterbury, last Thursday evening: A local strummer sat by the stairs at Zenbarn, twanging homespun folk tunes and gifting warm smiles to all passersby. At the end of the bar, the chef from another of the town's restaurants lounged on a barstool sipping bourbon. At a high top nearby, two girls in their early twenties played tabletop word games, sipping pilsner from trumpet-shaped glasses. Behind them on a big-screen TV, the University of Vermont men's basketball team lost a withering March Madness match to Purdue University.

Even with the music and chatter of a full house, the room was not too loud to prevent civilized conversation.

Zenbarn opened in Waterbury Center last November. In 1989, long before the new restaurant/wellness hub was even a flicker of an idea, Diane and Carl Huber transformed the old dairy barn on Guptil Road into Tanglewoods Restaurant. For the next 25 years, they served pastas, steaks and seafood, before closing for retirement in October 2014. A year later, Ari and Noah Fishman, who grew up across the road, enlisted an investor to help them purchase the property over time.

The brothers and their family spent most of 2016 renovating and laying plans. They wainscoted the dining room with graying barn wood, installed foosball and shuffleboard tables, and hung incandescent glass pendants on wooden pulleys above the bar, bathing the space in gentle champagne light. Upstairs, there's an open studio for yoga, Pilates, craft workshops and mindfulness classes, as well as quarters for overnight lodging. This summer, Noah Fishman's one-acre home farm, along with a plot on the Zenbarn property, will supply the restaurant with fresh produce. All of these amenities are available for weddings, conferences and other group functions.

But, as usual, I was just there for the food.

In December, team Fishman hired chef Scott Collins, whose past includes time at the Dining Room at Edson Hill, A Single Pebble and, long ago, the Waiting Room in Burlington. Early versions of his menu offered dishes such as spice-laced goat kafte, but goat didn't sell well among the local crowd, so it has since given way to more predictable Vermont-y fare. Namely: Brussels sprouts crisped with pancetta and finished with a poached egg, arugula with beets and chèvre, and seared half chicken. 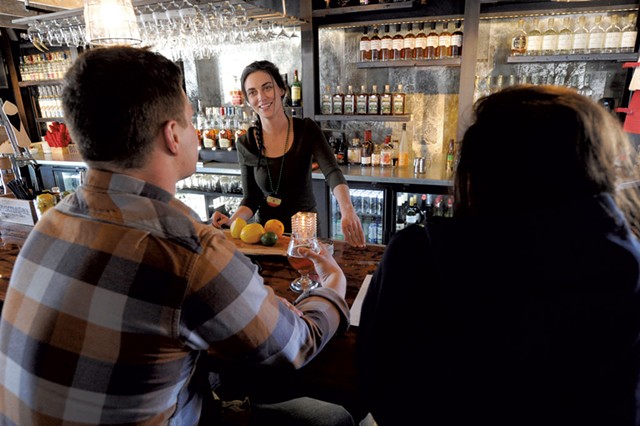 You might preface such things with a cocktail — behind the bar, Vermont-made vodka, gin, rum, tequila and whiskey stand in neat, illuminated rows. Bartenders mix them into drinks such as the Shavasana ($11) — an off-dry, vaguely floral blend of Caledonia Spirits' Barr Hill gin, coconut water and chamomile splashed with Cointreau — or a spicy, apple-infused WhistlePig whiskey sipper dubbed Feel the Bern ($14).

The beer list isn't extravagant, but it hits all the hip-kid bases. Find a handful of dank pale ales and IPAs, along with cans of the Alchemist's Focal Banger and Heady Topper, and neat out-of-state and old-world styles that you won't find elsewhere, thanks to a close relationship with nearby Vermont Beer Shepherd.

The beers are delivered through meticulously clean tap lines — last week, I enjoyed one of the better pours of Hermit Thrush Brewery's trenchant, amber Party Guy sour that I've tasted outside the brewery. And my husband was surprised at how well he enjoyed a glass of Magic Hat's Taken for Granite American IPA (the first in a new sold-in-Vermont-only series).

On an early February visit, a plate of long-stemmed shimeji and scallop-edged maitake mushrooms ($7), encased in bubbly tempura and drizzled with thickened sweet soy sauce, were so addictive that I couldn't resist ordering them upon return. They were just as good the second time around. And I'd go back again just to eat the translucent, tawny potato chips ($4), which should probably be mass-produced and sold in bags.

Visitors seeking a less-fried start might look toward a salad of verdant baby kale ($12), draped with silver anchovies and punctuated with confit duck and shaved fennel. It's a seemingly disparate set of flavors that tango over the tongue to fantastic effect. 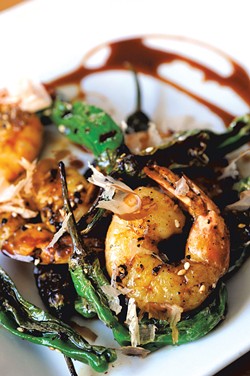 Collins' ideas are often spot-on, his culinary hand generally noninterventionist. But at times, his gentle style leaves leeway for indelicacy. In a peanut-scattered side of broccoli rabe ($7), a splash of Chinese vinegar cut through the smoky char, but the untrimmed stems were too woody toward the bottom. And honey-glazed carrots, dusted with Ethiopian berbere, were roasted a few shades too firm — less crunch would have been better.

These minor transgressions faded quickly when our server (staff is attentive, competent and easygoing) delivered a flawless, mid-rare burger ($15). It was juicy and topped with molten Grafton Village cheddar, bacon and beer-braised onions. I've said this before: If a bar can nail the burger, it'll likely succeed, and this patty was everything it needed to be. Not least, it was local, grass-fed beef and a hefty half pound in weight.

On another night, languid drapes of house-rolled pappardelle ($19), curled around wild mushrooms tossed with leeks and cream, made a simple but opulent entrée. It was upscale yet informal — an unexpected joy for a casual Thursday-night date. Across the table, my husband's skirt steak ($22) was wood-smoky, pink in the middle, and spread with garlic-green chimichurri over smashed fingerlings and a pool of creamed sweet corn.

After that, a split blueberry biscuit ($7) with a dollop of sweet cream was all flakes and butter, and a few berries. It came as the music man sang his goodbye. Just after nine, we wandered into the night with a sugary spring in our step and a song to hum on our way home.