Everyone's heard of Bonnie Parker and Clyde Barrow, the gangster couple who robbed and shotgunned their way into American folklore during the Great Depression. Nearly 90 years after they were killed in a shoot-out with police, Bonnie and Clyde remain embedded in pop culture and synonymous with lovers on the run. But they were hardly the first American gangster couple — or even the best. That title could well belong to Margaret and Richard Whittemore, aka Tiger Girl and the Candy Kid.

"Everybody knows who Bonnie and Clyde were," author Glenn Stout said in a recent interview. "But Richard and Margaret were more successful, better looking and made a lot more money."

They were also, for a period in the mid-1920s, two of the most famous people in America, criminal or otherwise.

"They were as famous then as Kim Kardashian and Kanye [West] are now," Stout said.

In his new book, Tiger Girl and the Candy Kid: America's Original Gangster Couple, Stout introduces us to the Whittemores, whose dramatic and bloody exploits captivated America in the Jazz Age but have since been lost to history. Through meticulous research and cinematic storytelling, he re-creates the duo's thrilling and ultimately tragic story. Stout also explores how the couple shaped archetypes of American gangsters, even as they were largely forgotten as individuals.

Stout, who has lived in Vermont for more than 20 years, is the author of several sports histories, including The Pats: An Illustrated History of the New England Patriots; Fenway 1912: The Birth of a Ballpark, a Championship Season, and Fenway's Remarkable First Year; and Young Woman and the Sea: How Trudy Ederle Conquered the English Channel and Inspired the World. That last tale is in the works as a Disney+ film starring Daisy Ridley.

Stout was also the longtime series editor of The Best American Sports Writing, an annual anthology that published its final edition in 2020. He will helm a new series, The Year's Best Sports Writing, due out this fall. Tiger Girl and the Candy Kid is Stout's 100th book — that number includes all his works as a writer, ghostwriter or editor.

Seven Days spoke with him by phone from his home in Alburgh.

SEVEN DAYS: Most people know you as a sportswriter, so it's interesting that your 100th book has nothing to do with sports. Was this a passion project?

GLENN STOUT: It really was. I was onto this story in 2006, when I stumbled onto it working on my biography of Gertrude Ederle, Young Woman and the Sea. I kept seeing these headlines about Tiger Girl and the Candy Kid. I was initially intrigued by their nicknames — who wouldn't be? The more I researched the story, the more I wondered, Why didn't I know about them? In the New York Times alone there were 40 front-page stories about them and their gang in a six-month period. How did they become forgotten? 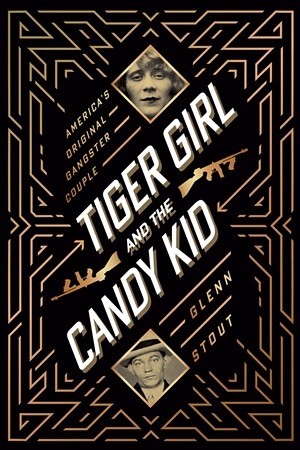 GS: Part of it was that this was before talking pictures. Once talking pictures came in, so did newsreels with voice-overs. So the Depression-era gangsters — Bonnie and Clyde, John Dillinger, Pretty Boy Floyd — they could pair pictures and films of them with voice-over narration and deliver it into theaters every day in between features. That wasn't the case with Tiger Girl and the Candy Kid. They existed only in print.

Another factor is, after the 1920s, after the stock market crash and the Great Depression, people didn't want to look back at the 1920s. It was too painful to go back and think about how great everything was. So you had Bonnie and Clyde and Dillinger in newsreels, and Richard and Margaret just got left behind. They'd occasionally be talked about as two of the most notorious criminals of the time, but, by World War II, even that had faded.

SD: And yet you make the case that they had a profound impact on gangster archetypes in American pop culture. How did that happen?

GS: Many of the journalists who covered them later went to Hollywood and became screenwriters and producers. And there are elements of Tiger Girl and the Candy Kid in a host of gangster films produced in the 1930s, like The Roaring Twenties [based on a story] by Mark Hellinger.

SD: The Whittemores were widely covered by newspapers. As you note in the book, journalism was different in the 1920s. There were no probing, Vanity Fair-like profiles. Yet you paint a vivid and detailed picture of who they were. How did you conjure them from straight news reports?

GS: The bulk of the research is from period newspapers. And if you go back 80, 100 years, major metropolitan areas didn't just have one or two newspapers. Buffalo alone, where some of the story takes place, had six daily newspapers. Baltimore had four. New York City had about a dozen.

So the way you take a two-dimensional story and make it three-dimensional — and this is the same process I used for sports history, too — is you look at everything. If you look at six or eight stories about a single jewel heist, each story contributes a little bit more. One might mention the make of the getaway car. Another might mention what the robber said. Another might say how they were dressed.

The metaphor I use is that it's kind of like a 3D printer. You're just layering these accounts until eventually you have enough information to bring it to life. Then it suddenly becomes cinematic and tells a story rather than just being a story.

SD: I gather that was easier to do with Richard than it was with Margaret.

GS: There was a certain chauvinism to the journalism of the age, where women were dismissed — even Margaret was dismissed. She wasn't really even in the newspapers until their final arrest. She's quoted a lot, but there really aren't the details of her that there were about Richard or other members of the gang. So you kind of tell her story through the story of women and culture of the time: as a flapper, as a working-class woman with few options, someone who's obsessed with the movies. That was a challenge, and my fear going in was: Can I make Margaret a three-dimensional character?

A friend of mine gave me the best advice after he read an early draft. He said, "More tiger, less candy."

SD: You give her top billing for the book.

GS: They were a pair. Even though she wasn't participating in the crimes as actively as he did, she benefited materially. She was very much a part of it. She was the gun moll.

In New York at the time there was a pretty strict gun-control law called the Sullivan Act, where if you were arrested with a gun, you were gonna go to prison. So the gang said, "Well, we'll have the woman carry the guns. That way, we won't get caught. We're all convicted felons, but she's a woman. They won't arrest her. They'll go easy on her."

Because at the time, there was a repeating story of "flappers gone bad," young women led astray by a man. Margaret kind of fit that mold, though I don't think she was led astray. But they thought the police might think that, so they'd have Margaret go get the guns at Penn Station before a job and bring them back so they wouldn't get caught carrying around all this heavy weaponry.

GS: They took advantage of a cultural prejudice of the time that said women aren't evil, men are.

SD: Do you see parallels in Richard and Margaret's story today?

GS: There is some resonance between this time and that time. Richard and Margaret were coming out of World War I, a pandemic and an economic downturn. So there's that. And that was the beginning of the age of celebrity, and they were kind of famous for being famous, so there's some resonance there, too. In many ways, we're still living in the world that was created in the 1920s. And Margaret and Richard's experience says a lot about that.